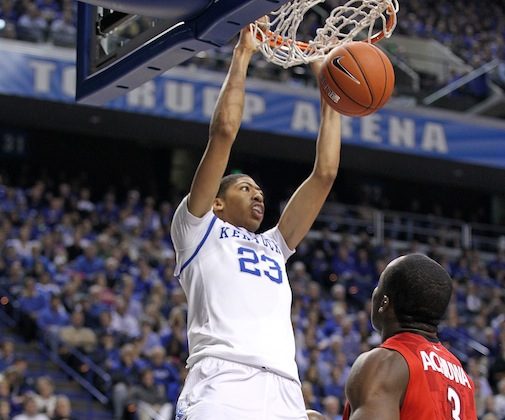 Several big games last week have shaken up the rankings. Records as of December 4th:

10. Xavier (6-0)—The Musketeers have beaten Georgia, Vanderbilt, and Purdue in successive contests. Up next are a couple more quality opponents in Butler and Cincinnati. Previous: NR

9. Marquette (7-0)—After beating in-state rival Wisconsin 61–54 Saturday the Golden Eagles are sitting pretty with a scoring margin of 24 per contest. Previous: NR

7. Missouri (7-0)—The surprising Tigers have averaged to outscore their opponents by 27.9 per contest. They’ll be tested again against Villanova Tuesday. Previous: 10

6. Duke (7-1)—Duke has had several great wins (Kansas, Michigan, and Michigan State) but were badly outplayed by Ohio State in Columbus. Previous: 3

5. Baylor (7-0)—The Bears downed previously unbeaten Northwestern 69–41 Sunday in what may be their best win of the season. All seven wins have been by double-digits. Previous: 8

4. North Carolina (6-2)—The Tar Heels mustered up enough to down Wisconsin 60–57 Wednesday, before falling in the final seconds to Kentucky 73–72 at Rupp on Saturday. Previous: 4

3. Syracuse (8-0)—The Orangemen have handled the distractions well thus far. This week’s 72–68 win over Florida was their best of the season. Previous: 6

2. Ohio State (8-0)—The Buckeyes did their part in the ACC/Big Ten Challenge Tuesday, throttling Duke 85–63, though Jared Sullinger’s status will be key this week against Kansas. Previous: 2

1. Kentucky (8-0)—The shot-blocking Wildcats followed their 18-block effort against St. John’s Thursday with a last-second rejection to seal their win over North Carolina Saturday. Previous: 1