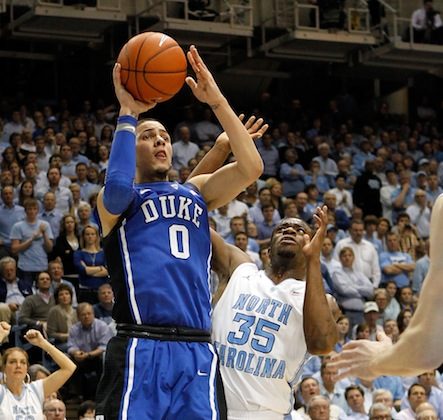 Austin Rivers’s (0) last-second three-pointer against North Carolina was his sixth of the day and gave him 29 points in the winning effort. (Streeter Lecka/Getty Images)
College Sports

10. Marquette (21–5)—The Golden Eagles have quietly won nine of their last ten games to move into second place with a 10–3 record in an albeit weakened Big East. This week: at Connecticut (Saturday). Previous: NR

8. Michigan State (20–5)—Spartans jump back into the rankings here with wins in five of their last six games, punctuated by a 58–48 win at Ohio State to put them back on top of the conference. This week: versus Wisconsin (Thursday), at Purdue (Sunday). Previous: NR

7. North Carolina (21–4)—Roy Williams’s club recovered nicely from a shocking last-second home loss to Duke Wednesday with a 70–52 win over 19–5 Virginia. This week: at Miami (Wednesday), versus Clemson (Saturday). Previous: 6

6. Ohio State (21–4)—Buckeyes move back a bit after putting up just 48 points in a home loss to Michigan State, but are still tied for the Big Ten lead. This week: at Minnesota (Tuesday), at Michigan (Saturday). Previous: 4

5. Duke (21–4)—Blue Devils’ shocking win Wednesday at North Carolina was huge for the team, given their recent losses, and keeps them tied atop the ACC. This week: versus N.C. State (Thursday), at Boston College (Sunday). Previous: 8

4. Kansas (20–5)—Jayhawks won convincingly at Baylor 68–54 last Monday night, but this Monday night’s test is at a place that may be even tougher. This week: at Kansas State (Monday), versus Texas Tech (Saturday). Previous: 7

3. Missouri (23–2)—The first-place Tigers passed another test with a 72–57 win over Baylor Saturday and have a chance this week to avenge an earlier loss this week against Oklahoma State. This week: versus Oklahoma State (Wednesday), at Texas A&M (Saturday). Previous: 3

2. Syracuse (25–1)—Orangemen look like they stabilized since the return of center Fab Melo, though coach Boeheim wasn’t pleased after a 64–61 OT win over Georgetown last Monday. This week: at Louisville (Monday), at Rutgers (Saturday). Previous: 2

1. Kentucky (25–1)—Wildcats have now won 17 straight since their lone, one-point loss at Indiana and have just five games remaining until the SEC tournament. This week: versus Mississippi (Saturday). Previous: 1