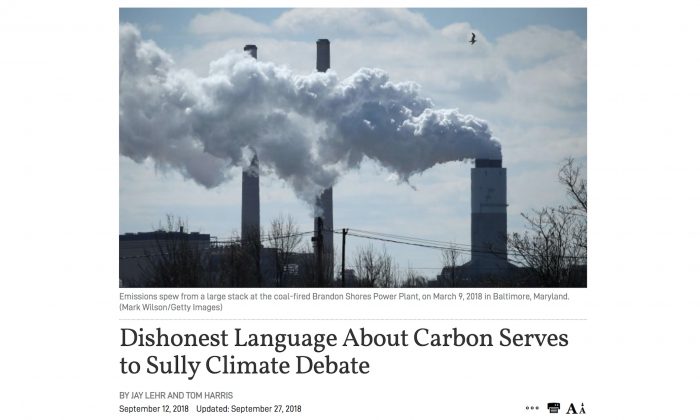 Letter to the Editor: The Epoch Times Breaks the Taboo of the Carbon Footprint

The reliable and seemingly most objective media, The Epoch Times, has been presenting a lot of significant information that the mainstream media ignore, in a comprehensive, easy to understand manner. I have been reading The Epoch Times almost daily on theepochtimes.com.

I was delighted to see the breaking of the taboo of the carbon footprint in the Sept. 12 article, “Dishonest Language About Carbon Serves to Sully Climate Debate,” by Jay Lehr and Tom Harris.

I encountered the fruits of the global warming ideology (recently changed to climate science) while working in the energy field, witnessing the Ontario multibillion-dollar windmill fiasco.

I briefly examined and discarded ideas of “carbon footprint” and “decarbonization,” realizing that changes in the earth’s emission of carbon dioxide i.e. CO2 to the atmosphere come mostly from the oceans and definitely do not lead but follow, with delay, earth temperature changes, typically driven almost exclusively by hardly predictable sun activities!

NGO engineers kept warning the Ontario government that changing winds cause inherent intermittent energy delivery for windmills. An addition of quickly reacting gas plants, or even more expensive conversion and storage facilities, is needed to fill up the gaps. Ontario nuclear power has been already supplemented by some gas plants to cover daily electricity peaks, but Ontario windmill-usable winds blow predominantly at night!

I organized in 2012 a series of six conferences covering a wide range of energy challenges including those described in this text. The warnings as well as those conferences were ignored by both government and the mainstream media.

In 2017 America woke up and abandoned all costly, bizarre environmental programs including reduction of CO2 emissions. The new Ontario Government follows now in 2018, starting with abandoning subsidies for windmills and lowering the price of gasoline by 5 cents a liter off the provincial carbon tax.

Meanwhile, overpowering “Climate Science” ideology, via essentially all governments (the United States and Ontario excepted) and academia worldwide, has been promoting the urgent need to minimize the “carbon footprint” at the cost of $billions to “decarbonize the planet.” Minimizing the “carbon footprint” by “decarbonization” seems to be now a worldwide revered holy religion, a taboo, undisputable subject of faith.

Jay Lehr and Tom Harris argue that using the term “carbon” as a synonym for CO2 conjures up visions of solid coal lumps, soot or coal dust, none of which is like the plant life-giving CO2, trace gas in air we breathe.

Jay and Tom: “The atmosphere’s 410 parts per million of CO2 today has already absorbed essentially all of the heat’s wavelength the Earth has to give. Therefore, further additions of carbon dioxide can have no measurable impact on the Earth’s temperature or the greenhouse effect.”

In summary, the deceitful, deliberately false ideology of carbon footprint and decarbonization aims at abandoning “inexpensive energy by eliminating life-giving fossil fuels and subject society to further government control, thereby reducing individual freedom, moving our country closer to socialism and away from capitalism.”

Note that we still keep paying billions of dollars to subsidize senseless “decarbonization” schemes, e.g. by adding less effective (66 percent the effectiveness of gasoline), more expensive ethanol to gasoline. We also overpay for corn and soybean products; in 2001 American fuel ethanol was produced from 40 percent of the corn harvest and from 15 percent of soybeans respectively.

Dr. Jay Lehr, the science director of The Heartland Institute in Arlington Heights, Illinois, and Tom Harris, executive director in Ottawa, Canada-based International Climate Science Coalition emphasize that using the term “carbon” instead of “carbon dioxide” or “CO2” is an intentional distortion aimed at provoking fear and those who would advance that distortion must be called out every time.