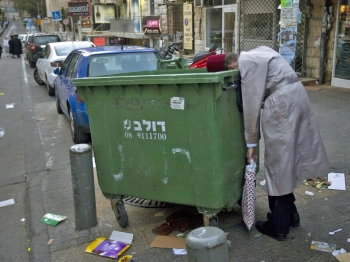 A drunk, ultra-Orthodox Jewish man leans over a rubbish container after a Jewish celebration. Because people engage in certain behaviour it doesn't mean that they are their preferred behaviours, says author Daniel Akst. (Menahem Kahana/AFP/Getty Images)
Opinion

The Enemy Within: Self Control in an Age of Excess

I can resist anything but temptation.
Oscar Wilde, Lady Windermere’s Fan, 1892, Act I

While much of human history has been devoted to dealing with scarcity, the 21st century is posing quite a different challenge—how to deal with plenty.

According to Daniel Akst, author of We Have Met the Enemy: Self Control in an Age of Excess, we have evolved to live in an environment of scarcity, but our environment has changed. The industrial world can provide everything and anything, often instantly with new technology, but we have not adapted.

“The topic is really moderation in the face of freedom and affluence,” he says.

He noted that while there are already great demands on “appetite regulation” in modern societies, the evidence illustrates that we are killing ourselves with excess.

He pointed to the growing numbers of deaths as a result of lack of self control, noting that over 400,000 people die in America each year from smoking related diseases and about as many die from obesity, and other related illnesses.

“Of the 2.5 million deaths, close to half could be prevented with healthier lives,” he told the audience.

But what can be done? Civil libertarians would say the issue involves freedom of choice – shouldn’t we be allowed to choose whether we smoke, drink or eat too much?

Mr Akst believes that that argument only works if an individual is accordingly left to take full responsibility for their choices. In the industrialised world, however, the whole community shares the burden of an individual’s self abuse through socialised medicine and welfare.

“When we socialise [society] the costs mean [that] I am now invested in your choices, so your bad choices become my problem,” he said. “If we are willing to let people die in the streets as a result of their poor choices then we don’t have that problem, but we are not.”

Mr Akst said addressing self control was not a new issue. He referred to the Greek philosophers who, he says, understood the challenges involved in controlling desires, but who addressed those challenges as a point of mastery and skill.

“These guys were obsessed with this and they had a terror of slavery and being enslaved to your own desires was just as bad as being a slave to some other person,” he said.

As our ability to manage self control seems to have changed little since that time, the Greeks have valuable lessons to teach a modern world, he said, referring to the tale of Odysseus, from Homer’s epic poem The Odyssey.

In the tale, Odysseus is on his way home from the Trojan War when he realises his ship is approaching the Sirens whose seductive song is known to lure crews to their deaths. Acknowledging his desire to hear the Sirens, Odysseus instructs his crew to tie him to the mast and ignore any instruction he might give while he is under the influence of the songs.

“That’s the first known episode of what we call pre-commitment, of binding yourself, constraining your future choices in order to live up to the preferred desires you have today,” Mr Akst said.

Controlling behaviour, however, is not about becoming zealous and suppressing all desires as they are a fundamental part of human nature. He says: “This gives us our personhood and in turn what separates us from beasts.”

Self control, he believes, is “the ability to turn our backs on an impulse and go in a different direction and live up to some of the other preferences that we have”.

He notes that we have a range of desires and behaviours, but says: “Because people engage in certain behavior, it doesn’t mean that they are their preferred behaviours.”

Continued on the next page … Anticipation