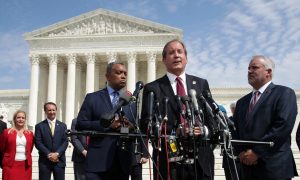 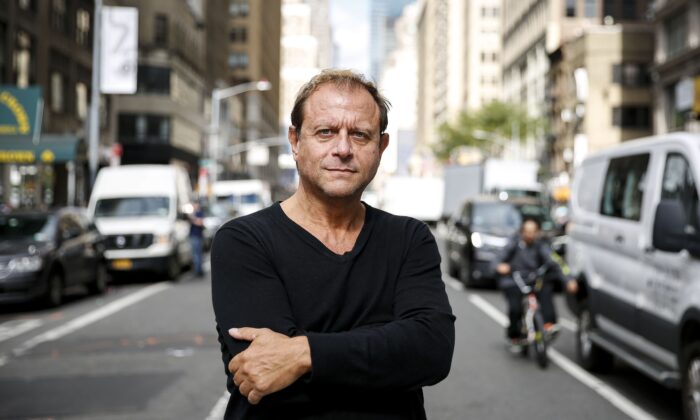 Dr. Michael Rectenwald, a former professor at New York University and author of “The Google Archipelago: The Digital Gulag and the Simulation of Freedom", in New York City on Oct. 4, 2019. (Samira Bouaou/The Epoch Times)
US Features

Giant tech companies, particularly those controlling the flow of information on the internet, are marching toward the creation of their own brand of a socialist system, says Michael Rectenwald, a former liberal studies professor at New York University and author of “Google Archipelago: The Digital Gulag and the Simulation of Freedom.”

Corporations such as Google and Facebook have aligned themselves with leftist, progressive ideology and have practiced what Rectenwald calls “corporate leftism,” an ideology that, in practice, bears some resemblance to the totalitarian system practiced by the communist regime in China.

Rectenwald argues that the ideological tendencies of those corporations are particularly pernicious because the expanding “internet of things” increasingly permeates the digital realm into people’s lives.

“Cameras, AI bots, electronic door keys, cash registers, and numerous other means of data collection … will make possible time-stamping every human activity” out of home, and many in-home too, he said.

All this data can be easily put into digital dossiers parsed by algorithms to create a digital image of each individual.

While the companies are open about the practice of collecting user data to personalize ads and products for them, increasingly, there’s evidence that the companies are also using this data to reward or punish users for aligning or diverging from the companies’ preferred worldview.

“Big Digital sets the boundaries of acceptable discourse in digital spaces, allowing some positions and precluding others,” Rectenwald said in his book.

The near-inescapable data collection, combined with the imposition of political correctness, forms what he calls the “Google Archipelago,” a riff on Aleksandr Solzhenitsyn’s “The Gulag Archipelago,” a seminal description of the brutal web of labor camps of Soviet Russia.

While the Google Archipelago is “light on the body” compared to the deadliness of the Soviet Gulag, Rectenwald makes a parallel between the ability of both to effectively “disappear” people.

“The public square outside of the digital realm has become largely irrelevant by virtue of the fact that everything’s happening in the digital square,” he said.

Thus, digital authoritarians have a growing power to delete people from public discourse and even from society more broadly.

“Their objectives are the effective political death and financial and social ruination of their political opponents,” Rectenwald says in the book.

Rectenwald acknowledges the apparent contradiction between the anti-capitalist sentiments of the progressive left and its endorsing of massive corporations such as Facebook and Google.

Yet, a similar contradiction has been a part of Marxism since its inception.

Karl Marx and his co-author and benefactor Friedrich Engels postulated that there would be no government in the communist utopia. The world’s workers would unite, they said, seize the means of production, and later, the government formed by the workers would wither on its own. They never explained why the proletariat (or its supposed representatives) would agree to give up the expansive power necessary to control the means of production. None of the communist regimes that ever seized power have been willing to do so.

Just as all the communist regimes in the world have been willing to form governments and only contemplate their withering away sometime in the distant future, today’s leftists seem willing to support left-leaning corporations based on similarly vague premises.

“The left is happy that they are supposedly closer to reaching their goals, regardless of the fact that corporations are acting as the major levers to achieve said goals,” Rectenwald said in an email. “The left is satisfied that woke capitalism reflects their values back to them, despite the fact that corporate power is thereby strengthened in the process. The antipathy that the left traditionally has held for corporations is mitigated by corporate advertising and other rhetoric reflecting their ideals.”

This trait also resembles the “socialism with Chinese characteristics” espoused by the largest remaining communist regime in the world.

While many Western socialists scoff at the idea that the Chinese regime is socialist at all, that’s not what the Chinese populace hears from their rulers. As the party postulates, the country is simply in the “first stage of communism,” which “looks a lot like capitalism”—that’s to last 100 years, Robert Lawrence Kuhn, a longtime adviser to the regime, wrote in 2011.

Just two years ago, the regime’s leader, Xi Jinping, reaffirmed that the party is as dedicated to socialism as ever, planning to achieve “socialist modernization” by 2035 and become a “modern socialist country” by 2050.

Yet, there could be a more prosaic explanation for Big Digital’s leftism.

Brian Amerige, former senior Facebook engineer, said in a Facebook message, “From the inside of these companies, they see the genuine dedication to making life better that big companies largely pursue and thus see their company as an exception to the evil capitalism they hear about everywhere else.”

The idea of a socialist utopia implemented via a mega-powerful corporation is not new. King Camp Gillette, the founder of Gillette Co., wrote two books expounding on his idea of corporate socialism, arguing that socialism could be better achieved through a “World Corporation,” which was also the title of his second book.

“Promoters [of incorporation] are the true socialists of this generation, the actual builders of a cooperative system which is eliminating competition, and in a practical business way reaching results which socialists have vainly tried to attain through legislation and agitation for centuries,” Gillette says in the 1910 book.

Rectenwald said, “World Corporation was a prospectus for developing a worldwide singular monopoly, which he envisioned as a complete, and completely benevolent, economic and governmental hegemon.”

Gillette’s book even says the World Corporation “will possess all knowledge of all men, and each individual mind will find complete expression through the great Corporate Mind,” echoing, in Rectenwald’s view, how Google sees itself today.

Rectenwald acknowledges that Big Digital leaders genuinely believe in leftist politics. He points out, however, that many aspects of leftism align with practical corporate interests too, at least for companies with monopolistic ambitions.

The leftist goals of open borders, or effectively open borders, benefit the corporate appetite for free movement of labor. The “identity politics” endorsed on the left benefits corporations, since the splintering of identity groups allows for the cultivation of new niche markets, Rectenwald said.

“The disruption of stable gender categories will eventually dismantle the family, the last bastion of influence other than the state and major monopolistic powers,” he said in a Sept. 28 speech at the Libertarian Scholars Conference at King’s College in New York.

Global corporations would also benefit from one international set of rules, thus siding with the left in promoting internationalism with the ultimate goal of a global government.

“The politics that most clearly aligns with the worldwide global interests of monopoly corporations is contemporary left-wing politics,” he said.

He goes even deeper, though, arguing that Big Digital is especially prone to totalitarian leftism since socialist thinking is somewhat “algorithmic.”

“If A is the desired object, then these are the necessary steps to obtain A, including, if necessary, not-A,” he said. “The ends utterly determine the means, including the commission of acts that are antithetical, morally and politically, to the ends sought.”

That’s why Vladimir Lenin, after taking over Russia, “putatively on behalf of the working class” went on and “ordered the first post-revolutionary striking government workers shot dead,” Rectenwald said.

One way that Big Digital’s politics manifest is through its “hate speech” policies, according to Rectenwald. Google and other tech companies have centered their “hate speech” rules on countering ideologies of supremacy, he said.

Rectenwald pointed to several problems with this approach, including a massive blind spot, since more people were actually killed in the 20th century in the name of equality—the creed of the left—than supremacy.

This blind spot is to be expected, he suggests, since the Big Digital companies “represent leftism—to themselves and their constituencies—as the default no-fault political belief system.”

Another problem is the inability to clearly define what is and isn’t hate speech.

Facebook, for instance, openly acknowledges that it’s unable to clearly draw the line where hate speech begins. Its chief executive, Mark Zuckerberg, even reportedly acknowledged behind closed doors that the company has “struggled” with bias in content policing for a long time.

There’s also evidence that Big Tech’s decisions on what is and isn’t hate speech are influenced by the quasi-Marxist intersectional theory, where people are lumped into “oppressed” and “oppressor” baskets, based on general criteria such as skin color, gender, and sexual behavior. By and large, only infractions against the “oppressed” would count as hateful while the “oppressors” would be targeted for heightened scrutiny.

The most scrutinized, however, seem to be those who criticize the theory itself, even if they personally belong to an “oppressed” group.

Rectenwald said that the reduction of history as a fight between oppressors and oppressed is just a replacement for the Marxist reduction of history as a fight between the exploited and exploiters. Yet, the left is unfaithful to the “oppressed,” he said, giving the example of attacks on Candace Owens, an outspoken black woman who’s been a target of the most severe racial slurs and even physical attacks from the left for her conservative views.

Facebook, in fact, encouraged some of its employees to probe Owens’s background for anything that could give it grounds to kick her off its platforms, according to an internal Facebook document described and partially leaked to Breitbart.

Furthermore, suppression of “hate speech” raises the issue of overreach.

Degrading rhetoric was indeed used in the past to make people more willing to harm others. But most of the time, degrading speech (especially online) doesn’t lead to any such dire consequences, Rectenwald said.

Rectenwald said that a way to escape the Google Archipelago lies in rejecting its “narratives that tell us that we are a mere series of digits.”

“The 19th century reduced the world to mere matter. The 20th century reduced human beings to material machines constructed of flesh and bone. When materialism reigns, and there is nothing but matter, then literally nothing matters, including human life,” he said.

“Now, the 21st century would reduce us to zeros and ones—or, that is, to zeros, period. We must counter this false narrative with truth that restores us to our true natures as beings of value far beyond what the materialists and now the digital reductionists would have us believe.”