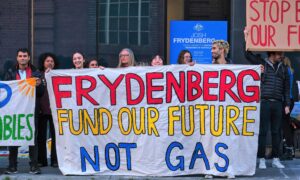 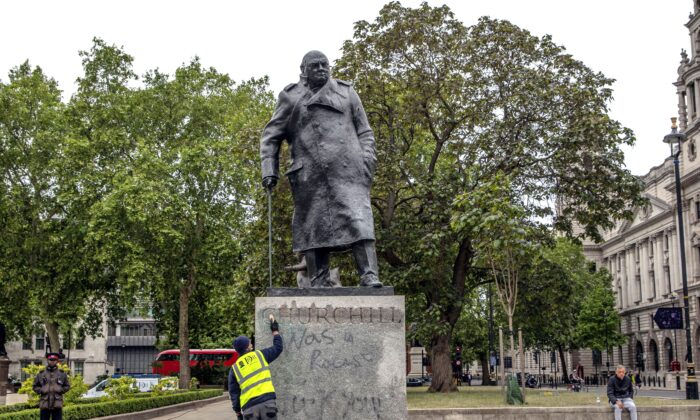 A worker cleans the statue of former prime minister Winston Churchill in London’s Parliament Square that had been spray painted with graffiti during a Black Lives Matter protest on June 8, 2020. (Dan Kitwood/Getty Images)
Viewpoints

The End of ‘Whig’ History and the Twilight of Nations

From the 17th to the 20th century, “Whigs” shaped an Anglo-American culture based on the universal principles of the European Enlightenment—individual liberty, free speech, property rights, rule of law, free enterprise, and democratic governance.

“Whig” histories were affirmative accounts of national origins that celebrated a progression from troubled or divided beginnings to more just and democratic stages of shared civic development. Whig historians told stories of people and institutions that strived to become better over time.

Up to the late 1960s, Whig history was commonly taught in schools throughout the nations of the “free world.” The development of the nation was regarded as something citizens could be proud of.

Academic Contempt for the Whig Interpretation

Some 90 years ago, Cambridge professor Herbert Butterfield published a short book entitled “The Whig Interpretation of History.” At first, the book went largely unnoticed, but after 1950, it became required reading for history majors in English-speaking universities.

Butterfield argued that “Whig” historians focused too much on events that ratified, if not glorified, a nation’s status. He reserved his strongest criticism for those who described the development of individual liberty and representative democracy as landmark achievements of freedom-loving, Anglo-American nations.

Despite being a practicing Christian, Butterfield deemphasized the value of moral conclusions: “If history can do anything,” he wrote, “it is to remind us that all our judgments are merely relative to time and circumstance.”

His contempt for the traditional canons of national histories led to the deconstruction of our past and the development of a moral equivalence between liberal-democratic philosophy and Marxist dogma. At the height of the Cold War, he implied that the conflict between Eastern totalitarianism and Western democracy amounted to nothing more than a competition between equally “self-righteous” value systems.

Over the remainder of the 20th century, the rejection of the “Whig interpretation” opened the door for the deconstruction of national histories and the development of cultural relativism. Fashionable academics suggested that there’s no objective distinction between good and bad forms of civic development. At the same time, they imagined a global political order that would bring peace and prosperity by uniting mankind around a more “progressive” narrative.

Butterfield contended that the Whig interpretation warped our perception of the past. As a result, expressing pride in the historical achievements of nations such as Great Britain, Canada, and the United States came to be regarded as a misguided and shameful disposition held only by rubes and illiterates. Self-loathing became the order of the day.

By the late 1980s, privileged professors and students at Stanford University were chanting, “Hey hey, ho ho, Western Civ has got to go” and the suicide of our nations was well underway.

Butterfield had set out to refine history and expose flaws in the conventional wisdom, but his academic vanity devalued the history of English-speaking peoples and ushered in a dangerous alternative.

History, like nature, abhors a vacuum, and soon after “Whig history” was discredited, a subdivision of the Communist Party of Great Britain, the Communist Party Historians Group, formed an influential group of British Marxist historians. Over several decades, British and American Marxists set out to develop a popular revolutionary tradition that would inspire activists and fellow travelers. Scholarly militants called for an end to the study of great leaders and inspirational ideas in favor of something they called “history from below.”

In the mid-20th century, leading Marxist academics such as Christopher Hill, Eric Hobsbawm, Raphael Samuel, and E.P. Thompson led the way. In 1952, several of them founded the “social history” journal Past and Present, and the long march of Anglo-American Marxists through our schools and universities picked up the pace. Ultimately, the left spawned its own version of “Whiggery” in the form of a progressive mega-narrative that demonizes our nationhood and looks forward to a borderless “global order.”

By the turn of the 21st century, Whig history, once the bond that held free nations together, was almost entirely removed from our schools. Neo-Marxists installed their own versions of the past into the mainstream of Western culture. The widespread introduction of the American “1619 Project” is a prominent example of our educational establishment’s surrender to the left.

The Whig interpretation that once tugged at the heartstrings of young patriots is now considered racist and xenophobic even by the president of the United States. “Whig history” has been replaced by “Woke history.”

Are We in the Twilight of Nations?

Severing people from the bonds of tradition threatens to destroy our social capital and usher in the twilight of free nations.

Over the past century, in Great Britain and the United States, leaders such as Winston Churchill, Margaret Thatcher, Ronald Reagan, and Donald Trump occasionally restored our forbidden sense of national pride. Churchill wrote his own Whig “History of the English-Speaking Peoples,” and a brilliant 20th-century sequel was produced by English historian Andrew Roberts. But unless things change, it’s highly unlikely that books celebrating the achievements of liberal democratic nations will ever be read again by Anglo-American students of history.

In his 2018 book “The Virtue of Nationalism,” Israeli scholar Yoram Hazony pointed out the universal value of nationhood. He argued that a world made up of independent nations leaves room for diverse forms of self-government, religious practice, and cultural experimentation that stand to benefit all of mankind.

Whig forms of nationalism have produced independence, self-determination, political sovereignty, and equal justice for all. Whig principles ultimately freed enslaved peoples in independent nations throughout the world. Giving up on the Whig legacy and the lessons of history is tantamount to giving up on ourselves.

Some have cynically claimed that history is nothing more than “a set of lies agreed upon.” But enduring nations have always required a shared narrative to celebrate and build on. Otherwise, they’ve descended into fractious collections of selfish tribal interests and eventually succumbed to the power of a predatory empire.

In the 21st century, that may well be what Beijing is counting on.