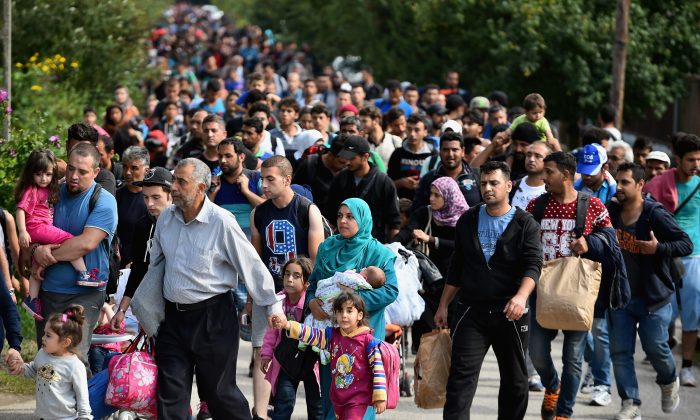 Hundreds of migrants arrive off a train from Roszke, at Hegyshalom Railway Station on the Austrian border, after Hungarian authorities closed the open railway track crossing in Hegyeshalom, Hungary, on Sept. 15, 2015. (Jeff J. Mitchell/Getty Images)
Opinion

The End of Western Europe?

The current influx of asylum seekers, refugees, and economic migrants into Western Europe presents a profound challenge to the European Union’s values, solidarity, and capacity to simply manage and accommodate such a rapid inflow of people.

True, other countries and poorer regions have taken in more refugees. But Europe’s leaders will surely want the new arrivals to be fed, housed, educated, and ultimately integrated into European society in a manner that is similar to the indigenous population.

The experiences of countries such as France and Britain demonstrate just how difficult this process could be. Integrating large numbers of immigrants with different cultural values and capacities into an existent social order requires an immense, long-term effort and commitment of resources. Unfortunately, Sweden’s experience illustrates how even the most admirable of intentions can lead to the inadvertent creation of ghettos and an absence of social cohesion or common values.

Integrating large numbers of immigrants with different cultural values and capacities into an existent social order requires an immense, long-term effort and commitment of resources.

When the values in question are pluralism, tolerance, emancipation, equality, and freedom of expression, then this can hardly be regarded as a cause for celebration. And yet, in the crisis-driven political circumstances that are rapidly redefining European politics, such fundamental questions are not likely to be on the policy agenda. On the contrary, in the current atmosphere simply managing from one day to the next seems to be the height of Europe’s collective ambitions.

Paradoxically, an absence of leadership is not the principal failure in the current crisis. Angela Merkel has acted uncharacteristically rapidly and decisively to offer asylum to nearly 1 million refugees a year. She has tried to badger and shame her European counterparts into doing something similar.

And yet no matter how noble and well-intentioned Merkel’s response may have been, it is far from clear that other leaders will follow suit, or that all Germans are equally enthusiastic about opening their borders—much less their homes—to the new arrivals.

Questioning the wisdom or sustainability of a policy of open borders is not necessarily either racist or heartless. No doubt something must be done, but it is far from clear that allowing hundreds of thousands, perhaps millions, perhaps tens of millions of people to move where they wish is practically or—even more importantly, perhaps—politically feasible.

Questioning the wisdom or sustainability of a policy of open borders is not necessarily either racist or heartless.

If Germany really commits to accepting 1 million refugees a year it will rapidly make Germany a very different country. It is difficult to imagine that this will be seamlessly accepted there or in any other country, for that matter.

No doubt some will argue that this is a unique set of circumstances and the West has a collective moral responsibility to take in Syrians, Iraqis, and Afghanis who are the innocent victims of the West’s misguided interventions (or noninterventions) in Middle Eastern politics. Perhaps so, but why would this logic not also apply to other historical victims of Western imperialism in Africa and elsewhere?

Why shouldn’t anyone who is a victim of oppression or insecurity have the right to move to Europe or other Western countries like Australia where they have at least the prospect of a better, more secure life? At the level of universal human rights perhaps they do. Simple demography suggests that such rights are likely to prove impossible to realize or—more worryingly for those in the West, perhaps—actually sustain.

A recently released report from the United Nations pointed out that before the world’s population starts to decline it is likely to increase to more than 11 billion by 2100, and by more than 1 billion over the next 15 years alone.

Most of this population growth will occur in Africa. The populations of Angola, Burundi, Democratic Republic of Congo, Malawi, Mali, Niger, Somalia, Uganda, United Republic of Tanzania, and Zambia are projected to increase at least five-fold by 2100.

These are already some of the poorest, most badly run, unstable, and insecure places on the planet. No doubt some of their problems can be traced to the impact of colonialism and the predations of multinational capitalism. But whether we attribute state failure and a lack of economic development to local or Western elites, the net effect is the same: moving to an oasis of political and social stability that is underpinned by high living standards looks like an attractive, perhaps an irresistible, option.

The relative attractions of Europe are only likely to increase over time as the governments of impoverished nations struggle to provide jobs for rapidly expanding populations with equally rapidly rising expectations. In the global village, everyone knows who the poor relations are and where the grass is quite literally greener: a degraded natural environment is likely to provide another powerful “push” factor to add to Europe’s economic allure.

When seen from the perspective of the Anthropocene perhaps this is just the way the world works. Migration has, after all, been one of the big drivers of human development for millennia. Political boundaries are a fairly recent construct and perhaps they really shouldn’t determine where human beings can and cannot go.

Certainly this is the sort of abstract argument that is made by some contemporary political theorists. I’m not sure such claims will provide much of a guide for navigating our collective way through the immediate future, however. I’m equally unsure that Western Europe as we now know it will survive the experience.

Given the EU’s inability to come up with an effective response to the crisis we may get to see what a policy of open borders actually looks like in practice. It may not be a pleasant sight.

Mark Beeson is a professor of international politics at the University of Western Australia. This article was previously published on TheConversation.com