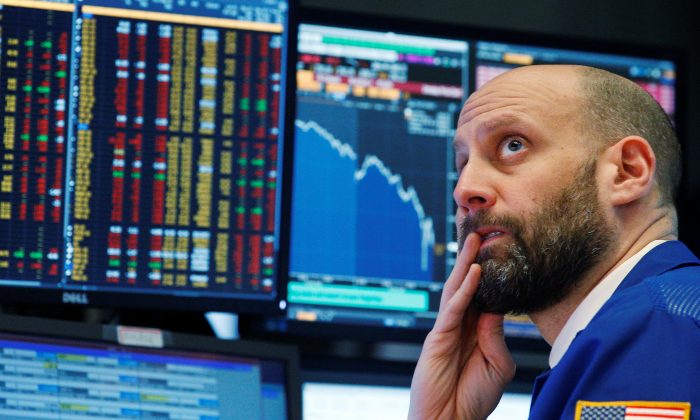 A trader on the floor of the New York Stock Exchange in New York, U.S., Feb. 5, 2018. Many signs are pointing to an end of economic expansion. (Reuters/Brendan McDermid)
Viewpoints

The End of This Economic Cycle?

Many indicators are pointing toward an end of expansion

Typical economic cycles last about seven years. Since the 2008 financial crisis, we have seen continuous growth in the global economy. The International Monetary Fund (IMF) even forecasts global growth of 3.9 percent for this year and next. We would like to believe that these are realistic predictions and not wishful thinking, but economic forecasts like these are mostly wrong, especially at turning points.

The issue is whether the recovery and the expected growth have a robust, sustainable basis, or are built on quicksand.

The growth in recent years has been largely driven by consumption. Unfortunately, this was, to a non-negligible extent, due to abundant consumer and housing credit based on cheap money, provided by the central banks in nearly all major economies. At the same time, most governments did not take the opportunity to reduce their deficits—as Keynes would have you believe—but continued high levels of spending and increased their countries’ debt.

All major central banks arrived at the limit of their ability to reduce interest rates (being already near zero or below) and have planned or have started a tightening cycle. The U.S. Federal Reserve has already started, while the European Central Bank (ECB) announced that its bond-buying program would end in September. Believing in the magic that some 2 percent inflation enhances growth, the officials at the ECB have concluded that this goal has finally been reached, so they can also slowly increase interest rates.

However, there are two problems: First, even if we believe in the 2 percent magic, this figure is mainly driven by an increase of 8 percent in energy prices and some 3 percent in food prices. Significantly, core inflation, which is supposed to depict the productive economy, rose by just 1 percent.

But what really aggravates the situation is this: an economy that grows mainly due to abundant, cheap money is a bit like a drug addict. It cannot function without additional money supply—it always needs more, or else it collapses, which it eventually will anyway, just a bit further out in the future.

So the world is arriving at the possible end of a growth cycle fuelled by cheap money, while households and governments have not just empty pockets, but also a high debt burden. At the same time, the central banks have used up all their ammunition. The necessary and overdue increase in interest rates will be disastrous for budgets, both public and private.

The history of the last quarter-century’s fiscal and monetary policies mainly consists of treating symptoms, and less so the underlying causes of economic imbalances. If we look at the world’s financial mechanisms, we can see that they are built to avoid situations that can trigger a crisis, but lack the courage to implement real corrective measures.

These could be painful and would expose fundamental weaknesses that are less due to market conditions than to significant political “manipulation” of the economy. Some of the main problems have been populist overspending, too much government involvement in the economy, and excessive intervention in markets and business.

The recent increase in oil prices could be a real threat to growth. The rise might have initially been welcomed as boosting inflation, a sign expected by central bankers, but the increase in energy costs eventually harms growth. OPEC was aware of this phenomenon and decided to increase output to stabilize prices. The White House also strongly urged the Saudis to follow through with the plan.

For a long time, a big problem has been protectionism. The public was not too aware of this issue until President Donald Trump, in his usual very direct way, started to retaliate against unfair practices by a number of U.S. trade partners, especially China.
However, even Western blocs, including the United States and even more so the European Union, are not innocent. Protectionist policies have not only used tariffs as political tools, but also introduced quotas, regulatory barriers, product specifications, foreign-exchange policies, subsidies and investment restrictions. They put up layers of bureaucratic red tape and numerous other obstacles.
The United States’ current retaliation has certainly not created the problem, but it could trigger a crisis.

Rising energy prices, trade restrictions, and slowing growth in certain countries (especially China) are adverse indicators for the world economy. The staggering debt of both governments and households allows little margin for additional consumption. Due to quantitative easing and low interest rates, central banks will not have room to head off a strong recession. We have to recognize that central banks’ balance sheets are overextended.

Political misjudgments and crises are adding to the problem. We need not panic, but it is time to make a cautious, critical assessment and not be misguided by false hope. It is time that the real causes be treated and not just the symptoms.