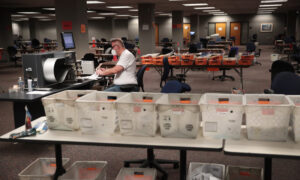 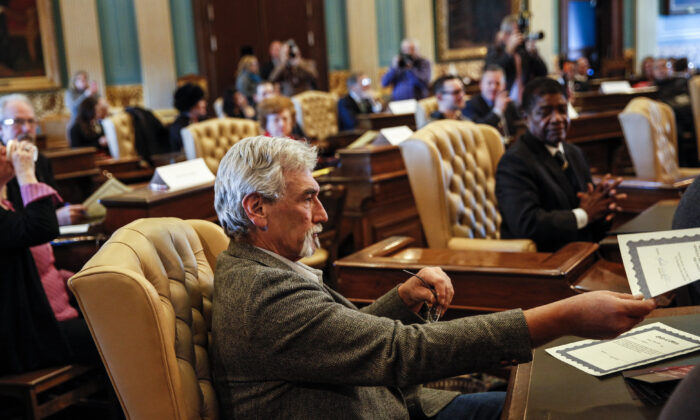 Robert Weitt, a Michigan representative to the electoral college, hands in his signed vote for President-elect Donald Trump at the Michigan State Capitol in Lansing, Mich., on Dec. 19, 2016. (Sarah Rice/Getty Images)
Viewpoints

The left wants a national popular vote at all costs because they believe it will guarantee them consistent presidential victories. A careful student, however, understands why the Electoral College came into being and its importance.

At the time of our founding, Virginia was by far the largest nation state among the Confederation of the former 13 colonies governed by the Articles of Confederation. The smaller states, such as Delaware and Rhode Island, well knew that any new compact that was based solely on the popular vote would mean that the large states would rule the nation.

Independent-minded Rhode Island was so unwilling to go along with the idea of a larger and more powerful federal government, let alone one dominated by the large states, that it refused to send any delegates to the Constitutional Convention.

In the end, Rhode Island was bullied into joining the United States with the new Constitution by threats of economic ramifications if it didn’t join the new union. Before it got to that point, the small states obtained concessions that they believed put them on more equal footing with the large states.

Those concessions included two U.S. senators from each state and the Electoral College. The Senate was a buffer against the large state domination in the House of Representatives, and equal representation for all states in the Senate was key. The Electoral College put a similar brake on the excesses of democracy that even the Founders feared was occurring in the states.

Without those concessions, there wouldn’t have been United States in that space and time.

Keep in mind, the large states made the deal because they knew a united set of colonies would benefit them as well. First, it quelled the possibility of civil war. George Washington believed that if the Constitution wasn’t accepted by the states, the next constitution would be “drawn in blood,” while Noah Webster and Alexander Hamilton warned of civil war.

Second, a united set of colonies would be safer against invasion and stronger in international affairs, and that included international trade and trade between the colonies. In plain terms, the large states believed their possibilities of “life, liberty and pursuit of happiness” were greater under the Constitution, a Senate and the Electoral College. In other words, the large states had foresight.

Instead of civil war, the combination of the Constitution and President George Washington created a lasting nation. What followed was orderly growth, trade instead of trade wars, and unparalleled prosperity that no nation in history has even remotely rivaled.

Even so, we know our Union was more than tested. The South, so fearful of and opposed to control by the North on the issue of slavery and more, seceded from the Union. Their argument was that the Union was voluntary and that they had a right to secede over a dispute as to who should be able to decide policy for whom. We know the result of that conflict.

Today, we live in what I call “The Divided Era.” Yes, we’re divided philosophically—but we’ve always been divided that way.

According to the legendary Chief Justice John Marshall in his five-volume work “The Life of George Washington,” first published in 1804, “At length, two great parties were formed in every state, which were distinctly marked, and which pursued distinct objects, with systematic arrangement.”

Marshall describes them as follows:

“The one struggled with unabated zeal for the exact observance of public and private engagements. … The distresses of individuals were, they thought, to be alleviated only by industry and frugality, not by a relaxation of the laws, or by a sacrifice of the rights of others. … The other party marked out for themselves a more indulgent course. … Viewing with extreme tenderness the case of the debtor, their efforts were unceasingly directed to his relief. To exact a faithful compliance with contracts was, in their opinion, a harsh measure. … which the people would not bear.”

We’re aligned that same way today, with one significant difference.

Today, our differences are played out along the lines of our no longer limited governments which, all combined, are spending nearly the equivalent of 50 percent of our economy. At the time Marshall wrote of our earlier party differences, our governments spent just 2 to 3 percent of the economy.

It’s one thing to theoretically disagree over policy or minimal spending. Today, a central reason we fight so much is because there’s a desperate desire to control $10 trillion in government spending, to get that spending and to tax someone for that spending. With every new dollar spent and taxed, our divisions grow.

Incredibly, the American left wants to dramatically increase that spending. It wants the government to impose government health care and even reparations, not to mention deciding what energy is allowed to be used, along with the extent of gun rights, and so much more.

Unlike any time before, that fight over control of our governments is spilling into the streets—all across the nation. If the Electoral College was abolished tomorrow, those divisions would reach a breaking point.

Our red state/blue state divide is reaching proportions reminiscent of our pre-civil war era Mason-Dixon line. Without the Electoral College, the small red states, not to mention Texas and Florida, would have little interest in staying in a union perennially run by California, New York, Nancy Pelosi, Kamala Harris, and Andrew Cuomo.

If, under the left’s plans, as spending sky-rocketed, schools adopted San Francisco norms, gun rights were eviscerated, and green new deals became the only deal because the leaders on the left didn’t value small states and a unified country, we would find law-abiding red-state citizens wanting to leave the union and letting the left pay for their own failures.

Secession movements are real. They exist in democracies such as in Venice, Italy, and Alberta, Canada, against their governments. They exist against and among those in California and Oregon who want a separate state of Jefferson. Sentiments exist in Texas as well.

The more the Electoral College is threatened, the more of that you will see in America. The question today, and always, is whether our leaders have more foresight than personal ambition and whether the large states understand that it isn’t their role to rule.