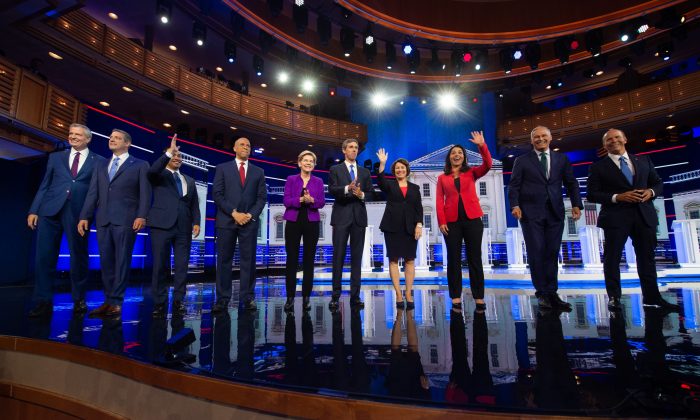 Of all the Democratic presidential candidates, they alone oppose providing government-funded health care to illegal immigrants. They also stand virtually no chance of winning the Democratic primary election.

There’s plenty of space in which to disagree on issues. The problem is that Democratic candidates aren’t using that space at all. With only a few rather insignificant exceptions, they’re all huddled together in the furthest left corner of the stage.

Democratic leaders supported policies quite recently that the party as a whole won’t tolerate today. The Washington Post described this shift as “Obama without Obama-ism.” The New York Post declared, “Forget the Democratic Party of Bill Clinton: The party of Barack Obama is dead, taken over by the historically discredited mantra of socialism.”

The pressure on the Democratic presidential candidates to conform to policy positions that are extreme, relative to the consensus of the recent past, is alarming. Especially disturbing, though, is the political posture of refusing to exercise prudence in regard to difficult political questions. Instead, the party has largely surrendered to the dictates of ideological thinking, come what may.

Prudence is a rare virtue. Neither political party has a monopoly on it.

Aristotle described prudence as the preeminent virtue of the statesman, the most important quality one should look for in a political leader. Prudence is a kind of practical judgment, but it means much more than mere cunning.

In this sense, Marianne Williamson was not entirely crazy when she said in the last debate: “If you think we beat Donald Trump by just having all these plans, you’ve got another thing coming. Because he didn’t win by saying he had a plan. He won by simply saying, ‘Make America Great Again.’”

Indeed, Trump has kept his focus on a desire to see the whole country flourish, not just the coasts and cities. And that forgotten middle won him the White House in 2016. Meanwhile, Democrats keep doubling-down on identity politics, ever inventing new reasons to dice and divide Americans into subgroups.

The prudent statesman always bears in mind the end of human flourishing, but he also keeps his attention on the prevailing circumstances. He exercises prudence to bring about as much flourishing as he can given those circumstances.

Not so the ideologue. He’s the devotee of an overarching idea, circumstances be damned. An ideology is an attempt to reduce all of the complex questions in political life to a simple theory.

The hardened libertarian, for example, doesn’t consider circumstances on the question of free trade: Free trade is always the right policy. So also with the ardent socialist: Economies must always be planned.

Ideology is thus a flight from prudential thinking. It’s a refusal to acknowledge that circumstances are always changing and must be taken into account.

The Democratic Party in general, and the 2020 presidential candidates in particular, have been drifting away from prudence toward ideology in several revealing ways. Consider, for example, their stances on immigration, abortion, and universal health care.

On the first night of the Democratic debate, Julián Castro challenged Beto O’Rourke and the whole party to make illegal immigration a civil, not a criminal, offense. Illegal immigration, in other words, isn’t really an offense against American sovereignty but merely an offense against our sensibility and preference for order, like a parking violation.

In truth, this position is basically a policy of open borders. It doesn’t countenance the rights of Americans nor does it allow for circumstances ever to justify questioning the right that immigrants have to enter our country. Open borders is a moral necessity.

Likewise, abortion is no longer talked about as a lamentable resort permitted in certain circumstances only. Increasingly, the Democratic Party is defining itself as the unlimited, pro-abortion party.

Note the pressure that the party brought to bear on Joe Biden for holding what he called a “middle-of-the-road” stance before he capitulated and vowed to support revoking the Hyde amendment, which prohibits the use of tax dollars to support abortion. Further, Democratic-controlled state legislatures have been passing laws making abortion legal, sometimes all the way up to the point of birth. Though an irony in terms, one now hears that “abortion is health care.”

Although Democrats would retort that Republican legislatures are passing equally extreme laws to limit abortion, the former refuse to acknowledge new circumstances, such as the advances in medical science that increasingly improve the viability of a fetus. They follow the dictates of the ideology that a woman’s “right to choose” must never be questioned in any circumstances.

Finally, health care is also an issue that no longer requires hard thinking. The loudest voices in the Democratic Party now proclaim that “Medicare for All” is a moral requirement. The only disagreement seems to be about whether people should still be allowed to keep their private insurance.

Like with immigration and abortion, there’s nothing else to consider with health care; it must be offered in full to everyone. Should the populations of the whole world climb over our border, they would have a right to health care, and American citizens would have an unquestioning duty to provide it.

Two effects will likely follow this drift away from prudence toward ideology in the Democratic Party, the least of which is that it will likely lose them the 2020 election.

James Madison wrote that the first “aim of every political constitution is, or ought to be … to obtain for rulers men who possess most wisdom to discern, and most virtue to pursue, the common good of the society.”

The further that Democratic presidential candidates continue down the road toward ideology and away from prudence, the further they’ll push the political conversation as a whole away from an honest consideration of the common good.