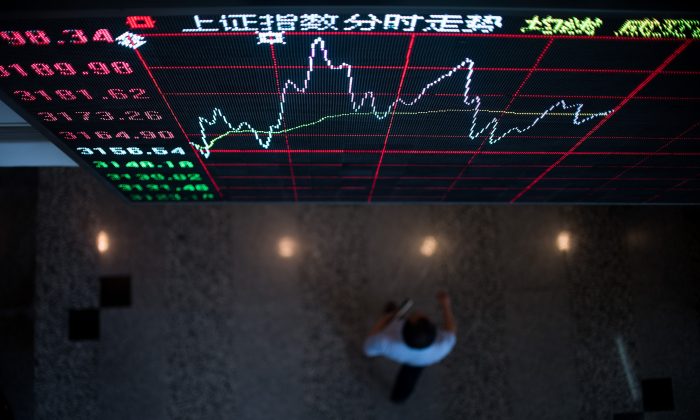 A board shows the stock movements inside the Shanghai Stock Exchange in the Lujiazui Financial district of Shanghai on Sept. 22, 2015. (Johannes Eisele/AFP/Getty Images)
Business & Markets

The End of Outflows? China’s Reserves Rise in October

After a pretty rough ride in the summer, China is staging a comeback in the fall.

Just as the International Monetary Fund is about to decide whether to include China in the world’s reserve currency basket, the stock market is rallying, up 15 percent over the past months.

Large swings in China’s stock market are pretty common, but there is another indicator that has turned around: foreign exchange reserves.

They rose by $11.4 billion in October. The market expected outflows in the range of $50 billion, similar to the drain plaguing China for over a year.

The depletion of China’s massive pile of reserves ($4 trillion at the peak in 2014) means capital is leaving the country, and has been for a while. Now the sudden and unexpected change.

Does this mean the trend of capital flight has reversed for good? Most likely the answer is no for several reasons.

First, nobody really knows what’s included in China’s $3.5 trillion piggy bank. If the market value of the portfolio appreciates by only 1 percent for example, FX reserves rise by $35 billion without anybody moving a finger.

Goldman Sachs says: “Besides currency movements, there could also be significant valuation effects from changes to the market prices of the People’s Bank of China’s investment portfolios, and those effects are hard to estimate given the uncertain asset composition.”

In addition, China is hiding outflows with derivative transactions through state-owned banks, which may only register at a later date.

For example, factoring in banks’ derivative positions, China’s foreign exchange reserves dropped by $110 billion in September compared to official figures of $43 billion, according to Goldman.

Nomura found movements in the currency markets support the argument that China was still intervening to support the yuan in October.

“Intervention was especially heavy on Oct. 30 when both onshore and offshore yuan gained substantially against the dollar. Daily volume transacted was also larger than normal on Oct. 30,” noted Nomura.

Also, foreign exchange reserves are just one element of the total movement of capital. Foreign money is still moving into China through trade (roughly $61.6 billion in October) and other channels, but the largest portion of it flows straight out again.

So despite the small break in October, Nomura believes outflows will continue in the medium term: “We see some risk of increased capital outflows from locals as well as increased investment outflows especially as China’s capital account liberalization continues.”