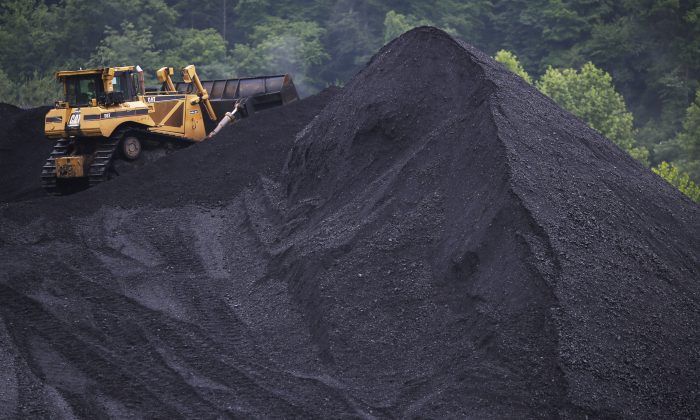 A bulldozer operates atop a coal mound at the CCI Energy Slones Branch Terminal in Shelbiana, Ky., on June 3, 2014. (Luke Sharrett/Getty Images)
Environment

Scotland has become the first part of the U.K. to stop burning coal to supply electricity following the closure of Longannet, its largest power station, on March 24. It is a sign of the times, with the rest of the U.K.’s coal-fired power stations on death row after energy secretary Amber Rudd announced late last year that they will all be forced to close by 2025.

For many reasons, it is hard to mourn the demise of coal-fired power. Around 12,000 miners are killed around the world each year, most of them digging for coal; abandoned mines cause widespread water pollution; and coal-fired plants pollute the air with the likes of nitrogen and sulfur compounds, as well as the highest greenhouse-gas emissions of any major source of energy generation. In the absence of carbon capture and storage, a technology which would be ready more quickly if the government backed it properly, plant closure may therefore seem sensible—even while we should help those that lose their jobs and regret the loss of skills from the workforce.

That would be all there was to say were it not for a few harsh realities of electricity supply. There are two reasons why coal-fired power plants have survived so long. Coal is cheap; only since the U.S. shale-gas boom has it been consistently beaten on price. And coal-fired plants are particularly suited to providing power on demand at short notice, as well as providing crucial stabilization services for frequency and voltage across the grid.

If we are unable to dispatch electricity on demand, we must expect blackouts. To do away with coal-fired power before alternatives are available is bold, to say the least. Gas-fired plants can play the same role, of course, but we have not been building them in the U.K. in recent decades. And the economics for doing so have been made very difficult by the capacity-auctions system that helps to fund them, which has also seen many existing plants mothballed.

As for nuclear power, it is low-carbon but provides electricity at a constant rate and therefore can’t be increased to track demand. Besides, the ongoing fiasco over Hinkley C—and by extension nuclear new-build in general—hardly makes it look a great contributor to energy security in the foreseeable future.

Among the renewable sources, the only one that offers equivalent dispatchable power is biomass combustion—burning mainly wood—but it also entails air-quality challenges and its sustainability is debatable. Hydropower is seasonally limited, while wind and solar are incapable of dispatchable output. The consequences are not just for the future, either—to compensate for the reduced coal-fired and gas-fired power, National Grid has been quietly allowing energy companies to set up “diesel farms” of temporary generators in England to provide extra power in peak, even though it’s more damaging than coal.

But can’t we just store renewable energy, whenever it is generated, and dispatch it at times of high demand? Let’s be clear: we have the technology—it’s the affordability and scale that are challenging. Of the myriad potential storage technologies, none are as yet close to being able to store electricity at comparable scale and cost to our only grid-level storage technology: pumped-storage hydropower.

But pumped storage can only do so much. Let’s assume the U.K. could muster sufficient wind power to meet one third of our typical daily electricity consumption (40 GW to 45 GW). In the absence of dispatchable power on demand, to offset the kind of three-day calm period that is common during spells of high pressure in winter, we would need to be able to store around 1,000 gigawatt hours (GWh) of power. Yet pumped storage hydropower in the U.K. only totals 30 GWh, from four stations.

If we are going to manage without Longannet and all the other gas-fired and coal-fired power stations, we would need at least 970 GWh of storage—more than a hundred pumped hydropower stations of comparable size to those we already have. This would be unlikely to cost less than 100 billion pounds ($141.3 billion). And do we even have 100 plus upland catchments we’d be happy to impound and manage for this purpose? Even if most of the U.K. uplands were not (rightly) zealously protected conservation areas, it seems implausible that the U.K. could find sufficient sites.

Add the important caveat that you lose energy sending it back and forth to a storage facility, between 10 percent and 35 percent depending on the technology. This means that relying on renewables and increased storage means you would need substantially more total generating capacity than at present.

So far we have only talked about power quantity, whereas power quality is also crucial. To keep voltage within prescribed bounds requires “reactive” (or “wattless”) power. Coal-fired power-stations have long been the mainstay of this activity—not least in Scotland. It has to be done regionally, so you can’t make up for this with coal power from elsewhere. Wind turbines cannot provide reactive power control, and neither can nuclear. Gas-fired power is again the only alternative.

So as we close plants such as Longannet, we can expect serious problems with voltage control. This bodes ill for the electrical appliances and devices on which we all increasingly rely. With the closure of Longannet, Scotland thus becomes the first area of the U.K. to take a serious gamble with reactive power. It will take not just good management but a serious amount of good luck for the fossil-fuel funeral wake not to be spoiled by flickering or failure of the lights.

In short, we may be heading into dangerous territory. The U.K. needs to get a strategy together for building new gas-fired or coal-fired power, fitted with carbon capture and storage technology, before the situation deteriorates any further.

Paul Younger is a professor of energy engineering at the University of Glasgow in the U.K. This article was originally published on The Conversation.