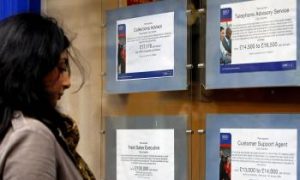 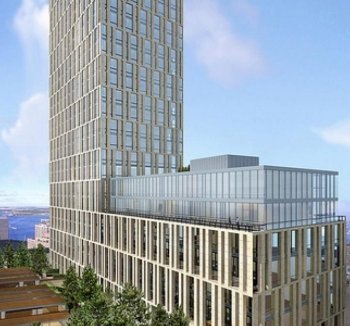 TRIBECA'S MOST ADMIRED: The building, designed by Skidmore, Owings and Merrill, is wrapped in a recurring pattern of Jura stone, which envelops large glass windows and allows residents skyscraping views. (Courtesy of Corcoran Sunshine Marketing Group)
US

By Adam Miller
Print
At the southern tip of Manhattan, on the rooftop of 101 Warren Street, lives a pine forest.

The building, designed by Skidmore, Owings and Merrill, is wrapped in a recurring pattern of Jura stone, which envelops large glass windows and allows residents skyscraping views.

But what makes this project special is that residents can admire from above, or access directly from terraces and loggias, the 101 Austrian pines living atop the building’s retail square. The pines are set in “mounded ellipse-shaped forms” and rise from beds of river stone.

According to Thomas Balsley, principle designer of the forest-terrace, “this singular expression on a roof is truly unique to New York which added appeal to the marketing effort.”

And it appears the marketing worked: in August of 2010, the Corcoran Sunshine Marketing Group announced in a press release the total sellout of 101 Warren Street. The release states, “At total sales of over $650 million dollars, the sellout is by far the largest and most successful condominium offering in the history of downtown Manhattan.”

No doubt, this is an impressive feat, particularly during the economic downturn and the fallout in the real estate market. But how much of the appeal at 101 Warren Street can be linked to its elevated forest landscape? After all, there are other unique features there that draw people in.

For example, the building houses high profile artwork, such as an original tapestry in the lobby by American Pop artist, Roy Lichtenstein, and an original Joel Shapiro sculpture in front of the lobby.

But, while it is true, Lichtenstein and Shapiro’s works are notable and worth viewing, they can also be found throughout the city, in places such as the Museum of Modern Art and Whitney Museum of American Art, among others.
Truth is, there is only one rooftop pine forest in New York City.

And the forest—like a famous work of art—has earned its own accolades, such as full page ads on the inside cover of the NY Times Magazine that simply state: “The Pine Forest by Thomas Balsley.”

On the value and appeal of the forest, Balsley says, “Based on the owner, and broker reports, we know it adds value. How much is impossible to measure. People who live there take pride in their ‘forest’ in ways that make cut boxes with flowers seem pedestrian.”

Perhaps Willa Cather, Pulitzer Prize winning author, had it figured out when she wrote in My Antonia, “Trees were so rare in that country, and they had to make such a hard fight to grow, that we used to feel anxious about them, and visit them as if they were persons. It must have been the scarcity of detail in that tawny landscape that made detail so precious.”

While NYC certainly is not “tawny” or lacking detail, an urban dwellers’ inner-nature-lover must certainly pop when—in the heart of the big city—it discovers a roof of pines and river stone.

It is the economic principle of scarcity that proves the forest-floor at 101 Warren attracts. Upon closer analysis, this elevated forest cannot only be found at just one location in the city, but the Corcoran Sunshine release points out, it is “thought to be the only one of its kind in the world.”