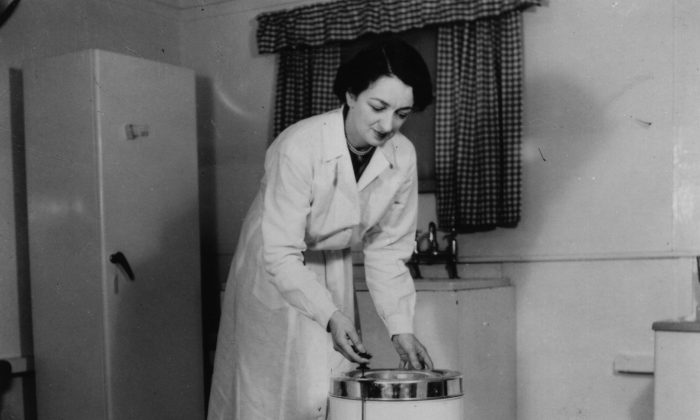 A housewife uses her new spin dryer in 1955 - around the time that Sydney and Rachel Saunders also purchased their appliances. (Hulton Archive/Getty Images)
UK

They bought their appliances more than 50 years ago, but now they must go.

Rachel and Sydney Saunders, 81 and 83, are upgrading their cooker, washing machine, and tumble dryer after more than half a century of service.

The elderly British couple are hoping the appliances, which are still in good working order, will go to a museum or a home where they’ll be appreciated.

Sydney said: “Things were made better in those days, they were more durable and stronger, but of course the new ones are more sophisticated.

“That’s a good thing, but it means that if something goes wrong it can be quite a big job. I think a lot more care was taken in older days,” he said, reported The Sun.

The appliances include a 54-year-old Burco tumble dryer, a 62-year-old Servis washing machine, and a Baby Belling cooker purchased in 1956 for £19. Plus a pair of irons given to them as a wedding present 62 years ago.

Rachel told the Sun: “We were given the washing machine when we were married—62 years ago—and the last time it was used was 12 years ago.

“I’ve used it every week ever since up to a couple of months ago.

“It’s still in working order and all you have to do is put the clothes in and switch it on.

“It’s quite simple—just place the clothes forwards and backwards and then put it through the rollers.

“The last time the cooker was used was 28 years ago and it was working fine then.”

After clearing out their home in Exeter, southwest England, they have decided to sell the appliances and feel it’s a shame for them to go to waste.

Rachel said: “It would be such a shame for them just to go to landfill so we’d really like someone who is interested in them to come forward.

“You just don’t get appliances made like that today.

“We don’t know what they’re worth, but the money isn’t important, we just want them to go to a good home.

“We’ve been here for 60 years and we’ve kept them for spares for years, but now we’ll never use them again and it’s time we found a good home for them.

“I’m not bothered about the price, I’d like them to go to a museum or something like that so they can be preserved.”