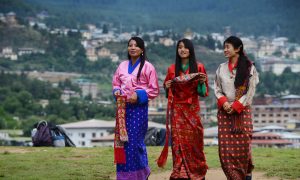 The Economy Is Good but Not 5% Good

Jason Stipp: I’m Jason Stipp for Morningstar. The third read on third-quarter GDP showed that the economy grew 5% in the third quarter. This is a lot better than many folks were expecting. So, should we pop open some New Year’s champagne a little early? Morningstar’s Bob Johnson, our director of economic analysis, is here to give us his take on that, as well as some other data this week.

Bob, thanks for joining me.

Stipp: That 5% was really good. I think the read before it was 3.9%. There was a big improvement there. What was driving that revision?

Johnson: Almost all of the revision related to the consumption category, and services in particular, which is really great news for the economy. I talk again and again about the consumer being 70% of the U.S. economy, and as they spend, business has to follow suit. So, we love it when the adjustments are based on bigger consumer spending; we’re not so happy when it’s inventory based. So this was clearly a really nice surprise.

Stipp: The question then is, is this consumption part of the economy sustainable? Do you expect that consumers will continue to spend?

Johnson: Consumption has been running about 2% to 2.5% for some time, and we had a couple of bad months earlier in the year–there was some weather-related stuff. Over the summer, consumers panicked a little bit when food prices, specifically beef, went up so much and all the droughts were starting to weigh on lot of food prices. That has backed into the background, and I think consumers have come back with a vengeance now.

Stipp: We saw consumers saving a little bit more earlier in the year, and then some revisions showed they saved a little less, but now they are maybe spending some of those savings?

Johnson: Yes. In the third quarter data that we saw today in the revisions, it was certainly consumption related. And also today, we saw some consumption data for the single month of November that eventually will roll into the fourth-quarter GDP number, and it showed some really great growth–0.7%. When adjusted, and I’m saying this right, for deflation, it was up 0.7%, which is a great consumption number, and it seems to indicate that consumers are reacting to the lower gasoline prices.

Stipp: Consumers are doing OK, but this 5% GDP is not going to be sustainable, and you don’t expect to see a number nearly as high in the fourth quarter?

Johnson: I do not, and I may be a little bit unusual there. I’m thinking that it will be 3% or less in the fourth quarter. I think the consumer will continue to do well and will be a big part of the number, but in the third quarter, we had a perfect storm of good news for GDP:

Government, which had been down many quarters of the last three years actually made a halfway-decent pop, and I think that may reverse itself in the December quarter.

We had the highly unusual situation in the third quarter, where we’re in the middle of almost an economic boom, if you will, in the U.S. in the short run, and yet imports aren’t growing nearly as fast as exports, and the rest of the world is having slowing growth. That just isn’t sustainable; it doesn’t make sense. That added 0.4% to GDP, and that’s probably going to go the other way in the fourth quarter.

Business investment was not a wonderful number. It was a little bit better in this report, but I think that’s going to slow down again in the fourth quarter as well.

Stipp: This 5% came as a result of several factors that aligned in the third quarter. What do you think the actual GDP is if you were going to average several quarters together or forecast a GDP growth rate into the future?

Johnson: Well, the last three years, we’ve been at 2% to 2.5%, in fact about 2.3%. I don’t see us very much different from that. My forecast says 2% to 2.5%. Clearly with some of the recent data, we are probably a little bit closer to the 2.5%. But there are certainly a lot of people out there, most people, are talking about 3% and some are even talking more than that for next year. But for the reasons we talked about, it will be good, but not as good as 4%.

Stipp: So don’t get depressed when you see GDP coming down from this 5% number in the fourth quarter and potentially then on into next year.

Let’s talk about some other data that we got this week that didn’t look as good as this GDP revision. New home sales, existing home sales, you called them “disastrous”? Were they really that bad? What’s going on with that?

Johnson: They weren’t disastrous, but they were down. We always like things up and to the right, and we’ve just had several months where the housing sector can’t get out of its own way, which is highly unusual for a recovery. We usually see housing begin to kick in here. In fact, it’s usually what leads us out of a recession and what sustains us, what lasts the longest. But it’s certainly not happening this time around.

Stipp: Why are we stuck in the mud with housing? What are the factors holding it back when you would expect it to be doing better?

Johnson: There are a few things going on. High student loan balances are certainly one of them, and the defaults on those loans have hurt young families. Going through the recession, a number of people got their credit record pretty smashed up, and those are people who would typically be first-time buyers right now, and that’s not good news. We have interrupted that chain where the first-time buyer buys from the guy who already owns a home, and then he can afford to buy the next-level home, and we’ve wrecked that chain a little bit here.

I’m optimistic that we’ll get better in housing. It’s only 3% of GDP currently; it averages 5%. It’s been as high as 7%. So there is room to improve there, but right now, this time of year, we’ve got the calendar working against us. People would rather be doing their holiday shopping. The weather, people don’t want to get out and look around for housing. If we see another nice uplift in housing, which I do expect, it’s probably going to be in the spring months.

Stipp: So, don’t panic on housing. It doesn’t look that great right now. We do have some room to improve there, but probably not overnight.

Let’s look at durable goods orders data, which we also got this week, and that didn’t look very good. Manufacturing had been stronger earlier in the year, and now it’s leveling off, taking a breather.

Johnson: Yes. It’s been a great year for manufacturing, and we’ve had some great industrial production growth that’s basically double what the average is. But lately, some of the orders, the more forward-looking part of manufacturing data, including the durable goods orders data that we got today, were disappointing. Usually it’s because the airline-related purchases are screwed up, but it was just plain not a good number. And if we look at durable capital goods ex-aircraft on our three-month moving average basis, we’re actually moving into down territory three months in a row. So that’s getting a little bit worrisome, and probably some of that is export related, and due to the strong dollar, and we do ship a lot of especially our high-end goods overseas.

Stipp: But the export number was looking good for the third quarter, but probably will start to moderate, you would expect?

Johnson: Right exactly. The bigger story on the net export number was the imports. The exports were going down as a percent.

Stipp: If it looks like manufacturing is taking a bit of a breather here after being pretty strong this year, is the consumer strength that we’re seeing going to help support it ultimately, and manufacturing will be OK, in your view?

Johnson: I think manufacturing will do OK. I think you may have to be a little bit selective on what you do in manufacturing. Certainly one of the issues out there is that autos have been growing really well, and I think what has happened now is that they are doing well, but they are not growing as fast as they were–the law of large numbers. So, I don’t think automotive is going to be a big impetus for manufacturing next year.

I mentioned housing is a little soft, and that helps drive a little bit of industrial production, and with that still being stuck in a rut, I wouldn’t expect that to be a big adder. And we talked about overseas being a little weak, so there are a few issues brewing where I think manufacturing may not do quite as well. Again, nothing to panic over, but it may not be as strong as it was.

Stipp: Great insights on the data of the week, Bob. Your quarterly market outlook will be available for Morningstar readers on Monday. Thanks for joining me today.