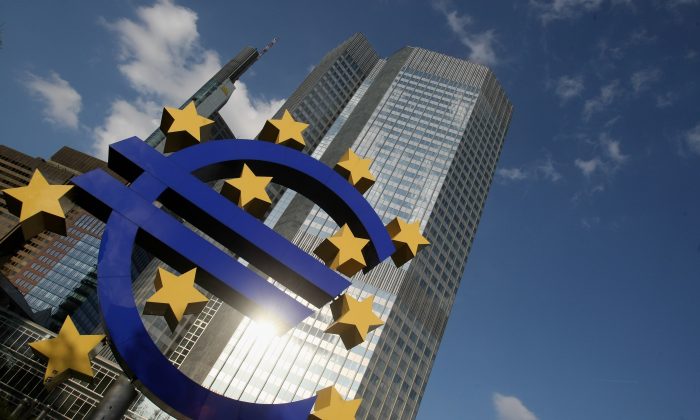 A huge euro logo stands in front of the headquarters of the European Central Bank (ECB) on April 9, 2009 in Frankfurt am Main, Germany. (Ralph Orlowski/Getty Images)
News

When it comes to printing money, the Fed has an advantage over the European Central Bank (ECB). Buy Treasurys from the government via the banks and drive up risk markets in the process. The ECB’s fancy liquidity programs are doomed to fail. The only thing they are good for are a low euro.

Here is why things are much more complicated for the ECB. It cannot buy government securities, either directly or indirectly by printing money. So the main way it can expand its balance sheet and devalue the currency is by selling monetary instruments to and from banks.

This includes loans and deposits. When the euro crisis was at its height at the end of 2011, the ECB devised a clever way—called LTRO, Long-Term Refinancing Operation—and dished out $1.3 trillion in loans to financial institutions. This extra cash eased liquidity constraints at banks and drove up risk prices. It effectively defused the crisis.

At that point, banks were desperate enough to take up the loans at a 1 percent rate while only getting 0.25 percent at the ECB’s deposit facility, where all the LTROs were parked once they flushed through the financial system. Because no government debt is monetized, the effect on the economy was minimal.

After a massive rally in risk assets, especially government bonds, banks didn’t need to engage in this losing trade anymore. LTROs are down to $545 billion and the deposit facility down to $31.3 billion. Banks don’t want to park their money at the deposit facility because it now costs them 0.2 percent to park it there. They now have it mostly parked in reserves, which pays them 0.15, so they are still losing money.

The newly offered LTROs are cheaper at 0.15 percent but would still only create a break-even for banks if they can park the balance—and the ECB’s balance sheet must always balance—as reserves. So they only got $105 billion at the first offering and gave back some of the old loans as well, a real disappointment.

The liquidity programs to buy covered bonds and asset-backed securities fall into the same category. Banks are currently making upward of 3 percent on these securities with reasonable risk. If they sell to the ECB, the ECB will make the 3 percent and the banks will get 0.15 percent for their reserves or have to pay 0.2 percent for deposits. The only upside they get is zero risk.

However, the current market is not exactly risk averse but rather strapped for yield. To put it simply, banks just aren’t as desperate as they were in 2011 and 2012.

Because of the unwind of the LTROs, the ECB’s balance sheet has shrunk from about $4 trillion at the beginning of 2012 to $2.5 trillion now. This makes it the only major central bank in the world to have shrunk its balance sheet during the last two years.

This factor—and only this factor—is responsible for the rise of the euro to $1.40 while the European economy cratered and the U.S. economy thrived, at least relatively speaking. But because there were more dollars sloshing around relative to euros (remember QE infinity?), the price for one euro had to go up.

This doesn’t bode well for European exporters, which is why ECB president Draghi now jawboned the euro down to $1.27 again, threatening another $1.3 billion expansion of the ECB’s balance sheet.

However, until he gets another crisis and banks are desperate again, he won’t succeed in pulling it off.