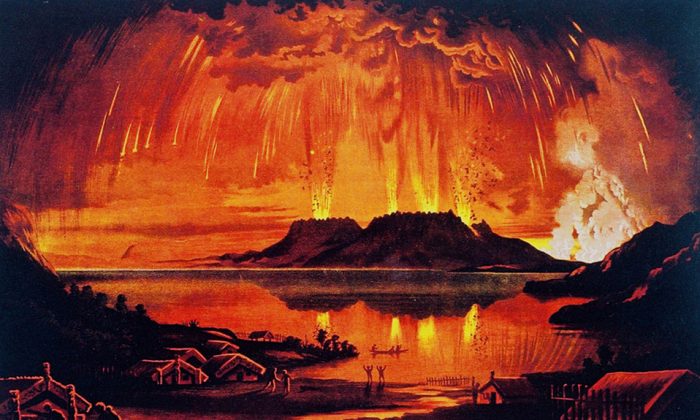 The Earth Might Be Overdue for a Cataclysmic Volcanic Eruption

Traffic is bad, the job is a drag, prices are rising, wages are stagnant—and on top of all that, a volcano might reduce Planet Earth to a “pre-civilization state,” some scientists claim, adding that such an eruption might be overdue.

Researchers at Bristol’s Schools of Earth Sciences and Mathematics in the UK estimated how often the largest explosive “super-eruptions” happen. It turns out, a lot more frequently than previously thought.

“Super-eruptions” can eject more than 1,000 gigatons of erupted mass. That amount of debris could blanket an entire continent, and change the planet’s weather for decades, with ash blocking the sun.

Plants would die, then animals. Without food most people would die. What would be left would be a Stone-Age level of civilization.

Researchers at Bristol University looked at geological data going back through 100,000 years to find signs of super-eruptions.

Their findings have overturned current thinking on super-volcano risk.

Professor Jonathan Rougier is a Professor of Statistical Science who studies “uncertainty and risk assessment for things that have the potential to cause substantial harm.” He works on the VOLCORE project, “analyzing ice and ocean cores to study global volcanism on long timescales.”

Professor Rougier told The Mirror, “The previous estimate, made in 2004, was that super-eruptions occurred on average every 45 to 714 thousand years, comfortably longer than our civilization.

“But in our paper just published, we re-estimate this range as 5.2 to 48 thousand years, with a best guess value of 17 thousand years.”

The very earliest discovered signs of permanent human settlements are villages used by mammoth hunters in the Czech Republic town of Dolní Věstonice, dated to about 23,000 B.C.

With no sign of a catastrophic eruption since then, one could assume another may be due. Or maybe not.

“On balance, we have been slightly lucky not to experience any super-eruptions since then,” he said.

“But it is important to appreciate that the absence of super-eruptions in the last 20 thousand years does not imply that one is overdue. Nature is not that regular,” he added. “What we can say is that volcanoes are more threatening to our civilization than previously thought.”

According to LiveScience, a supervolcanic eruption could have the same impact as a mile-wide asteroid, blocking the sun with ash, reflecting its rays and cooling the Earth—a phenomenon called a “volcanic winter,” similar to a “nuclear winter.” Also possible are tsunamis if the eruption is in or near an ocean, according to the Department of Geosciences at the University of Massachusetts.

There are about a dozen supervolcanoes known today, many of them under the ocean. One of the largest encompasses Yellowstone National Park.

The U.S. Geological Survey says that the Yellowstone super-volcano has erupted three times in the past 2.1 million years—the first being 2.1 million years ago, the second 1.2 million years ago, and the third 640,000 years ago. The three eruptions “were about 6,000, 700, and 2,500 times larger than the May 18, 1980, eruption of Mt. St. Helens in Washington State. Together, the three catastrophic eruptions expelled enough ash and lava to fill the Grand Canyon.”

According to USGS, these eruptions “covered much of the western half of North America, likely a third of a meter deep several hundred kilometers from Yellowstone and several centimeters thick farther away. Wind carried sulfur aerosol and the lightest ash particles around the planet and likely caused a notable decrease in temperatures around the globe.”

Not Much to Do in Any Case

Professor Rougier pointed out that while supervolcanoes could do devastating destruction, there were many more immediate issues mankind should be addressing.

“As well as improving our understanding of global volcanism, our paper develops relatively simple techniques to analyze incomplete and error-prone geological and historical records of rare events,” he said. “These difficulties are ubiquitous in geohazards, and we expect our approach will be used for reappraising other types of hazard, such as earthquakes.”

Are you concerned about supervolacanoes? Asteroids? Other Earth-affecting disasters? Why—or why not? Post your comments below.

If you liked this article, share it with your friends.