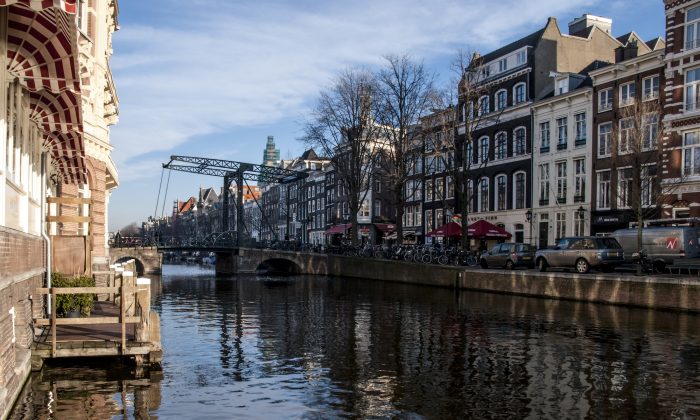 An Amsterdam canal in this file photo. (Belen Estrella Fiallo/Special to The Epoch Times)
Europe

Hundreds of shiny copper plaques placed throughout the district point to the abundance of accounting firms in luxurious offices, many of them offering consulting services to major corporations on how to move profits through Dutch subsidiaries, drastically lowering tax payments.

The “Dutch Sandwich,” as the arrangement has come to be known, involves transferring a company’s profits through The Netherlands, where tax regulations are laxer. The plan has often been used with Irish profit-shifting tools such as the “Double Irish,” although Ireland recently closed the tax loophole that allowed such tactics.

As an example, Google managed to move 15.9 billion euros ($19.2 billion) to a Bermuda shell company in 2016, which saved the company at least $3.7 billion in taxes, according to a report by Bloomberg. Under this plan, Google shifted revenues from one Irish subsidiary to a company in the Netherlands without any employees, and then to another Irish-owned company located in Bermuda. At the heart of the Dutch Sandwich is that tax regulations in The Netherlands allow royalties to be made to offshore locations such as Bermuda without withholding taxes.

The unique tax construction has been used to the advantage of giant multinationals such as IBM, Nike, and Proctor & Gamble, as well as popular entertainment bands such as U2 and the Rolling Stones, to significantly lower tax payments.

Recent disclosures through major media leaks, such the Paradise Papers and Panama Papers, have revealed more details on the extent of tax-avoiding techniques used by the corporations, and have ratcheted up pressure on The Netherlands to tighten its tax rules.

According to a report by the Organization for Economic Co-operation and Development (OECD), The Netherlands was the fourth-largest recipient of foreign direct investment worldwide in 2017.

A report by the American Chamber of Commerce says foreign companies account for almost 40 percent of the revenue in the Netherlands, and employ close to one-fifth of the business workforce in the country. U.S. companies account for over a third of that revenue, and close to a quarter of those jobs, the Chamber says.

According to the Amsterdam-based Center for Research on Multinational Corporations (SOMO), there are 14,000 “shell” or letterbox companies in the country.

Arnold Markies, a researcher with SOMO, explains that the Dutch equivalent of Internal Revenue Service (IRS) doesn’t impose any taxes on the shell companies as it assumes they would be taxed elsewhere. Meanwhile, in the United States, the IRS assumes that the company was taxed in the Netherlands. That’s why the companies can avoid paying taxes in either country.

In an effort to dissuade U.S. companies from moving profits overseas, President Donald Trump signed a tax bill into law in 2017 that cuts the corporate tax rate to 21 percent from 35 percent.

The Dutch government has also announced it is taking steps to tighten its tax laws, with Dutch politicians denying that the country is a tax haven. The government hopes with the changes, companies will be creating real operations in the country, rather than just establish letterbox companies.

As part of the changes, the country would impose taxes on profits transferred offshore to discourage companies from using tax loopholes.