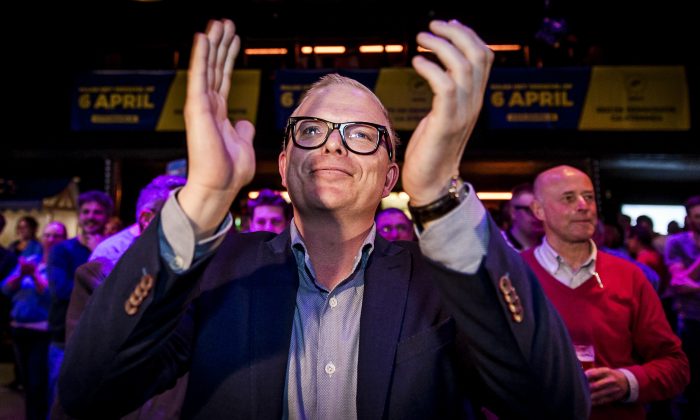 GeenPeil frontman Jan Roos, initiator of the Dutch referendum on the EU's treaty of association with Ukraine, follows the outcome of the referendum in Amsterdam on April 6, 2016. Dutch voters rejected a key EU-Kyiv pact in a referendum seen as a barometer of anti-EU feeling, but it was not immediately clear if enough people had taken part for the ballot to be valid, exit polls showed. (Remko de Waal/AFP/Getty Images)
Opinion

The European Union’s treaty with Ukraine was rebuffed by Dutch voters on April 6 with over 60 percent rejecting it in a low turnout referendum. The government must now reconsider the treaty. Initiators of the referendum hope that it will be a step towards a “Nexit”—the exit of the Netherlands from the EU. But even if more Dutch referendums are possible on EU issues, a withdrawal from Europe is rather unlikely.

On July 1, 2015, the Advisory Referendum Act came into force in the Netherlands. If sufficient signatures are collected—10,000 in four weeks and then 300,000 in the subsequent six weeks—a referendum can now be held on a law or treaty. If the turnout is higher than 30 percent, the government is formally obliged to reconsider the law or treaty.

The Euroskeptic foundation Burgercomité EU favors the restoration of democratic sovereignty to the Netherlands, as it considers the cession of sovereignty by parliament an “act of treason.” And it perceived the Referendum Act as an opportunity to give the Dutch people a direct voice in the EU, and a way to mobilize opposition against the Netherlands membership of the EU.

The idea that a small trading country would be worse off outside the EU is still widespread.

The Association Treaty between the Ukraine and the EU is the first piece of legislation since July 1 last year that the Burgercomité EU has targeted with the new act. Most parties in both chambers of parliament had supported the treaty in spring 2015, but it’s no surprise that some voters think differently, because the EU issue has not had much influence on voters’ choice of parties in parliamentary elections.

The satirical blog GeenStijl and the Forum voor Democratie, both critical of the democratic nature of the EU, joined the initiative of Burgercomité EU to use the new act to get the reconsidered. GeenStijl provided crucial mobilizing power, garnering media attention and collecting signatures digitally. After sufficient signatures were obtained, an independent Referendum Committee determined the referendum question according to the format prescribed by the law. It read:

Are you for or against the law ratifying the Association Agreement between the European Union and Ukraine?

The Referendum Committee also provided subsidies for campaigners, be they neutral, against, or in favor.

How the Referendum Unfolded

The government decided to adopt a low-key campaigning strategy, aiming to keep the turnout below 30 percent. Enlargement is the least favored part of European integration among Dutch voters, tying in with concerns about loss of power and identity in an ever-more expanding EU. These concerns contributed strongly to the no vote in the previous referendum on the European Constitution in 2005.

Economic pragmatism has been the main argument for supporting European integration from the very beginning among the Dutch public. But Ukraine’s small economy and widespread corruption did not help to convince voters that the Netherlands would benefit from closer ties between the EU and the Ukraine.

Instead, there were worries about financial support for “a second Greece.” This meant the no side had a considerable advantage. The no side, also consisting of the Socialist Party, the Animal Rights Party, and the Freedom Party, emphasized that the treaty would actually destabilize Ukraine because it would provoke an even more troubled relationship with Russia. It also underlined the need to solve the EU’s own problems before becoming involved more closely with a country at war.

The Future of Europe Depends on This Vote in the Netherlands

Even if a large majority in parliament supported the EU-Ukraine treaty, only the social-liberal D66 party made some serious efforts to rally support for the yes vote in the referendum, accompanied by foundations such as Stem voor Nederland. They emphasized the potential economic benefits, the chance of improving human rights, democracy, and the rule of law in the Ukraine, and the possibility of enhancing stability there.

It also had to convince yes voters to vote, however, because some of them hoped that the turnout would remain below 30 percent if they would stay at home.

The turnout was low, not only because of strategic non-voting, but also because of opposition to the idea of a referendum. Additionally, many voters did not know what to vote: not surprising given the rather low level of information in the country about the EU in general and the Ukraine treaty in particular.

Eventually, more than 60 percent rejected the treaty with a 32 percent turnout. Yes voters were found to be among the highly educated.

With the 30 percent turnout threshold narrowly passed, the government is formally obliged to reconsider the ratification of the treaty. Parliamentary elections are looming and must be held by March 2017 at the latest, so political parties have also political reasons to take the no vote seriously. The question is how.

The parts of the treaty concerning EU competences, such as trade arrangements, have also been provisionally applied since January 2016. And the Dutch government would be even more wary of any new treaty or treaty change, because it could lead to another referendum initiative.

It is therefore more likely that the Dutch government might seek at EU level to state officially it is no proponent of EU enlargement with Ukraine or to be exempted from the national part of the treaty regarding political, defense, and legal cooperation. It could do this through a declaration or decision by the Council of the European Union.

The referendum has also led to discussions about the easiness to request a plebiscite, but it will be unlikely that political parties dare to change the rules immediately after the first referendum. Meanwhile, efforts are already underway to launch another referendum initiative as soon as the EU and its member states agree on the Transatlantic Trade and Investment Partnership—another sticking point.

A referendum on Nexit is legally impossible as there is no law or treaty expected to be adopted on Dutch withdrawal by parliament. Nexit is also unlikely, even though 24 percent of the Dutch public thinks the Netherlands would be better off outside the EU. Trust in the EU is particularly low among the less educated. Emotional support for the EU is also weak.

Nevertheless, the idea that a small trading country would be worse off outside the EU is still widespread. A Nexit is therefore unlikely.

Hans Vollaard is a lecturer of Dutch and European politics at Leiden University. This article was originally published on The Conversation.