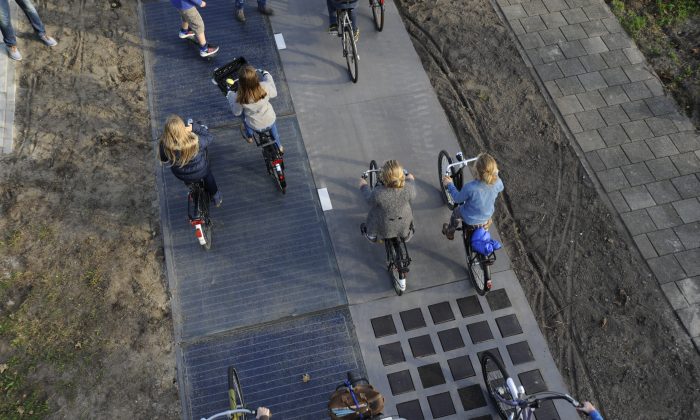 Cyclists use the SolaRoad, the first road in the world made of solar panels, in Krommenie, the Netherlands (Solaroad)
Europe

Six months ago, the Netherlands experimented with adding solar-energy generating functions to a slab of bike pathway. Now, the project, based in the city of Krommenie, has been declared a roaring success.

The 230 feet stretch of solar bike lanes generated 3,000 kilowatt-hours of electricity in the past half-year, enough to power a single-person household for an entire year, reported Al Jazeera.

An assortment of private organizations and the Dutch government were involved in the creation of Solaroad, which aims to eventually allow all of the Netherlands run on renewable energy.

Part of the problem with traditional roof-top solar panels is that there simply isn’t space to generation enough power. Solaroad estimates that even if every Dutch household had such panels, it would still only produce 25 percent of the country’s electricity needs.

This lead to the idea of using roads as another place to position solar panels. There are around 87,000 miles of highways in the Netherlands, an area far larger than the sum of all rooftops in the country.

Solaroads chose to deploy solar grids on bike-lanes rather than on highways because the former lends itself more to small-scale experimentation—the project is expected to go through at least three years of testing.

The task of the engineers will be creating a glass-structure that has all the features of durable pavement and more—
skid resistance, and the ability to endure heat, cold, rain, and trauma from heavy objects.

“This version can have a fire brigade truck of 12 tonnes without any damage,” Arian de Bondt, a director at Ooms Civiel, told Al Jazeera.

The initial research in the run-up to the pilot project took five years, made possible by a 3.5 million euro investment that preliminary studies estimate will take at least 20 years to recoup.