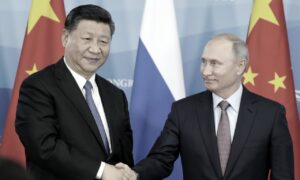 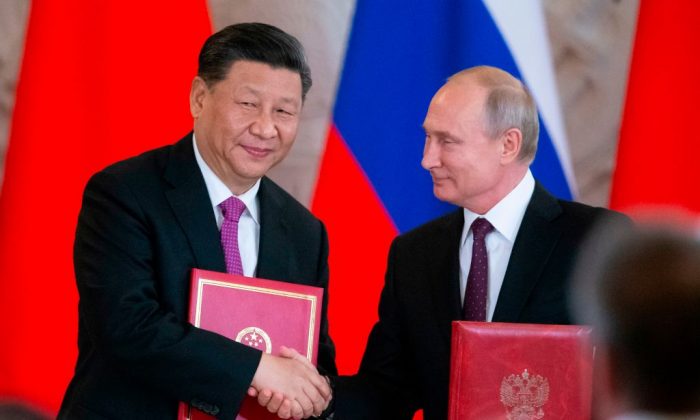 Russian President Vladimir Putin and his Chinese counterpart Xi Jinping exchange documents during a signing ceremony following their talks at the Kremlin in Moscow on June 5, 2019. (Alexander Zemlianichenko/AFP/Getty Images)
Thinking About China

The Dual Faces of Sino-Russian Relations

Two recent events reveal the duality of the relationship between China and Russia.

Xi Jinping and Vladimir Putin witnessed the groundbreaking ceremony of the biggest nuclear energy cooperation project between the two countries via video conferencing on May 19. Putin claimed that current Sino-Russian relations are at their best, while Xi said that the two countries will advance bilateral relations at a higher, broader, and deeper level. This event shows one face that the West is very worried about—China and Russia could be forming an alliance.

However, earlier on May 3, the Russian Great Fatherland Party, in an open letter, accused the Russian Communist Party and its top officials of receiving money and other favors from the Chinese Communist Party (CCP) and serving as its agents in Russia. Some analysts believe that Russian political parties often smear each other, but rarely play the China card to attack their opponents. This incident reveals the other face of the Sino-Russian relations—Russia’s great suspicion of the CCP and the deep contradictions behind its China policy.

In fact, since the end of the Cold War, the two faces of the Sino-Russian relations have often flipped over or become intertwined. Over the years, the world seems to have been more attracted to the face showing that China and Russia are allies.

For example, since June 5, 2019, Chinese state-run media Xinhua reported that when bilateral relations were upgraded to “a comprehensive strategic partnership of coordination for a new era,” especially since the pandemic breakout in 2020, China and the United States have started a new cold war, while Russia’s relations with the United States and Europe deteriorated, prompting China and Russia to work closely together.

There are other incidents that indicate that China and Russia are strengthening diplomatic ties. For example, on Oct. 22, 2020, in response to a question from the media at the Valdai Discussion Club, Putin said that the lack of a military alliance between Russia and China at the moment was not related to the attitude of the two sides, but rather to the lack of necessity. Nonetheless, such an alliance would not be ruled out in the future.

Putin’s response was rich in meaning. In February this year, for example, the Russian and Chinese foreign ministers said during a phone conversation that the strategic cooperation between the two sides is comprehensive.

Within both countries, there are voices for an alliance. Russian senior researcher Vasily Kashin wrote that Russia and China should form a military alliance immediately when there is a risk of military conflict with the United States. Since Russian companies are involved in the development of the CCP’s ballistic missile warning system, Russia and China are well-positioned to build a global missile defense network by sharing data and establishing their own partnership.

On the Chinese side, Wang Haiyun, who had been the representative of the CCP’s armed forces in the Soviet Union and Russia for nearly 10 years, also wrote (pdf) that it is necessary to upgrade the relationship between the two countries to a “near-alliance relationship”—one of “shoulder to shoulder, back to back, hand in hand, heart to heart” with a “special friendly military relationship. … Both China and Russia should be bolder and faster” in deepening military ties, he wrote.

In fact, although Russia and China insist that both sides adhere to the principle of no alliance, no confrontation, and no targeting of any third countries, Moscow and Beijing are already at least “near-allies,” according to Xinhua.

Let’s take a look at just a few examples.

Russia and China hold regular military exercises, with very close military-technical cooperation, including the exchange of military technology between the two sides. It’s noteworthy that Russia has been helping China build a missile warning system. Also, in late July 2019 and on Dec. 22, 2020, Russia and China held two strategic joint air patrols, extending their activities from the Sea of Japan to the East China Sea—this was heavily publicized by state-run media in both countries.

Since 2018, bilateral trade between Russia and China has stayed at about $100 billion, with a new goal of $200 billion set to be achieved by 2024, according to a report by CSIS (Center for Strategic and International Studies). China has been Russia’s largest trading partner for many years, and its percentage share in Russia’s total trade volume has increased from 8.12 percent in 2013 to 15.76 percent in 2018, according to Chinese research consulting firm Qianzhan.

As the economic cooperation between China and Russia strengthens, there are three issues that should be examined.

First, the local currency settlement of Russian-Chinese trade reached 25 percent in 2020, while in 2013 and 2014, it was insignificant, merely at about 2 to 3 percent—this is the so-called “de-dollarization,” according to Chinese news portal Sina.

Second, Russian agricultural exports to China increased significantly in 2020, making agricultural trade a new bright spot of the bilateral economic and trade cooperation, which, in turn, consolidates China’s position as the top export destination for Russian agricultural products. That has extraordinary significance when considering the potential food shortage in China and the strained relations between the CCP and the world’s major food exporters, such as the United States, Australia, and Canada.

Third, the significance of the Sino-Russian energy cooperation—Xi calls it the most weighty, fruitful, and wide-ranging project between the two countries. For example, the Sino-Russian Eastern Gas Project, also known as Power of Siberia, was officially brought into operation in December 2019, with an export capacity of 38 billion cubic meters per year, equivalent to more than 30 percent of China’s natural gas imports in 2018. Meanwhile, Russia has already begun its preparation work on the Sino-Russian Western Gas Pipeline Project, Power of Siberia 2.

However, such a “strategic partnership” highly touted by the Chinese and Russian authorities cannot conceal or cover up the dirty and conflicting nature of the bilateral relations.

Here is just one example. On Feb. 25 of this year, a local resident named Vladimir Vasiliev was charged in an espionage case for collecting intelligence for China’s spy agency, and was sentenced to eight years in prison for treason by a court in Russia’s Zabaykalsky Krai in Chita. The case was different from most espionage ones—it had nothing to do with the field of science and technology, but it took place in the border area of military significance. Russia had deliberately kept the case under low profile.

So, despite the increasingly closer relationship between Russia and China, why is it that both countries plot against each other and espionage activities have become more frequent?

In fact, in terms of foreign relations, Russia has been taking a highly defensive approach to contain and counter the CCP’s growing influence, particularly disturbing the Chinese regime.

For example, Russia exported a large number of advanced weapons to India following the border conflict between India and China in 2020. Russia and India have been working to forge a new military-technical cooperation program for the next 10 years. In addition, Russia has been helping India build fifth-generation aircraft and submarines and develop highland tanks, and so on, all of which are intended to contain the CCP.

As another example, with Central Asia seen as Russia’s backyard, Russia has to counter the expansion of China’s influence there. This year, the withdrawal of U.S. troops from Afghanistan has drawn more attention to the security issues in that region, and the CCP has used the newly established “5+1” mechanism to increase interaction with Central Asian countries.

On May 12, Chinese Foreign Minister Wang Yi met with his counterparts of five Central Asian countries in Xi’an to “strengthen strategic mutual trust” and “advance high-quality Belt and Road cooperation,” according to a press release by the Chinese Ministry of Foreign Affairs. On May 14, Russia’s pro-government media fiercely criticized Beijing for interfering in the internal affairs of Central Asian countries, according to a report by Voice of America (VOA). The CCP has contributed to rampant corruption in Central Asia by paying large bribes to powerful local officials, the report said. In fact, as anti-CCP sentiment in some Central Asian countries grows, Kazakhstan passed a new law on May 13 that officially bans the sale and lease of agricultural land to foreigners.

It’s no secret that there has been a tug-of-war between Russia and China over Central Asia in the past few years.

A case in point: In September 2019, Putin visited Mongolia and the two sides signed an agreement to foster a strategic partnership. In another major move, in July 2020, Russia offered Mongolia to join the Russian-led Collective Security and Defense Organization (CSDO) to enhance bilateral relations.

The current CSDO members include Armenia, Belarus, Kazakhstan, Kyrgyzstan, Tajikistan, and Russia. As CSDO members, Russian-made weapons can be purchased at cheaper domestic prices. Large-scale military exercises are held annually on the territory of some member states. In recent years, Russia has brought nuclear-capable Iskander tactical missiles into Kyrgyzstan and Tajikistan through joint military exercises.

If Mongolia were to join the CSDO, it would become the first non-CIS member of this organization; more importantly, it would serve as a strategic deterrent against the CCP.

From the aforementioned moves made by Russia, one can have a glimpse at its dual-faced strategy towards China.

On the one hand, Russia will maintain close relations with the CCP to boost its economy and counter the strategic pressure from the West. On the other hand, it will forge closer relationships with China’s neighboring states and Asia-Pacific countries to avoid over-reliance on the CCP and to strategically keep in check the Chinese regime’s influence and ambition.

The strategic approach that Russia has taken toward China is based on the relative strengths of the two countries.

First of all, the Russian economy has been sluggish since 2008, and the economic gap between Russia and China has widened dramatically. For example, in 2020, Russia’s GDP was about $1.46 trillion, compared to China’s $14.8 trillion, according to Statista. Secondly, Russia still perceives itself as a world power, unwilling to just be a supplier of energy and raw materials to China, and wants to be on an equal footing with it. Russia has one more advantage over China—its military technology.

The former Soviet Union’s weaponry and equipment have long been the targets of the Chinese regime, which has wanted to acquire them by purchasing, copying, or stealing. But how long can Russia hold this military technology advantage over China? According to a senior researcher at the Stockholm Peace Research Institute (SIPRI) in Sweden, Russia may have only five to ten years until China eventually catches up. When that happens, how will Russia be able to compete with China for equal status?

The Russian authorities are well aware of the inherent contradictions and flaws of their current strategy toward China. Now, if Russia can’t see the true nature of the CCP and if it continues to hold on to its dual-faced strategy in dealing with China, then Russia will be in danger.