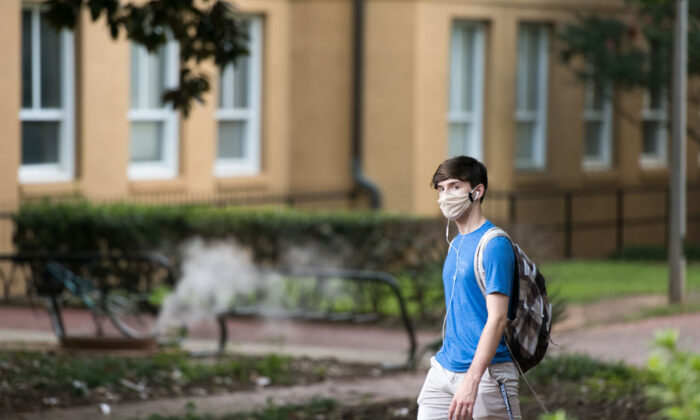 A student walks on campus at the University of South Carolina in Columbia, S.C., on Sept. 3, 2020. (Sean Rayford/Getty Images)
Viewpoints

The Dreadful Toll of Campus Injustice in Australia

A few years ago, an engaging young overseas-trained doctor arrived in one of Australia’s biggest cities to do post-graduate research. He was a popular and confident student, soon appointed to leadership roles at the university college where he was staying, thrilled to be part of its student community.

A photo of him taken a year later shows his hair starting to fall out (alopecia) through stress after monstrous treatment from his university following an unfounded, malicious sexual assault allegation.

Two years later, a jury took 20 minutes to dismiss the case after a two-week trial. After the criminal trial, the court took the unusual step of awarding costs against the Crown, with the judge stating a proper investigation would have revealed that the complainant was “very substantially lacking credit” and the case should not have been commenced.

But there was never any proper investigation. This young man was treated abominably by this tertiary institution.

After the complaint was made, he was given two hours to leave the college and was not allowed to discuss with anyone why he was being evicted. Relevant witnesses were never interviewed, he had no chance to present a proper response to the allegations.

He was dumped far from his former college, alone and publicly shamed, while the accuser spread lies about what had happened.

The coordinators of his post-grad program were told before he was even charged, that he could not take part in clinical work or research because he was under investigation.

His education plans were derailed, his life was put on hold. He has spent the last few years working as a waiter, couch surfing with friends or living in a hostel, having spent his savings, with help from his family, defending his criminal case.

Since he contacted me in late 2020, we have been doing our best to support him, including using immigration lawyers to keep him in the country whilst pursuing action against the university.

Late last year, our excellent campus justice team achieved a confidential settlement with the university. He is now studying and seeking medical registration to practice in Australia.

Meanwhile, universities across the country continue to believe the victim and the presumption of innocence as a cornerstone of our system of justice is ignored.

In Australia, each year dozens of accused young men are shafted by tertiary institutions to appease the lynch mob.

What’s unusual about our young doctor’s story is he didn’t fall victim to an aggrieved young woman. He is openly gay and his accuser was male.

But the “believe-the-victim” rules applied just the same, even though the accuser was a known troublemaker, having attracted unfavourable attention for making aggressive comments to women in the college.

There’s a worrying parallel to the Melbourne story I wrote about earlier this year, in that our doctor, like Chris from Melbourne, had a supervisory role in the college, requiring him to look after students.

It says a lot about the vulnerability of men in this circumstance who are required to impose rules that easily create resentment amongst students, setting themselves up for vengeful allegations.

It began when our doctor was asked by the college’s director to speak to the accuser about a particular incident of being aggressive towards a female student and to urge him to seek counselling. He did that and the accuser reacted badly, accusing him of betraying their friendship.

But then, a few days later the accuser was all over the doctor, openly flirting with him in public, inviting himself to his room—in front of witnesses. They’d just started consensually kissing when the accuser suddenly jumped up and left the room, for no apparent reason. It seems like it was all a set-up, a clumsy form of entrapment as payback for the doctor’s role in reprimanding him for his bad behaviour.

Our doctor then discovered the accuser was claiming he had been sexually assaulted by him. The doctor made a report to the student liaison officer, explaining it was a false accusation, listing witnesses who could confirm the proceeding events that evening. This evidence was not pursued.

Within a week, the doctor learnt an official sexual assault complaint had been made alleging digital penetration without consent had occurred during the encounter in his room.

Ultimately the jury found our doctor not guilty of this charge, with a subsequent court finding the allegation couldn’t be substantiated due to the complainant’s lack of credibility.

On top of that, there was the blatantly sexually flirtatious behaviour by the complainant who changed his complaint, lied to the police multiple times, and tried to suppress evidence and influence witnesses.

Vital evidence supporting the accused had been withheld by numerous officials at the university during their contact with the police and it required subpoenas and orders from the judge for the forceful release of this information during the trial.

Even after the jury dismissed the case and the court made its clear ruling, the university kept open the option of conducting its own misconduct investigation for eight months.

Whilst we celebrate this settlement over a university, it is frustrating that the legal grounds focused on how the officials had slipped up in minor areas of administrative law, rather than addressing the use of these draconian regulations to adjudicate sexual assault.

The Queensland Supreme Court ruled in 2019 that universities shouldn’t be making these decisions but this was overturned on appeal.

The fact remains that universities are unable to conduct investigations in a manner that provides proper attention to due legal process.

As the Supreme Court judge commented: “It would indeed be a startling result if a committee comprised of academics and students who are not required to have any legal training could decide allegations of a most serious kind without any of the protections of the criminal law.”

But that is just what is happening, and universities are getting away with it.