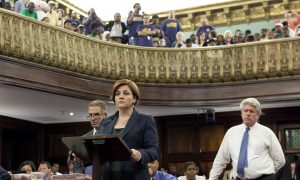 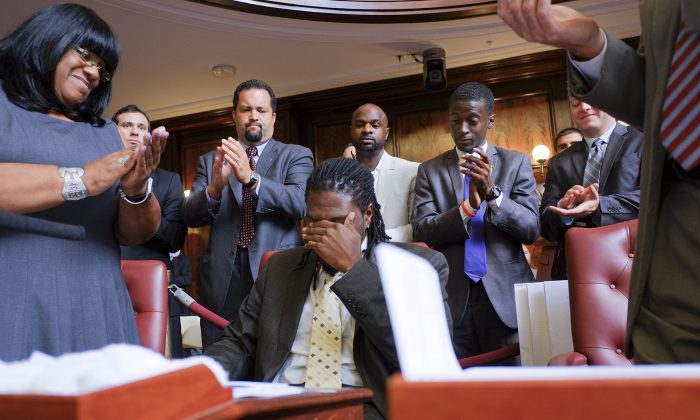 The Drama Behind the Historic Stop-and-Frisk NYC Council Vote

NEW YORK—Council Member Jumaane Williams had two minutes to speak before voting to override the mayor’s veto on two historic pieces of legislation aimed at reforming stop and frisk. Having introduced the bills in the fall of 2012, he fought nearly a year to get them into law.

He had spoken passionately about the need for reforming the controversial police practice before, including a moving speech given late into the night on June 27 when the two Community Safety Act bills passed the City Council.

Sometimes passionate, but always composed, Williams reminded the other council members that the bills would not stop stop and frisk, only racial profiling.

Then, as if the realization of what was about to happen hit him, he could no longer hold in his emotion.

“I want to thank my mom,” Williams said, choking up. William’s mother had been in attendance at the City Council hearing on stop and frisk in October of 2012. “My little brother texted me this morning and said he saw me on CNN. He said my father would be proud.”

The Council chambers, with the 51 members, press, and a balcony full of supporters, erupted in cheer.

Despite intense political pressure, 34 Council members—the “Core 34” as they have affectionately known—stuck with their June 27 vote, thus forever changing police policy in the city of New York.

On January 1, 2014, Intro 1079, a bill that will create an Office of the Inspector General (IG) will go into effect. The IG will review, study, and audit the NYPD, as well as make recommendations for procedural changes,

The Council also overrode the mayor’s veto on Intro 1080, which will expand racial profiling laws. The new law, which will take effect in 90 days, will allow New Yorkers to sue in state court, but receive no monetary damages. The lawsuits would only bring procedural changes.

The council faced intense pressure to ensure all 34 members came back to the chambers on Thursday for the vote. If one council member failed to show up, or switched his or her vote, the mayor’s veto would stick.

Mayor Michael Bloomberg spent weeks at press conferences and radio addresses slamming the legislation, saying passing the bills would bring the city back to a time of record crime seen in the 70’s and 80’s.

In an attempt to sway votes, police unions targeted council members, many of whom were involved in trying to get reelection to their seat or a higher office.

At eight and a half months pregnant, there had been concern about Council member Julissa Ferreras making it to chambers to vote. In a flowing green dress, the mother-to-be cast her vote saying, “My son and I vote yes.”

Despite his heated objections, with only four months left in his tenure Bloomberg will have limited options in fighting the laws. Still, he issued a statement on Thursday after the ruling saying, “It is a dangerous piece of legislation and we will ask the courts to step in before innocent people are harmed.”

More likely the next mayor, who will take office on January 1 when the inspector general bill becomes law, will have to set policies with these laws in mind, as well as the recently appointed federal monitor.

A federal judge ruled stop and frisk unconstitutional in early August and ordered a federal monitor in place to oversee stop and frisk.

The top three Democratic contenders have all expressed the desire to reform the way stop and frisk is handled if elected—and all have different ways of doing it.

City Council Speaker Christine Quinn, who is running for the Democratic nomination, helped orchestrate the move that would get the bills out of committee and to a vote. She did, however, vote against the racial profiling bill, and has expressed interest in keeping current NYPD commissioner Raymond Kelly.

Bill de Blasio supported both bills and said he will hire a new police commissioner. He has repeatedly chided Quinn for claiming to want reform, but then suggesting Kelly be kept on.

Bill Thompson, who was backed by several police unions, never supported the council bills, saying with his policies and a new police commissioner, the laws would be unnecessary.

On the Republican side, Joe Lhota blasted the passage of the bills, saying they are bad public policy. “The candidates who support these bills have shown New Yorkers that they are not prepared to lead this city,” Lhota said in a statement.

Like his fellow Democrats, Lhota supports the use of stop and frisk, but would like to see better training to avoid racial profiling.

The next mayor faces a tall order to not only keep the city safe, he or she must also mend the bonds between the police and communities that have been broken during the stop-and-frisk era that saw nearly 700,000 people stopped at its peak.

“We can pass laws to make the framework, but setting a leadership tone for policing from the top down that believes that is possible, and works to get it done, that is what we will need to hear from the next mayor and the next commissioner,” said Council member Brad Lander, who worked tirelessly with Williams to get the bills passed.

“I think we have set the right framework for it, but I deeply hope the next mayor and commissioner will rise to it.”