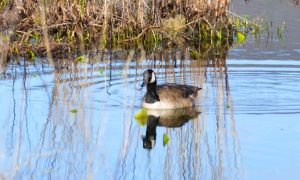 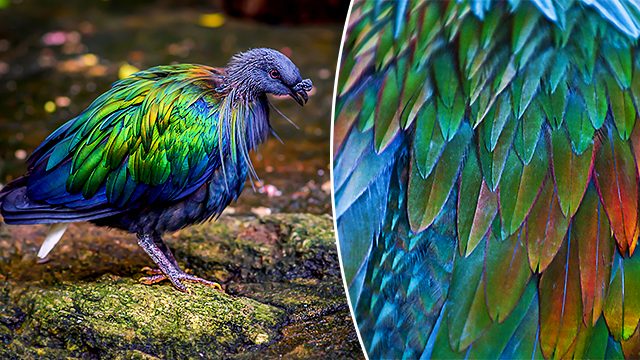 The last dodo bird was publicly spotted hundreds of years ago, falling extinct generations ago and gaining a near-mythical status in history.

Its closest genetic relative, the Rodrigues solitaire, has been extinct for nearly as long—but on islands around the Indian Ocean, the iconic flightless bird has a close cousin that’s very much still alive.

Meet the Nicobar pigeon. Although significantly smaller and drastically different in appearance from the famed dodo, this brightly colored avian species is just as much fun to look at—and if you visit the right zoos and exhibits, you can see one for yourself in person.

Just take a look. Once you do, it’s hard to really look away:

The Nicobar, which lives on the Nicobar Islands and throughout the Malay Archipelago, looks like a massive, plumed cousin of the pigeons one might see on the streets of London.

While most pigeons are typically thought of as somewhat drab, gray birds, though, the Nicobar pigeon matches the tropical islands it calls home. From the neck down, each feather is a gorgeous ombré mix of reds, greens, blues, and indigos, creating an iridescent rainbow of beauty displayed proudly across its back and underbelly. Add in a stark, pure-white tail and red feet, and this is a bird that certainly knows how to stand out.

The population isn’t as safe as it once was, though.

The introduction of new predators to the islands such as cats and rats have caused the population of the birds to dwindle, providing non-native threats that the bird has been forced to adapt to.

Humans have proven problematic to their survival as well. A report in 2016 suggested that people were using the gizzard stones of the gorgeous bird to make jewelry, too. The gizzard stone, a large “stone” in the bird’s stomach, which helps it break down seeds and nut exteriors, boasts a unique enough exterior for jewelry makers to covet it as a prized accessory in pieces they make. Although they’re small, usually no larger than a human’s fingertip, they remain a key reason that the Nicobar pigeon gets hunted down.

You probably won’t see the this pigeon flying around your neighborhood, as it makes its home on remote islands in…

RJ PHOTO OF THE DAY! The Nicobar Pigeon.

This combination of factors has pushed the Nicobar pigeon population down to near-threatened status, inspiring new conservation efforts in an attempt to save the last living species of the caloenas genus of pigeons.

For now, the bird remains relatively safe. It is a “generally scarce to rare” species to begin with, which may have protected it as people in the region potentially left it alone purely out of ignorance. The discovery of its beauty worldwide has luckily coincided with the current animal conservation movement, meaning that most are content to simply look at a neat picture instead of hunting it down on their own.

As long as this gorgeous bird lives, the hilarious and legendary dodo bird—with all its plumage and hilarious sketches throughout the world’s historic folklore—will live on as a long-gone cousin as well!

The Nicobar pigeon, native to the Andaman and Nicobar Islands, India, is the only living member of the genus Caloenas and the closest living relative of the extinct dodo. #WingedWednesday (📷: Ion Moe) pic.twitter.com/T826VKUb54