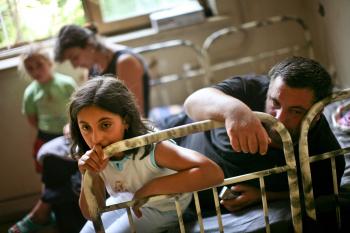 Displaced Georgians from the breakaway province of South Ossetia sit on a bed in a refugee shelter in Tbilisi, Georgia on Aug. 17, 2008. (Uriel Sinai/Getty Images)
International

The Displacement of Georgia

Two years after a crushing five-day war between Georgia and Russia, some 26,000 Georgians who were driven from their homes, still live in collective centers, too scared to return home, a recent report by Amnesty International revealed.

Yet this is only half the story, this is the “second wave” of internally displaced people (IDPs). Conflicts from two decades earlier—the Georgian-Ossetian conflict in 1989 and the Georgian-Abkhazian conflict in 1992—also forced hundreds of thousands of Georgians from their homes. Today, roughly 6 percent of the population, or 246,000 people, remain displaced according to the report titled “In the waiting room: Internally displaced people in Georgia.”

While a large portion of the IDPs have found some sort of private housing solution with friends or families, or on their own, nearly 42 percent are forced to live in collective centers—state or privately owned buildings such as hospitals, kindergartens, sanatoriums, dormitories, and barracks.

The last comprehensive assessment of these centers by the United Nations Office for the Coordination of Humanitarian Affairs (OCHA) in 2003, found that 70 percent did not meet minimum shelter standards, lacking adequate privacy, access to water, proper insulation, and functional sewage systems.

It was not until 2007, long after the first wave of IDPs and just before the second, that the Georgian government adopted a strategy to address the problem of IDPs. It sought to provide conditions to integrate IDPs into the communities where they were living, at least until returning home became a viable option. Before that, people were more or less left to their own devices.

While this obligation to provide IDPs with durable housing solutions has been acknowledged, Amnesty points that those people need much more.

“Displaced people need more than just roofs over their heads. They need the government to ensure employment, access to health care, and benefits. They also need to be consulted and be able to make the choices affecting their lives,” said Nicola Duckworth, Europe and Central Asia Program director at Amnesty in a statement.

Displaced people suffer from high unemployment leading to a loss of hope and initiative. Those with professions rarely found jobs in their fields and report that their skills have atrophied. The government is still lacking comprehensive programs targeting this issue.

Poor living conditions and poverty undermine the health of displaced people, while the lack of information and the costs for medical treatment make it even more difficult for them to get health care.

“The Georgian government has taken important steps, but housing solutions have to go hand in hand with health care, employment, and livelihood opportunities. This is the only way to fully integrate the tens of thousands of its citizens still living in limbo,” states Duckworth.

According to the report, people still fear to return home, although nobody forces them away, mostly because of the unsolved conflicts in the region. IDPs shared with Amnesty that while temporary return to their homes would be possible, they were too afraid to risk it. Even though their houses were intact and neither the Russian troops, nor the South Ossetian authorities were preventing their return, the presence of Russian and South Ossetian forces, as well as the unpredictability of their attitude toward ethnic Georgians, made return too dangerous an option.

Many also complained about a lack of information about their possible resettlement or return to home. Several of them reported to have been moved numerous times during the last year without being informed or consulted.

During Amnesty’s visit in June last year, several displaced persons on the Georgian-controlled side spoke about being induced, or subjected to pressure, by officials to return.

Waiting for the government to take care of them, people still feel uncertain of their futures, or the future of their children.

“Seventeen years ago, when the war broke out, I was a student of foreign languages at the state university, but never finished. Now my son is in high school, but I do not have any means to afford his university education. I can not rebuild my future any more, maybe I no longer have the prospects of ever finding employment, but I ask the government to at least give more prospects to my children so they have a better future,” a woman named Iza, living in a collective centre in Kutaisi, told Amnesty investigators.

The conflicts in the region of Georgia have a history of nearly 20 years. They represent inter-ethnic and Russia-involved clashes. In 1989, the conflict broke out between Georgia and its former autonomous region South Ossetia. As a result, 3,000 people died, 62,000 people, both ethnic Georgian and South Ossetian, fled or were forcibly displaced in Georgia and outside its borders. About 11,000 became IDPs in Georgia, and 50,000 became refugees, mostly in Russia.

The situation is similar with the autonomous region of Abkhazia, whose status went unresolved after the Soviet regime fell and Georgia declared independence. A military conflict ensued. The Abkhazian side received some military support from the Russian Federation, although this has never been officially acknowledged by Russia.

For Georgians the war was a patriotic one aimed at restoring the territorial integrity and sovereignty of Georgia, while Abkhazians take it as a liberation war against Georgian aggression.

Roughly 10,000 people died during that conflict, and some 300,000 ethnic Georgians fled the region. Peace was reached in 1994 after U.N. intervention.