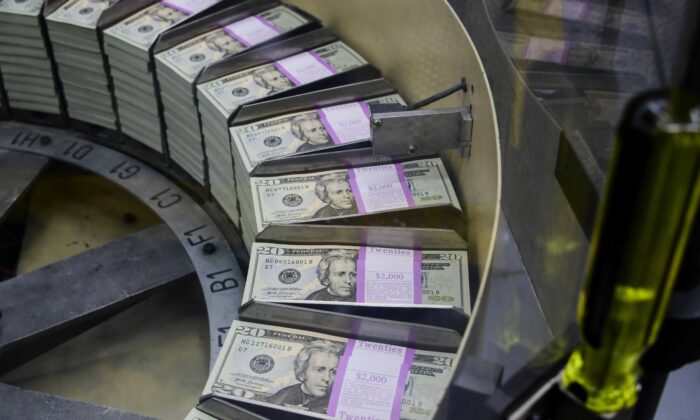 Packs of freshly printed 20 USD notes are processed for bundling and packaging at the U.S. Treasury's Bureau of Engraving and Printing in Washington on July 20, 2018. (Eva Hawbach/AFP via Getty Images)
Business Columnists

Unlike cryptocurrencies, such as Bitcoin, CBDCs—as their name implies—are issued by central banks and have a value equivalent to the denomination of the national currency, so they would be issued in dollars, yuan, euros, etc.

Nearly all the leading developed and developing economies have plans to issue CBDCs, are exploring or actively exploring CBDC feasibility, or are engaged in research to issue them. Nigeria is the only country that has actually implemented a CBDC, with its e-Naira.  China is probably the next most advanced, having conducted a wide experimental issuance of its digital yuan, mostly referenced as the e-CNY.

There would be obvious benefits to what I’ll call a digital dollar, or e-USD. It’s a means of exchange that avoids the fees that vendors have to pay on debit and credit card transactions.  It also would, at least in theory, make cross-border payments more direct and less costly than those processed through the banking system.

As the move toward CBDC has gained momentum, there have been numerous comments in the financial press and social media about the shortcomings of CBDC.

Social media is awash with fears that “the government” will be able to track your spending, and that is true, assuming a nefarious government. But that’s not terribly different from “the government” looking at your bank account, your credit card statements, or your tax return, assuming the authorities are nefarious; otherwise, the government would have to have probable cause to do so. (I somehow doubt very much that “Big Brother” would care much that I bought a bagel for breakfast or much about most of my other financial transactions, if they had no other reason to look at me.  And with 332 million people buying stuff every day, the government would be overwhelmed monitoring us all.  If the government were to be nefarious—and I have been wary of the power of government over individuals since I was a young teenager in the Watergate Era—it would find a way to persecute us citizens with or without CBDCs.)

The other big fear, mostly from the financial press and bank lobbyists, is that people would keep their money in CBDC digital wallets instead of bank accounts, thereby crashing the bank deposit system. But that need not be the case.  China, for example, treats its e-CNY as the equivalent of cash in your pocket, paying no interest, unless the e-CNY is deposited in a bank. If you do, then your e-CNY earns interest.   So, just as you deposit money in a bank to earn interest, you would deposit some e-USD into a bank account to earn interest.

Overall, I have little concern about the more popular concerns with digital currency.  The more troubling aspect of the e-USD is—and the dirty little secret that is not mentioned much—is a matter of perspective.

Even the most casual reader of the financial press knows that the Federal Reserve has a “target rate” of inflation of 2 percent.  There doesn’t seem to be any kind of legal authority for that, though most assume it is a “buffer” to avoid what economists call a “liquidity trap.”  (In a liquidity trap, monetary policy drives rates to at or near zero and monetary policy becomes ineffective to stimulate the economy.   In theory, prices fall and a depression ensues because there is no demand, debtors default, banks fail, etc.)

But another reason for the 2 percent target inflation is to keep you spending and investing.  If you keep $10,000  in your mattress, and inflation is 2 percent per year, the $10,000 you put away would be worth about $5,000 in purchasing power—half as much—in 35 years, all things being equal.  You have incentive to spend or invest your cash to avoid even a modest level of inflation.

And this is where perspective comes in.

We’ve had a 2 percent target of inflation for quite some time. But in a financial crisis, like in 2008, the Fed will want to go to a Zero Interest Rate Policy, or ZIRP, to stimulate borrowing.  But in 2008, that was it; the Fed could go no further.  The Fed was at what economists call “the zero (or lower) bound”; rates could go no further.

And that leads us to the dirty little secret about CBDC.

In a 2015 speech, the Chief Economist for the Bank of England, Andy Haldane, speculated about how central bankers could go below the zero lower bound, or ZLB, in a speech entitled, “How Low Can You Go?”

Economists, Haldane said, had been searching for a means to go below the ZLB since at least 1916, when an economist proposed a stamp tax on paper currency as a penalty for holding it; effectively, a “negative interest rate.”

Haldane said, “One interesting solution … would be to maintain the principle of a government-backed currency, but have it issued in an electronic rather than paper form. … it would allow negative interest rates to be levied on currency easily and speedily, so relaxing the ZLB.” [Emphasis is mine.]

Haldane went on to say: “That is why work on central bank–issued digital currencies forms a core part of the Bank (of England’s) current research agenda. Although the hurdles to implementation are high, so too is the potential prize if the ZLB constraint could be slackened. Perhaps central bank money is ripe for its own great technological leap forward, prompted by the pressing demands of the ZLB.”

Seven years after Haldane’s speech, we are mostly out of the issues of the ZLB. But perspective about digital currency and the ZLB still comes into play because the Fed might need to return to a ZIRP sometime in the future, when we have a digital currency.

Here’s why: If I hold cash and inflation moves to reduce the purchasing power of my cash, I still have my cash, even though it is devalued. I have been affected, but the means by which I was affected was entirely benign; the government has done nothing to affect my property.  It has simply decreased in value, the same as any other commodity.

But with a digital currency, if the Fed wishes to go below the ZLB to create negative interest rates, it effectively needs to reduce my holdings of digital currency; that is, the Fed will need to confiscate some of my cash from me if I do not spend it. Doing so, or threatening to do so, would surely stimulate purchases and investment, but it’s also clear, at least at first impression, that the Fed is prohibited from doing so, if my Seventh Grade Civics still holds true.

That’s because Article V of the Constitution provides, “No person shall be … deprived of … property, without due process of law; nor shall private property be taken for public use, without just compensation.”

Were the Fed to start taking peoples’  e-USD in a financial crisis to stimulate spending would require “just compensation” or “due process of law”; that is, an act of Congress. That might happen, in the manner of a tax, but it would not be—and should not be—a power of the Federal Reserve.

In my view, Congress and its committees that oversee the Federal Reserve should resolve how to treat digital currency at the ZLB before it rolls out the e-USD.

Our rights under the Constitution are at stake.