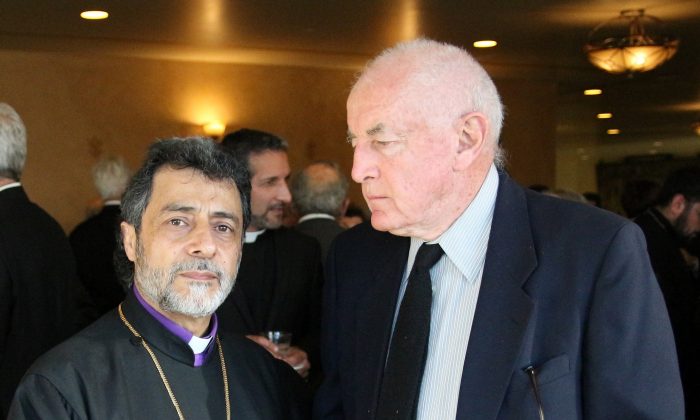 The Digital, the Archdiocese, and the Diasporas

SBB: Your Holiness, On Sunday, Pope Francis celebrated a mass at St. Peter’s Basilica to commemorate the 100th anniversary of the slaughter of 1.5 million Armenians, and declared those killings by their name: genocide. Would you share your thoughts on this bold, first such Vatican announcement with our readers?

Archbishop Derderian: Yes Shelley, it would be my pleasure to do so. By making this announcement, by stating this brave, forward-thinking declaration, his Holiness, the Pontiff, has shown himself to be a Prince of peace. His Holiness’s voice spoke out for historical mercy for the victims of that century’s first Genocide. And in doing so, he spoke out against the spiritual crime, as well as the worldly crime of Genocide. His Holiness statement reached out over a century to give life to those fellow Armenians whose voices were taken from them, as well as their lives, and their futures. His Holiness, has shown-himself to be a hero in behalf of spiritual strength and rich and enriching mercy.

SSB: Your Grace, may I ask what effect do you think the Pontiffs announcement will have internationally?

Archbishop Derderian: Our prayers and hopes are that this announcement by His Holeness is a new path on this historical journey, at the end of witch, there will be the grace and renewal of spiritual healing. A healing for all. History should be a guide to a future of joyful and Honorable good will.

SBB: My Grace, I thank you for sharing your thoughts on this day in this magnificent Cathedral.

Archbishop Derderian: We come together in peace, in Prayer and in father.