The Digital Dollar Will Not Be ‘Anonymous,’ Says Fed Chair Powell 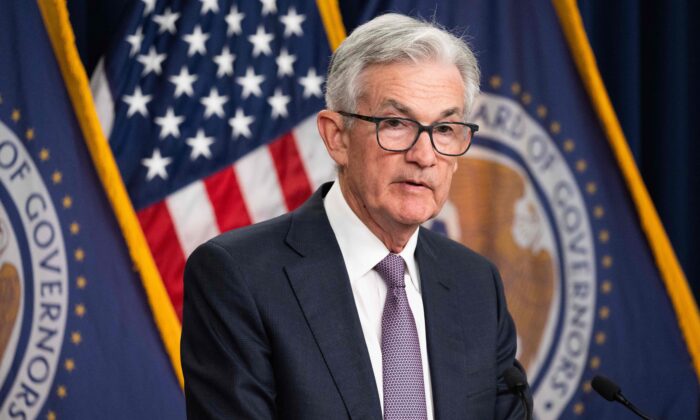 Federal Reserve Board Chairman Jerome Powell speaks during a news conference in Washington, on Sept. 21, 2022. (Saul Loeb/AFP via Getty Images)
By Naveen Athrappully

The central bank digital currency (CBDC), or digital dollar, would not be anonymous, according to Federal Reserve Chairman Jerome Powell, thereby eliminating one of the main advantages of using cryptocurrencies.

If the Fed were to pursue such an option, said Powell, there would be four minimum CBDC characteristics. The first would be intermediaries—it wouldn’t be based on a peer-to-peer distribution network like Bitcoin. The second would be privacy protections. The third would be identity verification, which means the digital dollar “would not be anonymous.” And the fourth characteristic would be that CBDC would be “transferable or interoperable.”

“We would be looking to balance privacy protection with identity verification, which has to be done, of course, in today’s traditional banking system as well,” Powell said during an appearance at a Banque de France event on Sept. 27.

The European Central Bank (ECB) echoed the Fed chair’s viewpoint regarding the anonymity of digital currencies.

“There would not be complete anonymity as there is with … bank notes” when using the digital euro, said Christine Lagarde president of the European Central Bank (ECB), at the event. “There would be a limited level of disclosure and certainly not at the central bank level,” she added.

Regarding the issuance of the CBDC, Powell said, ”We do not see ourselves making that decision for some time,” and that the central bank is working alongside Congress and the executive branch on the issues facing the digital dollar, including policy frameworks and technology. This includes “building public confidence in our analysis and ultimate conclusions.”

Recently, the White House Office of Science and Technology Policy released a set of technical instructions and recommendations for the CBDC. Based on this, the CBDC would be largely regulated, and it would require permissions from governing parties. The central bank could also track purchases and restrict the user’s access to the funds.

The CBDC system would be managed by “a set of trusted entities” or a network of system participants or a combination of the two.

Transactions would be divided into different tiers based on privacy, financial inclusion, and other factors. When “lower” tier users—who provide less identity-verification information—make use of the system, they could be “subject to transaction limits,” unlike “higher” tier users.

Detractors of the CBDC claim that the currency can be made into a mechanism that is like the Social Credit System, a citizen-scoring scheme currently employed by the Chinese Communist Party (CCP) to regulate Chinese citizens. Under the system, the CCP gets to decide what sorts of facilities are granted to the average citizen based on their compliance to authoritarian rules.

“Without privacy, blockchain is a perfect tool for warrantless financial surveillance. Let’s not kid ourselves by pretending otherwise,” noted Paul Grewal, the chief legal officer of Coinbase, in a tweet last month.

Lagarde noted that the ECB will move into the prototype phase for the digital euro in 2023. She mentioned that the currency would be regulated to the extent that “safeguards” would include “limitations to the holdings” or “a sophisticated tiering system in terms of remuneration.”

Such levels of monitoring would allow governments easy access into the citizen’s account balances and transactions as well as control on how and where they spend their money.

According to the think tank Atlantic Council, 105 countries, representing more than 95 percent of global gross domestic product, are exploring a CBDC. Among these, 50 countries are in the advanced phase of the exploration, 11 are launched, and 15 are in pilot stages.