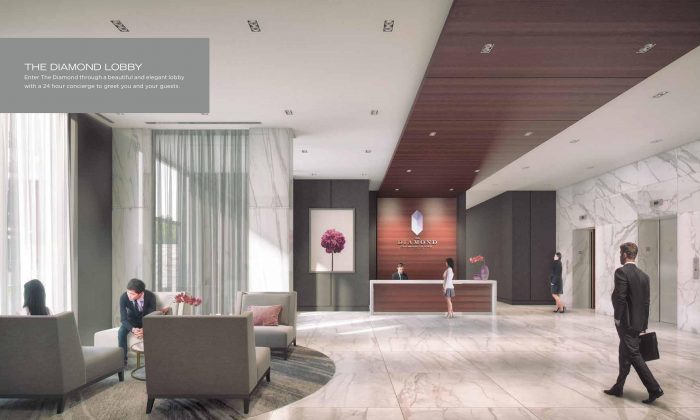 The Diamond Will Add Sparkle to North York Skyline

“And they could not be happier to be here,” project sales leader Dinah Steele tells Epoch Times, noting that the high-end builder is “very selective” in the properties it purchases and considers the Canterbury Place location “second to none.”

The building—designed by Scott Shields Architects and Taylor Smith Architects—is situated between Finch and Sheppard Aves, a short stroll from two TTC subway stations. One of those, Finch, already a regional transit nexus, will also be a terminus for the LRT line coming to that corridor.

The Diamond will have 384 suites, ranging from 439-square-foot one-bedrooms to 977-square-foot three-bedrooms. (Larger penthouse units, occupying the top five floors, will be released later, as will a collection of townhomes.)

Currently in pre-sales, the project will be released to the public next month. With a selection of larger suites at reasonable prices—an 839-square-foot, three-bedroom suite is selling for $491,000—the project has an edge on its downtown competition, says Steele.

“With most projects downtown, when you get bigger, the price tag is so huge it becomes unaffordable.” (The Diamond is slated for January 2019 delivery. Maintenance fees are 54 cents per square foot.)

The development is targeting young professionals and new families, as well as home owners living in the area but looking to right-size into a carefree, low-maintenance condo. It should also prove popular with investors seeking larger product.

“A project like this, being close to transit, it’s more marketable in the future to have a two-bedroom you can rent out to two people,” says Steele. And prices for condos in transit-oriented buildings along Yonge “are only going to keep going up,” she adds. “So by getting in now you’ll be making money.”

The Diamond’s location is transit-friendly, but it’s walkable, too. And the condo is close to the hustle and bustle farther south around Yonge and Empress—a dining, shopping and entertainment hotspot—but it’s far enough removed that “when you go home, you leave it,” says Steele. “You’re along a quieter stretch of Yonge here.”

Suites at The Diamond will have nine-foot ceilings, pre-finished laminate flooring in the main rooms, and porcelain tile in the bathroom and laundry area. Most residences will have balconies or terraces. Kitchens come with granite countertops and stainless steel appliances, including a fridge with panelled front, incorporating it into the cabinetry.

The Diamond will have a 24-hour concierge, underground parking, and ample amenities. On the first floor will be a party room with fireplace, full kitchen, billiards and games room, theatre room, and library with fireplace. Second floor amenities include two furnished guest suites, yoga studio, fitness room, and men’s and women’s saunas and change rooms.

But the real conversation piece is The Diamond’s forecourt, a private park on the property’s south side created by the tower being set back from the street. Designed by Ferris + Associates Inc, this outdoor room will have stone walls, a rose garden and water feature, plus barbecues and dining tables. “It’s your own private park in the middle of the city,” says Steele.

Developer Diamante has built more than 5,000 residential units over its 25-plus years of operation. This includes a roster of high-end condos across Toronto such as The Florian, Phoebe on Queen, One Balmoral, Domus, Two Roxborough, and One City Hall.

“People who know the Diamante name will buy because it’s Diamante,” says Wong, noting the builder’s reputation for quality and craftsmanship.

While the development is still in pre-sales, The Diamond has been generating buzz, especially among Asian brokers and buyers.

“Everyone in the community knows Yonge Street, and they love this area in particular,” Wong says. “Many Asians live around here. There are good high schools, and if their kids go to York University, this is where they want them to live. So Yonge Street sells itself.”

Just in case, Steele points out that The Diamond is one of the only projects currently on sale in this part of the city. “Anything else in the pipeline won’t be coming up for at least another year,” she says. “So if you want to buy North York, now is the time, and this is the place.”