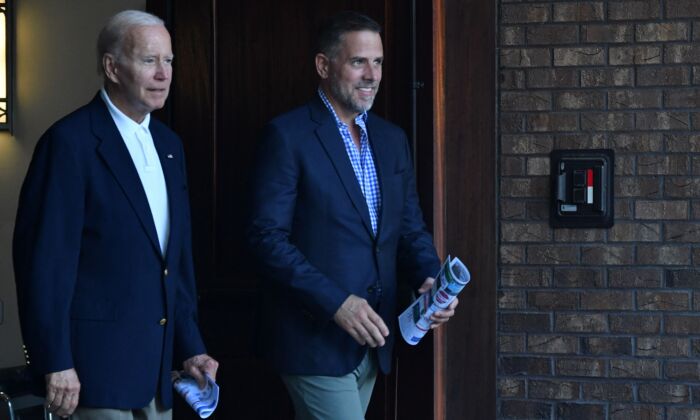 President Joe Biden’s “Document-gate” scandal has been consuming U.S. legacy media and political punditry since it was first disclosed on Jan. 9 that Biden’s lawyers “found” classified documents at the Penn Biden Center for Diplomacy and Global Engagement in Washington.

A subsequent discovery of additional classified documents at his home in Wilmington, Delaware, morphed the scandal’s title to “Corvette-gate,” as the documents were found where Biden’s 1967 Corvette was garaged.

As usual, the legacy media have focused on the political aspects of the scandal, that is, how the in-process investigation and disclosures will affect the political future of the occupant of the Oval Office. How and when did the documents get there? Why were the classified documents found there outside of the knowledge of the National Archives and Records Administration? Why did Biden’s lawyers find them? Why did it take two months to publicly disclose the finding of those classified documents? Is there a political motive behind the disclosures now (conspiracy theories abound)? Why was former President Donald Trump’s home raided by the FBI while no raid was conducted on either of the Biden Center locations or Biden’s several residences? How will the scandal affect Biden’s political future?

What isn’t being discussed by the media are the details of the contents of the documents themselves and the specific obligations of everyone who handles classified information. Few people understand the Byzantine document classification system, the requirements for safeguarding classified documents, and the penalties for mishandling them. Media outlets do us a disservice by not providing clarity on the less-interesting mechanics of the document mishandling but instead focusing on the sexier political implications of the scandal.

Let’s examine the issue in detail.

Biden left the White House in January 2017 after his vice-presidential term expired. He maintained an office at the University of Pennsylvania for several years after that. He joined its faculty as the “Benjamin Franklin Presidential Practice Professor.” He was paid more than $775,000 over the next two years to “expand Penn’s ‘global outreach’ and ‘share his wisdom and insights with thousands of Penn students through seminars, talks and classroom visits,’” as reported by Philadelphia magazine in 2019. But he never set foot in class.

As mentioned above, the first tranche of documents was found in the Washington offices of the Penn Biden Center, a think tank located about a mile from the White House. As noted by the New York Post, “CNN reported … that 10 documents dated between 2013 and 2016 have classified markings, with some designated as ‘Top Secret’—the highest level of classification—or as containing ‘sensitive compartmented information,’ meaning the highly secret information was obtained from intelligence sources.”

Biden claims that he first learned about the presence of the classified documents when his lawyer reported them to the White House counsel’s office on Nov. 2, 2022. Interestingly, the Washington office was opened in February 2018. Where were those documents stored from January 2017 to February 2018?

U.S. Attorney General Merrick Garland assigned U.S. Attorney for the Northern District of Illinois John Lausch to find out how the classified material ended up at the Penn Biden Center.

A search of Biden’s homes in Wilmington and Rehoboth Beach, Delaware, was subsequently conducted. Additional classified documents were discovered in the garage of Biden’s residence in Wilmington. One document was a single page that was found in an adjacent room.

The political implications are thus juicy and profound. But what about the mechanics of the mishandling of the documents themselves?

Information is classified based on the level of damage to national security if disclosed (Top Secret–exceptionally grave damage; Secret—serious damage; Confidential—damage). Higher levels of Top Secret classification exist: SCI and Special Access Program (SAP). SCI is derived from intelligence sources and methods and must be handled very carefully with higher security protection requirements and very limited personnel access. SAP requires even stronger and more extraordinary protection measures (physical, information, personnel). The bottom line is that Top Secret/SCI and Top Secret/SAP information is the most carefully guarded national security and intelligence information produced and safeguarded in the United States.

Before a person can be granted access to any classified information, three actions must be completed: a favorable determination of eligibility (a comprehensive background investigation completed), a “need-to-know” (a valid requirement for access to the information), and a signed non-disclosure agreement (NDA).

These are the penalties for violating Title 18 USC-Espionage: a $10,000 fine for each offense, up to life imprisonment without parole, or the death penalty in certain circumstances. The NDA also identifies explicitly the regulations that govern classified information, including unauthorized disclosure: Sections 793, 794, 790, and 952 of Title 18 USC; Section 783(b) of Title 60 USC; and EO 12356. These statutes have their own penalties for violations thereunder.

On Jan. 12, as reported by the Daily Wire, Garland appointed Robert Hur as a special counsel to “investigate the possible unauthorized removal and retention of classified documents or other records discovered.” Interestingly, Hur was the U.S. attorney who requested that the justification of an FBI raid on Clinton Foundation whistleblower Dennis Cain’s home remain secret in 2018 (which hid the likely political motivations for the raid), according to the Daily Caller. And Hur was also directly involved with Russian hoaxer Christopher Steele, according to Breitbart. Can Hur be objective, given these political biases?

Hur’s main task at hand is to inventory and determine whether the classified documents have been compromised, without regard to the potential political fallout. In parallel, he must determine the chain of custody of those documents from the moment they left proper White House SCIF storage to when they were first discovered on Nov. 2, 2022. At the top of that chain of custody is the person who authorized the release of the SCI documents to Biden (or his operatives) as he left the White House in 2017. Everyone involved in the chain of custody from then on to the date of their discovery at the Penn Center in Washington has committed one or more felonies under federal statutes.

Will there be any indictments, or will the politics obfuscate and prevent the enforcement of the statutes? Time will tell.