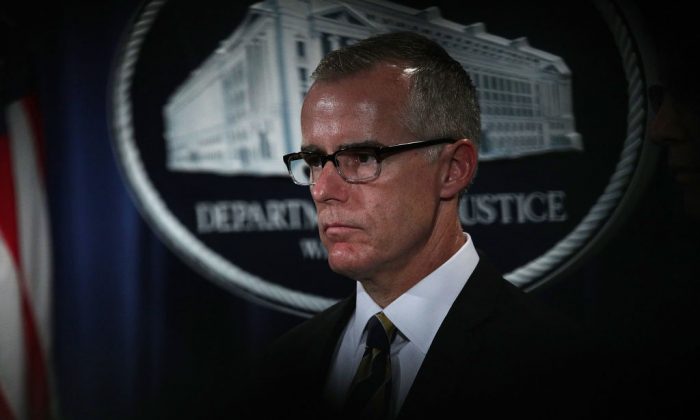 OPINION: The Den of Thieves and Lowlifes

On the day the Department of Justice (DOJ) released its damning report on former FBI deputy director Andrew McCabe, President Donald Trump wrote in a tweet: “No collusion, all made up by this den of thieves and lowlifes!” The “den of thieves and lowlifes” apparently referred to the schemers in the DOJ and FBI under President Barack Obama, including McCabe and James Comey, the fired director of the FBI.

McCabe leaked or authorized a subordinate to leak to the media about an ongoing investigation and lied about it, not once, but four times, to DOJ investigators.

Comey wrote seven memos about his conversations with Trump, of which four were considered classified. He leaked at least one memo to the media via a friend, who was an FBI employee. McCabe, and Comey and his friend, are the bona fide “thieves and lowlifes” in the FBI. They should be prosecuted to the fullest extent of the law.

This also begs the question: Were the DOJ and FBI the only “den of thieves and lowlifes” under the Obama administration?

The answer is definitively no. The director of national intelligence under Obama, James Clapper, just joined the ranks of leakers and liars found among senior Obama officials, according to a declassified report authored by the House intelligence committee.

One of the major findings of the report is that, without authorization, Clapper disclosed details to CNN’s Jake Tapper about a briefing to Obama and then-president elect Trump regarding the Steele dossier. But when Clapper testified before the House intelligence committee in July 2017, he “flatly denied” discussing the dossier or any other intelligence related to the Russia probe with journalists.

Probably realizing he just perjured himself, Clapper then came clean and acknowledged he leaked information about the briefing to Tapper and possibly some other journalists, according to the report.

Clapper’s leak to CNN was significant because it provided the excuse for some media outlets to publish the dossier, the report says. Media organizations like CNN had the dossier in late 2016, but were afraid to run it due to its salacious and unverified nature.

Tapper wrote an article about the briefing and the dossier, based on Clapper’s leak, on Jan. 10, 2017. A few hours later, Buzzfeed posted the full text of the dossier.

One day after the dossier went public, Clapper put out a statement saying the intelligence community “stands ready to serve his administration,” meaning the Trump administration. He also said, “I expressed my profound dismay [to Trump] at the leaks that have been appearing in the press, and we both agreed that they are extremely corrosive and damaging to our national security.” Being the leaker himself, two-faced Clapper took perfidy and political chicanery to a whole new level.

Some say that in elite political circles, double-dealing and backstabbing are the norm, so what Clapper did is not too surprising. But that fact that there seem to be so many McCabes, Comeys, and Clappers in the Obama administration is still amazing. As the House intelligence committee continues to expose more weasels, the interesting question is “Who will be next?”