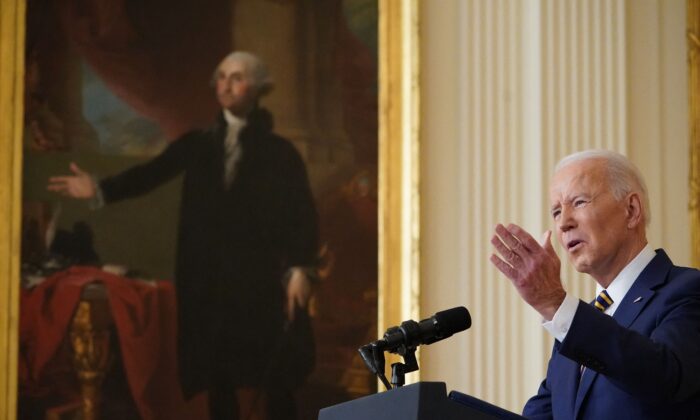 U.S. President Joe Biden holds a rare press conference in the East Room of the White House to kick off his second year in office, on Jan. 19, 2022. (Mandel Ngan/Getty Images)
Viewpoints

Will the marathon Biden press conference on Jan. 19—the day before the first anniversary of the president’s inauguration—someday be seen as a watershed, not only in the fortunes of his administration but in those of the new American revolution of which he’s now the increasingly implausible figurehead?

Of course, it’s too early to tell, as such things are often clear only years later. But there are a few early warning signs that the revolution, which began with the so-called “Resistance” to President Donald Trump, may finally be faltering.

Chief among these signs is the leader’s announcement to his demoralized Democratic and media troops, nervous as they must be about his and their precipitous slide in the public opinion polls, that everything in the revolutionary garden is just lovely.

He also said his legislative accomplishments have been “better than any president has ever gotten in the first year.”

He also said this: “Look, I didn’t overpromise, but I have probably outperformed what anybody thought would happen.”

And this: “Am I satisfied with the way in which we have dealt with COVID and all the things that—that go along with it? Yeah, I am satisfied. I think we’ve done remarkably well.”

And he repeated: “The fact of the matter is that we’re in a situation where we have made enormous progress.”

An interesting but not untypical definition of “fact” there. Factually, there’s quite a lot of evidence that a majority of people in the country don’t agree with any of these opinions about his performance in office.

And all this without mentioning his suggestion during the same press conference that a “minor incursion” of Russian troops into Ukraine would be no big deal to him or to his administration.

Even the most loyal Democrats—even the media, who often seem to be the most loyal of them all—must have been taken aback. Here’s how I imagine their minds working at the one-year mark of the institutionalized revolution they still, apparently, believe in.

“We’ve all grown so used to Mr. Biden’s fanciful takes on his own heroic career that we hardly notice them anymore. We may raise an eyebrow at such extraordinary statements as the one about the ‘enormous success’ of his withdrawal from Afghanistan, or the one about how his multitrillion-dollar Build Back Better legislation would actually cost ‘zero.’ But then we set about cleaning up on his behalf after such gaffes. That’s just Joe being Joe.

“We’ve even accepted, with only a little grumbling, the characterization of Republican attempts to prevent electoral fraud as ‘Jim Crow 2.0’ and of those who disagree with his own proposed election reforms as indistinguishable from George Wallace, Bull Connor, or Jefferson Davis.

“Those of us with long memories may still be laughing about how, way back in 2012, he told a largely black audience that Mitt Romney was intending ‘to put y’all back in chains.’

“Before, we thought he was just playing the game of postmodern politics the way Democrats have played it since at least 1996, when Bill Clinton announced that ‘the era of big government is over.’ Yeah, the rubes will eat that stuff up, so that’s what we give them, and all the while, we’re planning something—different.

“But now—whisper it softly—the president of the United States isn’t just tossing off mendacious crowd-pleasers as usual. Now he’s being (gasp!) sincere. Now he really believes it.”

The word such people are groping for, I think, is “delusional”—with all that that implies about failing mental faculties.

Of course, none of them will pronounce the word out loud—any more than they will make public the thought processes outlined above. But they might just start talking about the need for a “reset” or a “reboot” of the administration, or its adoption of new “communication strategies,” as they were doing even before the press conference, or proposing a “course correction.”

They might even, as the editorialists at The Tampa Bay Times did on Jan. 22, though admittedly only in a Floridian context, confess that the Democratic Party “has seemed incapable of unifying or appearing competent enough to govern.”

What they’re not doing, at least not yet, is admitting even to themselves that good old Joe just isn’t up to the job anymore, if he ever was.

John Harris, the founding editor of Politico, even finds hope in a further indication of Biden’s new and dangerous sincerity—as when he applied to a Fox News reporter what was once thought to be an indecent epithet.

“As a political communicator,” Harris writes, “President Joe Biden’s most effective moments often come spontaneously, when he is overcome with feeling, or by accident, when words that are intended to be private instead become public.”

Thus, his saying the quiet part out loud is, to Harris, not a sign of senility but a “lapse of presidential decorum [that] hints at a path toward restoring presidential vitality.”

Now, where have I heard about lapses of presidential decorum in recent years?

When the president’s cheerleaders start suggesting, however obliquely, that he should be more like Trump, you know it’s not just he who’s in trouble.

I seem to remember an old saying about how the only way to get the attention of a donkey is with a two-by-four between the eyes, but the Democratic donkey is now apparently too far gone to respond even to such stimulus as that.

No, I fear the revolutionary train, like Biden’s administration, is still on the rails, still heading for its inevitable crash into reality, whether that happens through its success or its failure, and is unlikely to be shunted onto a siding and out of danger to everybody else, as well as itself, anytime soon.