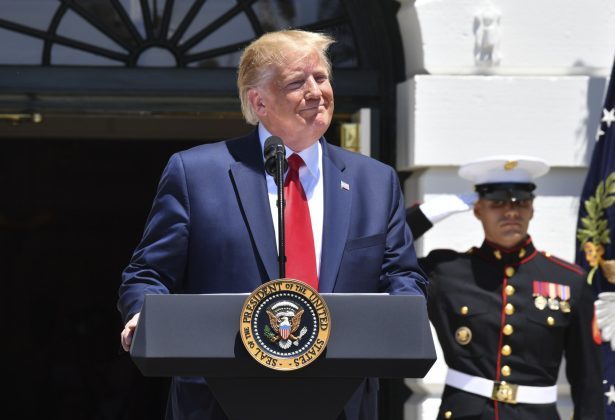 What an awesome month July has been for President Donald Trump.

First, Trump was riding high into July, having pulled off a historic visit to North Korea, which was quickly followed by the stunning Fourth of July Parade in Washington DC. Trump then adroitly navigated a way to accurately count the number of illegal immigrants living inside the United States by using federal records. Then a dumb attempt in the House of Representatives to start impeachment proceedings against the President went down spectacularly in flames.  And now a big bipartisan budget deal has just been announced.

Trump’s poll numbers keep rising. The economy continues to boom, and of course Trump wastes no opportunity to brag about it.

As I like to say, this is not how the script for 2019 was supposed to go according to the political elite class who thought they were writing it. These elites fully expected a besieged Trump to be well on his way out the door of the White House by this point. Instead, Trump appears to be growing stronger, not weaker.

This same month of July has been most unkind to the President’s political opponents.

The freshman Democrat House Representatives, whom I have dubbed “The Mad Squad” (comprised of  Alexandria Ocasio-Cortez (D-N.Y.), Rashida Tlaib (D-Mich.), Ilhan Omar (D-Minn.), and Ayanna Pressley (D-Mass.) appear to now be firmly in control of the House. Maybe even in charge of the entire Democratic Party. And its all thanks to Donald Trump!

A week and a half ago it looked like a full-blown civil war was breaking out in the Democratic Party. Ocasio-Cortez felt comfortable enough in her new-found power as a DNC media darling to publicly hurl the accusation of “racism” at none other than her own House speaker, Nancy Pelosi (D-Calif.).

Conservatives like myself had started popping the popcorn, getting ready to watch months of vicious Democratic in-fighting… and then a miracle happened.

With just a couple of tweets from his Twitter account and a few off-the-cuff statements to reporters, President Trump actually got the entire Democratic party leadership to circle the wagons around “The Mad Squad” and defend them.

That was nothing short of amazing.

The First Democratic Debates Were a Disaster

After watching the two nights of the first Democratic debates in late June, longtime Democratic top donor and billionaire Tom Steyer suddenly announced on July 9 that he was jumping into the race himself, something that looked like a sheer panic move in such an already crowded field.

Given how badly the slate of 20+ candidates came across during those debates, Steyer’s panic is certainly understandable. Steyer and many top donors watched all the hundreds of millions they’d donated to put Hillary Clinton in the White House in 2016 go up in smoke.

There is a lot riding on the outcome of the 2020 election, and donors like Steyer simply can’t bear the thought of watching hundreds of millions more of their dollars wasted in a fruitless attempt to unseat Donald Trump.

The most memorable moment from both nights is an embarrassing one, where all the candidates on the stage raised their hands when asked if their health insurance plans would pay for the coverage of illegal immigrants.

The fundraising numbers of both the DNC & RNC for the month of June have been disclosed, and the RNC is way ahead with no debt at all, while Democrats are lagging far behind and have millions of dollars to pay off to get back into the black.

The rank extremism that Democrat lawmakers have engaged in over the past seven months since the new House was seated is taking its toll. Donors aren’t opening their wallets this time around, and it’s getting noticeable.

Another huge black eye for the Democratic Party was the absolute cratering of their initial attempt to put months of talk of impeaching the President into action, when a resolution to impeach Trump was defeated by a large margin in the Democrat-controlled House.

The final vote was 332 to 95, with 137 Democrats crossing the aisle to vote with 194 Republicans to defeat the resolution.  Only 95 Democrats in the House voted for impeachment to proceed, something that was a huge embarrassment to Rep. Al Green (D-Texas), who introduced the resolution.

Trump wasted no time celebrating, and tweeted within minutes of the resolution’s defeat:

The United States House of Representatives has just overwhelmingly voted to kill the Resolution on Impeachment, 332-95-1. This is perhaps the most ridiculous and time consuming project I have ever had to work on. Impeachment of your President, who has led the…. Greatest Economic BOOM in the history of our Country, the best job numbers, biggest tax reduction, rebuilt military and much more, is now OVER. This should never be allowed to happen to another President of the United States again!

It’ll probably be a while before the members of Congress all gung-ho to try to impeach the President try this again.

The SDNY Investigation Of Trump Org Ends With No Charges

After Robert Mueller ended his Special Counsel investigation without making any charges against the President or his inner circle for either collusion or obstruction, Democrats then began placing their fading hopes in the ongoing investigation into the Trump Organization by the Southern District of New York [SDNY].

Those hopes were dashed when the SDNY announced the end of its probe without filing any charges against either the President or any member of his team.

The weirdest thing about the whole SDNY case to me has always been the spectacle of former Trump lawyer Michael Cohen pleading guilty to something that wasn’t even a crime. Famous celebrities have been paying women making allegations against them to go away for decades and there’s nothing illegal about it. Trump was certainly doing this long before he ever ran for President.  Former FEC chairmen Hans Von Spakovsky and Bradley Smith patiently explained this over a year ago to media reporters, many of whom clearly didn’t accept what they were being told.

Thank goodness there were several leaks to the media from anonymous sources that were supposedly “familiar with the matter” that led to breathless stories about how SDNY prosecutors were closing in on the guilty Trump crime family at last!

Until suddenly they weren’t!

I’m sure I’m not the only one who has noticed that the same pattern keeps being repeated:

1] A politically motivated investigation gets started

2]  Anonymous leaks keep the audience on the edge of its seats as they are told investigators are closing in on Trump and his inner circle. Trump angrily tweeting about this “witch hunt” is taken to be just more evidence he knows he’s guilty and that he’s doomed.

3] Suddenly, just before the end, the leakers totally change their tune, and begin saying people should manage their expectations and maybe even prepare for something anti-climatic.

4] The investigation ends, and somehow Trump and his team escape yet again.

How many times are stupid reporters going to fall for this, I wonder?

After the lame impeachment vote failed in the House and SDNY laid an egg, all Democrats have to look forward to right now is former Special Counsel Robert Mueller testifying to the House Committees on Wednesday, July 24.  That’s tomorrow, as I write this.

Democrats are now in the position of having to vainly hope that somehow Mueller drops some kind of bombshell in his testimony.

Well let’s all remember that Mueller is appearing as a hostile witness.  He is only there—if he shows up—because the committee subpoenaed him.  He’s not dropping any “bombshell” if he can help it.

House Judiciary Committee Chair Jerry Nadler (D-N.Y.) is out giving interviews in which he’s waxing rhapsodic about all the evidence Mueller’s report supposedly contains that proves Trump committed “many crimes.”

My prediction is that this Mueller testimony, if it indeed occurs, is going to be an even bigger letdown than that fiasco two years ago when fired FBI Director James Comey was supposed to testify that he’d never told Trump he wasn’t under investigation by the FBI even once, much less three times.  Remember how that turned out?

Once Mueller disappoints, as he invariably will, Nadler and Adam Schiff (D-Calif.) will be back to pointing desperately at their empty clenched fists while barking loudly about all the “evidence” they have proving Trump’s crimes and threatening to start impeachment hearings.

Somehow, and maybe it’s just me,  I don’t think Trump is all that worried at this point.