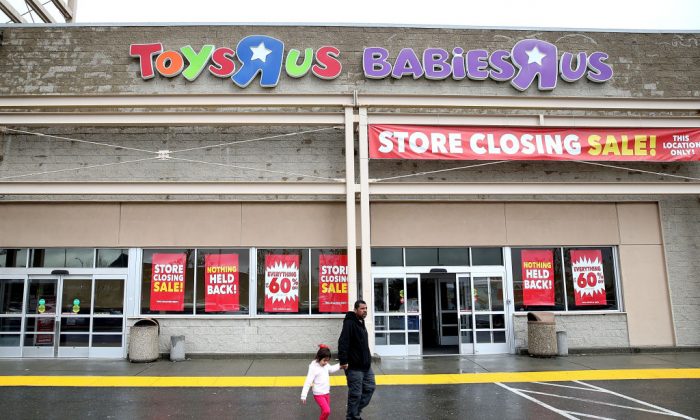 Customers leave a Toys R Us store on March 15, in Emeryville, Calif.. Toys R Us filed for liquidation in a U.S. Bankruptcy court and plans to close 735 stores leaving 33,000 workers without employment. (Justin Sullivan/Getty Images)
Companies

The Demise of Toys ‘R’ Us

How Wall Street, Amazon, and consumers sealed the fate of Geoffrey the Giraffe
biggersmaller
Print

The bankruptcy of toy retail chain Toys “R” Us was inevitable.

Yet that fact does not make the current saga any less sad or compelling. Toys “R” Us stores around the country are plastered with “Everything Must Go” signs, a bleak reminder that even one of the most iconic brands can one day disappear.

Toys “R” Us sought bankruptcy protection in September 2017, and last month, it declared plans to wind down and liquidate its U.S. business after a failed restructuring.

There are efforts to save the stores; potential buyers are lining up for portions of the company’s assets. There is hope that some form of the chain can continue to operate with a leaner store footprint. There’s even a GoFundMe campaign started by nostalgic donors to salvage the store that was no doubt part of many fond childhood memories.

On the face of it, Toys “R” Us wasn’t supposed to suffer this tragic fate. It was backed by reputable private equity firms in a low interest-rate environment, had access to clever financial engineering moves, owned a storied brand, and operated in a retail niche that shouldn’t be easily replaced by online shopping. After all, anyone who’s ever been a child can attest that browsing pictures of toys on the web is a far cry from walking through the aisles of a toy store.

Toys “R” Us’s collapse is also an announcement that the post-financial crisis status quo is over. By the time of its bankruptcy, Toys “R” Us was a zombie firm laden with debt and bleeding market share to the likes of Walmart and Amazon.

The lending environment has changed, and the retail landscape has shifted. Toys “R” Us simply couldn’t escape its spiraling debt, didn’t have the resources to invest in new businesses, and simply ran out of time.

In the near future, the failure of Toys “R” Us will serve as a case study for business school students.

The company was taken private at the height of the leveraged buyout boom right before the last financial crisis. In 2005, Kohlberg Kravis Roberts, Bain Capital, and Vornado Realty Trust led a consortium to buy Toys “R” Us for $7.5 billion. The companies injected over $1 billion in equity and financed the rest of the transaction with debt charged to the company.

In the decade after the buyout, the company acquired assets of defunct specialty retailer FAO Schwarz, experienced stiff competition from big-box stores Walmart and Target, and saw increased challenge from online retailer Amazon.

One giant misstep foreshadowed future woes for the company. In 2000, Toys “R” Us signed a 10-year agreement with Amazon to hire the online retailer as its exclusive e-commerce distributor. Toys “R” Us paid Amazon $50 million a year and a cut of its sales, and any customer who visited ToysRUs.com would be redirected to Amazon’s website.

That fateful decision to outsource its online operations planted seeds for its future downfall. Toys “R” Us never had an independent online presence, and Amazon—which saw how profitable selling toys online was—slowly built up its own online toy storefront.

By the time that partnership ended, brick-and-mortar sales were in the doldrums, and Amazon ditched Toys “R” Us to become the dominant online toy retailer.

But wait, there’s more: The secular shift of consumer tastes away from traditional toys and a corresponding rise of iPads, iPhones, and mobile gaming also eroded Toys “R” Us’s core business. While the company did pivot toward selling electronics and video games, having to compete in another retail sector was simply too much for Toys “R” Us to manage.

Toys “R” Us was too hamstrung. The company had $400 million in annual debt interest costs as a result of its leveraged buyout. It simply didn’t have the cash to invest in online and retail infrastructure to form a defense.

With declining profits, the company couldn’t get out of debt. It obtained new debt to roll existing obligations—the high-yield debt market was booming for a large part of the last decade—and went through several financial restructures to extend its lifeline, including selling assets, selling real estate, and swapping debt for equity.

But time wasn’t on Toys “R” Us’s side. Last summer, rumors of the retail industry’s demise were rampant, and banks weren’t willing to risk more. The company filed for bankruptcy protection in September, with $5 billion in liabilities.

The timing of Toys “R” Us’s bankruptcy was also unfortunate. Its September announcement was right before the critical holiday shopping season, which served as a huge distraction for company staff and took valuable resources away from planning and executing the company’s holiday sales strategy.

In addition, bankruptcy spooked both customers and suppliers. A portion of any retailer’s holiday sales is in the form of gift cards, and some customers were unwilling to buy gift cards at a store that may soon disappear.

Suppliers and vendors were also concerned. As the bankruptcy proceeded, vendors were worried that the company couldn’t make good on its payments. Toys “R” Us said that it faced certain “delays and disruptions” to its supply chain during the holiday shopping season as a result, in a March court filing laying out its plans to liquidate stores.

Its competitors also smelled blood in the water. Amazon, Target, and Walmart increased discounts and promotions, selling toys at “low margins or as loss-leaders,” which Toys “R” Us “could not compete” with, the company said in the same filing.

Following a disastrous 2017 holiday shopping season that was “well below worst-case projections,” the company decided in March to wind down its U.S. businesses and liquidate all 735 of its U.S. stores.

Toys “R” Us’s collapse will be a blow to the entire toy industry. The company wasn’t simply a big retailer; it was a testing ground for new toys and promotions from toy makers.

Since Feb. 15, when rumors swirled that Toys “R” Us may liquidate, stocks of the two biggest toymakers have fallen drastically. Shares of Hasbro Inc. declined 9.9 percent between Feb. 15 and April 13, while shares of Mattel Inc. fell 13.7 percent during the same period.

Without Toys “R” Us as a physical storefront to showcase new products, toy makers will need to turn to specialty retailers, big-box retailers, or build out their own retail presence going forward.