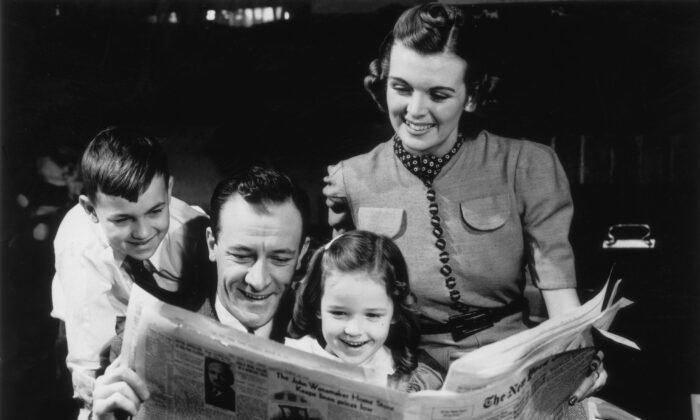 A family gathers around the newspaper for a good laugh, circa 1935. (FPG/Hulton Archive/Getty Images)
Viewpoints

The Demise of the Nuclear Family Has Marxist Roots

These words were uttered by the author Leslie Wolfe way back in 2001. Fast forward two decades and Wolfe’s Nostradamus-like predictions appear to be eerily accurate. The idea of the illegitimate child is vanishing because the concept of the traditional family is disappearing—and with that, an integral part of American tradition.

Fewer and fewer women are giving birth. Right now, Americans’ total fertility rate is in the red. In other words, the country’s citizens aren’t having enough babies to replace themselves. According to researchers for the Centers for Disease Control and Prevention, the current birth rate is far too low—16 percent below the required number, to be specific.

As the author Lyman Stone asked last year, “If fertility rates had remained at their 2008 levels (the last time we had replacement-rate fertility in America), how many more babies would have been born?”

The answer, he suggested, “is 5.8 million babies.” That’s an entire Wisconsin.

The term is closely associated with the nuclear family, otherwise known as the traditional family unit, which includes a mother figure who acts, first and foremost, as a caretaker of the family; a father figure whose primary role involves provisioning and protecting; and the child (or children).

Nuclear families have formed the bedrock of modern society. As scholarly research has shown, a successful nuclear family provides children with the tools needed to thrive in life. Children with two consistent parents, available both physically and emotionally, are more likely to socialize successfully, earn good grades in school, and involve themselves in extracurricular activities. They tend to have better social, emotional, and physical health than children without married parents.

Nevertheless, a pernicious idea—one that involves the supposed dangers of the nuclear family—is gaining steam. Some prominent authors have argued that the nuclear family was a gigantic error, an unfortunate mistake. Sadly, either consciously or otherwise, an increasing number of people appear to agree with such sentiments.

Across the United States, the nuclear family is very much in decline. Half a century ago, 42 percent of American families were nuclear; today, that figure has dropped to just 22 percent. At this rate, a few decades from now, one wonders if the nuclear family will even exist.

When it comes to the alleged dangers of the nuclear family, it helps to ask the following: Where did such harmful ideas come from?

In his “The Communist Manifesto,” Karl Marx famously argued that women were systematically oppressed by the ruling class. Marriage, he argued, only served to strengthen the power held by men and further diminish the position of women in society.

However, his close friend and compatriot, Friedrich Engels, really attacked the idea of marriage and the nuclear family. According to Engels, they were both capitalist constructs. In his book “The Origin of the Family, Private Property and the State,” Engels identified the primary cause of women’s oppression: the nuclear family construct. He argued that the idea of the traditional family was inextricably linked with the capitalist agenda. To defeat capitalism, the construct must be deconstructed, demolished, and dealt the deadliest of blows.

Engels’s philosophies played a prominent role in the rise of socialist feminism, a movement and ideology that came to prominence in the 1960s and 1970s. At this time in the United States and beyond, ideas about abolishing the nuclear family made their way into academia, revolutionizing both gender and family studies. This, in turn, changed the way graduates viewed (and still view) the likes of marriage and the nuclear family. Socialist feminists have for years claimed that the nuclear family is an instrument used by the patriarchy, an idea initially put forward by both Engels and Marx.

Thus, the decline of family values has Marxist roots. It’s ironic that communism, which called for the masses to unite, has proved to be instrumental in attacking the highest form of unity: marriage.

And this attack has proven to be deadly.

According to a report issued by U.S. Congress, researchers “have well established that children raised by married parents do better on a wide array of outcomes.” In addition to having “stronger relationships with their parents, particularly with their fathers,” these children “are also much less likely to experience physical, emotional or sexual abuse.”

Moreover, “they have better health, exhibit less aggression, are less likely to engage in delinquent behavior, have greater educational achievement, and earn more as adults.”

Today, fewer and fewer children are raised by married parents. In fact, according to the Pew Research Center, the United States has the world’s highest rate of children living in single-parent households.

As the nuclear family continues to lose its appeal, we must ask, what comes next?

After all, if you’re going to tear down something that served previous generations so well, you better have something better to replace it. There’s a reason why so many once favored the nuclear family—it’s because it worked. For centuries, it worked as a sort of societal glue; now the glue is becoming unstuck. And when it does, society could fall apart.

As Michel Houellebecq once argued, complete barefaced individualism only triumphs when it undermines “intermediate structures such as nations, corporations, castes.” However, when it undermines “the ultimate social structure, the family, and thus the birth rate,” it effectively signs “its own death warrant.”