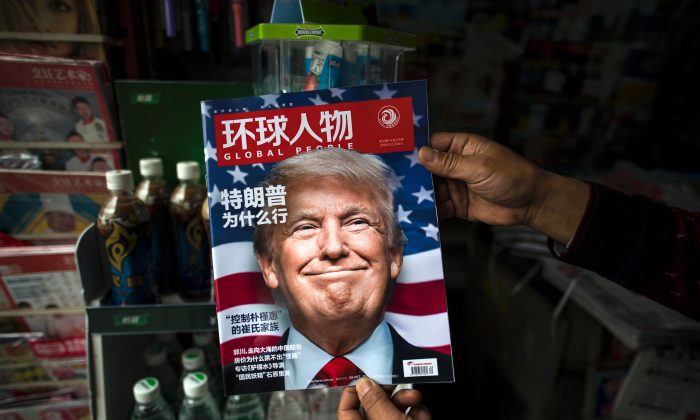 A copy of the local Chinese magazine Global People with a cover story that translates to 'Why did Trump win' at a news stand in Shanghai on November 14, 2016. (Johannes EiseleAFP/Getty Images)
China

The Decline of Economics and the Rise of Donald Trump

Chinese economist Ma Guangyuan contemplates what the U.S. election results tell us about the absence of ethics in today’s economics, particularly as it relates to China.

Trump shock is spreading around the world. Mainstream media in Europe and the United States reflect on why the polls and the election outcome were so vastly different. But it is clear that they haven’t gotten to the fundamental issue.

Society is changing. Economics is also developing at a rapid pace. However, with each major economic crisis, economists were unable to predict their arrival beforehand, propose effective measures for how to handle them, or prevent the social rifts that occurred during the crisis.

Since the 2008 financial crisis, monetary easing and fiscal stimulus haven’t been able to cure the economic damage, but caused even bigger gaps between social classes. The fundamental reason is that while the economy keeps moving ahead on a technical level, the foundation of the economy and society remain stagnant.

The gist of early economics was to study the ultimate mission of the state and the individual. Adam Smith, the founder of economics, was a professor of philosophy and ethics. Smith never taught any economics courses in his lifetime. When he raised the concept of the “invisible hand,” he paid more attention to the moral factors behind the market. He believed that the market is moral because everyone promotes the progress and development of social interests in the pursuit of their own interests.

Keynes, the founder of macroeconomics, argued that economics, in essence, is about ethics, a science of morality. Past renowned economists all took human development, moral progress, and the fate of the vulnerable in society as their missions. Later on, research tools in economics became more and more dazzling, their scope more and more extensive, and the models became more and more complex, but further and further away from morality and ethics. The study of “maximization” as the main mode of thought has degenerated economics into a robot-like efficiency.

Economics became nothing more than empty efficiency analysis. It lost the strong emphasis on humanistic thought. With efficiency as the ultimate goal, it is impossible for economics to take into account the needs of vulnerable groups or how to address issues of fairness and justice.

During the last financial crisis, the biggest negative effect of the loose monetary policy was that it worsened the pattern of wealth distribution. In the global economic rebalancing process, a large amount of money was released into the capital markets, real estate and other markets, creating an asset price bubble.

The affluent class resolved the crisis of wealth reduction through a money bubble. Thus, the wealthy were not only unharmed, they became wealthier due to asset price increases. However, the middle and low income groups had to pay for the money released by the central bank by way of a reduction of the real economy. Their incomes shrank.

This happened around the world, including in China. Since 2008, China released a large amount of stimulus, creating asset price bubbles, especially the real estate bubble. With stagnation of the real economy and manufacturing, real estate has experienced large government-led price surges and become the best investment choice for the affluent. In some cities, real estate ownership is now considered a symbol of wealth and social status instead of a means to provide housing.

China’s major cities are gradually forming two opposing classes: the class with real estate, and the class without. The landed class gladly makes uses of the real estate bubble, while the class without can only let out a sigh. Housing has become an obstacle to social vitality and equality in China. In the process of coping with the 2008 crisis, real estate also became a financial resource for local governments. All this has affected the morale of society.

In the book Capital in the Twenty‑First Century, French economist Thomas Piketty explored the economic roots of human inequality. It triggered a huge response around the world. Piketty’s research suggests that capital gains outweighing labor income is the main reason for the gap between rich and poor.

We can find ample proof for this in China. From 1997 to 2007, the proportion of labor remuneration to GDP fell from 53.4 percent ​​to 39.74 percent. However, the share of capital income continued to rise, and the proportion of enterprises’ operating surplus to GDP rose from 21.23 percent to 31.29 percent. China has one of the most unfair income distributions in the world.

Public policy in China should not only focus on growth and efficiency, but also on fairness and wealth distribution. I have always felt that China is constantly wasting time to reform income distribution. We should be aware that the reason why China’s economic transformation is so difficult to achieve lies in the imbalance of income distribution. Reforms benefits fewer and fewer people through abnormal channels, hence squeezing the spending power of the vast majority. This leads to further economic stagnation and loss of fairness and efficiency.

Trump’s victory tells us that a society with a huge wealth gap will bring serious uncertainty. The field of economics needs to return to include ethics and fairness, or else Trump’s “accidental” triumph will become a predictable certainty.

This is an abridged translation of Ma Guangyuan’s Chinese article posted to his public WeChat account. Ma Guangyuan is an well-known independent economist in China. Ma appears as a financial commentator on China Central Television, and his columns have been published in Financial Times Chinese, Southern Weekly, and elsewhere.