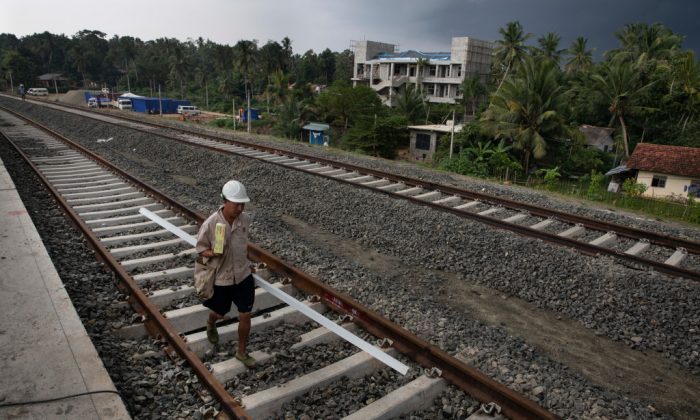 The Debt Trap of One Belt, One Road: The Price of Following China

Countries that abandoned Beijing after the initial “One Belt, One Road” (OBOR) summit in 2017 have re-congregated under the Chinese flag in mutual support of its second summit event.

This includes new member Switzerland, as well as Malaysia and Myanmar, which previously complained to the United States and the International Monetary Fund (IMF) that investing in China caused them to fall into a “debt trap.”

Compared with the first summit in May 2017, the second summit has several points of attraction.

First, countries have adjusted their expectations of the Chinese Communist Party (CCP). Although there is a general expectation for large amounts of CCP funding, the estimates are far more realistic than the 2017 target.

During the first summit in 2017, China’s foreign exchange reserves were falling sharply, and on May 4, Zhou Xiaochuan, governor of the People’s Bank of China, published an article in a Chinese financial magazine.

The main points were: investment and financial cooperation for OBOR isn’t unilateral financial support, but requires all parties to jointly build a common-interest community to share the expenditures, risks, and benefits. At the same time, emphasis must be placed on market-based financing and active use of the Chinese yuan to generate more in local savings and international capital.

To put it bluntly, China said that future investment should make the Chinese yuan the main source of capital and OBOR partners should make joint investments. That was disappointing to countries that came with hopes of seeking the support of the U.S. dollar. That sparked a 2017 international incident: OBOR countries called for an end to the Chinese project, claimed to the IMF that China had increased their debts, demanded that the IMF provide assistance, and finally, convinced the United States to support a narrative that OBOR created a “debt trap” for participating countries.

With these experiences, the expectations of participating countries for the second summit weren’t as high as the first, with many countries just testing the waters. The attitude of Italy is typical: as long as China has money, it’s fine.

The second summit also included a number of important new members. Two European countries, Italy and Switzerland, attended. Italy is the first G-7 member country to participate in the OBOR program, and the symbolism is self-evident.

Switzerland’s participation is even more important. An article published by the BBC a day before the summit has a clear understanding of this. First, Switzerland has the most prestigious financial services industry in the world; secondly, Switzerland is home to numerous international organizations. For China, Switzerland’s unique “neutral” political status is of paramount importance to OBOR. While Germany is dissatisfied with that, its problem with Italy isn’t so much in its participation. Rather, Germany insists on maintaining a position as a European leader, controlling the EU’s collective bargaining power.

Third, the Chinese government has been very tactical in placing its focus on economic cooperation, and has promised to be in line with international regulations. These statements have given participating countries very good reasons to cooperate.

China launched the “One Belt, One Road” initiative in 2013. According to Refinitiv, the total value of the project is $3.7 trillion, spanning dozens of countries in Asia, Europe, Africa, Oceania, and South America. At the first OBOR summit, China had a sense of expansion, propagating the Chinese model, and espousing that China will become the new leader of globalization. That raised alarm in some countries.

During the second summit, Beijing softened its tone and shifted its focus to resolving the doubts in various countries. For example, it proposed to conduct a joint study with the World Bank on environmental and social standards of OBOR. “Building a framework for debt sustainability analysis to prevent debt risk” was its explanation for concerns regarding OBOR’s transparency and ideology export.

Since October 2018, Malaysia and several other countries accused China of leading them into a “debt trap,” a criticism the United States shares. On Oct. 3, 2018, the U.S. Senate approved the Investments Leading to Development Act of 2018 (BUILD) by a vote of 93-6. Under the measure, the original Overseas Private Investment Corporation (OPIC) and other development aid agencies will be integrated to form a new U.S. International Development Finance Corp.

The new agency, which is to receive $60 billion in funding, is responsible for providing assistance loans to developing countries for infrastructure projects, such as energy, ports, and water supply.

However, when it comes to using state resources, democratic countries are a lot more restricted and far less efficient than authoritarian states such China (efficiency that’s due to a disregard for people’s livelihoods).

Therefore, U.S. investment is only part of a plan, but China has actually put in real money. Countries all over the world are now facing a common problem; domestic unemployment.

Amid opposition from the EU’s major powers, Italy chose to cooperate with China unilaterally, an attitude based on realistic considerations: “From the windowsill of one’s home, this (China’s construction in the Italian port of Vado Ligure) is certainly not beautiful scenery, but it can bring jobs. So it is a good thing.”

For Vado Ligure, a town with a population of 8,000, Chinese investment has brought about 400 jobs, which has pleased both the local government and its residents. The mayor told Deutsche Welle that a strong investment partner is able to bring new opportunities and new capital.

At the same time, under the control of a series of treaties, contracts, and regulations, there is no need to worry that Chinese capital will cause issues of debt or labor rights violations. “The Chinese are not a problem. They bring money, and are greatly welcomed,” the mayor said. It’s the same principle for Croatia, Nigeria, and other countries. Money is the most important link for China in maintaining relations with countries.

Two years ago, Sri Lanka, due to an inability to repay Chinese loans related to the construction of the port of Hambantota, leased the entire port to China for a period of 99 years. This incident has been criticized as a classic case of the OBOR debt trap, and it appears that countries seem to have forgotten the market principle of debt repayment. Actually digging back, this kind of thinking has its roots.

Western media is left-leaning and has always placed a priority on value systems. The importance of the economy, and especially the role of the United States in the world economy has always been a little underemphasized. However, after Democrats won the majority in the House of Representatives in the 2018 midterm elections, socialist policies have become the preference of the Democratic Party, moving farther from the main topic of concern for U.S. voters.

I thus wish to use this opportunity to remind left-wing politicians around the world that only by “playing economics” can they win voters. In fact, this truth applies not only to the politics of all countries in the world, but also the reason why countries are rushing into China’s OBOR debt trap. Because only by obtaining China’s money can they have the capital to play economics at home and attract voters.

Originally, economic development was a country’s personal matter. But after World War II, the state of the Cold War between the United States and the Soviet Union caused other countries to become accustomed to a “following” approach: in addition to ideological reasons, each country (especially countries without very strong ideologies) could choose a side and receive financial assistance of a major economy.

Many small- and medium-sized countries have no methods for developing their economies, but made use of U.S.–Soviet contention to play political “seesaw.” They would stand on whichever side gave more benefits. The United States, since World War II, has assumed the public good of maintaining international order, believing it to be the embodiment of their own “soft power.” Other countries also take it for granted that this is the United States’ responsibility, and don’t feel a need to give thanks.

On the other hand, China is very aware of the power of money, and has been using it to wrestle relations within the United Nations. It has fully demonstrated the important influence money has on developing countries in human rights affairs.

According to the official statistics of the Chinese Communist Party, as of March 2019, China has signed different cooperation agreements with 125 countries. These countries account for 36 percent of the world’s GDP and 60 percent of the world’s total population. Are such strenuous efforts really just for winning business opportunities?

During the second OBOR summit, China did a lot of explanatory work to quell doubts of the outside world. Countries have accepted China’s explanations, believing that Beijing’s use of comprehensive transportation and infrastructure to bring the continents of Europe and Asia closer is beneficial to deepening trade and human contact.

But these countries understand the geostrategic significance of OBOR: the purpose is to establish a system with China as the core, causing countries to, in the process of cooperation with China, establish a high dependence on Beijing. Through the implementation of OBOR, China would have the right to formulate rules and regulations, and reshape the global structure.

Countries also understand that the United States has long expressed dissatisfaction with that plan. The U.S. strategic community generally believes that the CCP’s continued promotion of OBOR construction mustn’t be ignored. It not only has the potential to change the geo-economic and geopolitical balance of Eurasia, but also poses a real threat to the United States in fields such as technological standards, military security, and international development.

It even undermines the foundation of the global hegemony established by the United States since World War II. Therefore, the United States definitely won’t tolerate China’s strong challenges in this regard. The power struggle between the two superpowers will inevitably bring opportunities to many countries in the world seeking financial support.

As for the countries vying to jump into China’s “debt trap,” they are merely making a slight change to the new thinking of “depend on China for economic interests, depend on the United States for political security” formed by Asian countries post-Cold War, making a return to the Cold War-era seesaw model.

Situations such as that of mid-October 2018, when countries such as Malaysia cried out to the IMF and the United States, will inevitably reoccur, because complaining is also a way to sell the right to follow.