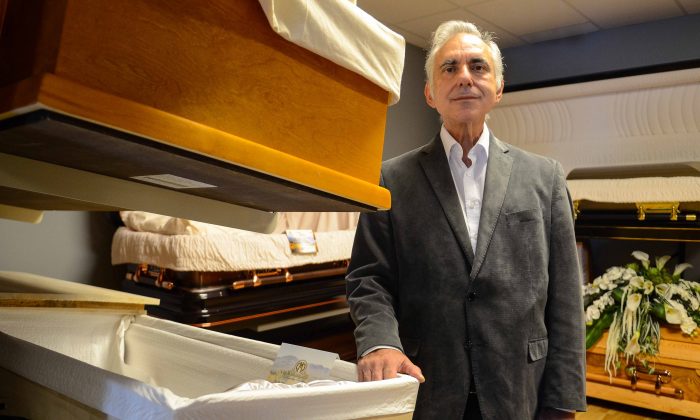 The only sure things in life are death and taxes, so the old adage goes. Funeral homes understand this fact well, and have been profiting from mortality since the early 1900s.

Over the last century, as the death care industry in North America moved from the domain of the family and church to the funeral home, it has become increasingly conglomerate-owned, profit-driven, and thus prone to exploiting families of the deceased at their most vulnerable time.

The tide may be turning, however, as non-profit funeral cooperatives appear to be gaining popularity across Canada, their modest prices slowly but radically changing the industry.

There are currently about 50 funeral co-ops in Canada, one in nearly every province. One of the oldest funeral co-ops was founded in Sudbury, Ont., in 1952, and the newest, British Columbia’s first co-op, opened just last month in Surrey. Quebec and Prince Edward Island have the most established, successful co-op models in the country, and have gained impressive market share—topping 75 percent or more in some regions.

Mark Goldblatt and a few friends opened Ottawa’s first funeral co-op a year ago. Goldblatt had worked in the co-op housing sector for years, and was inspired to get involved in funeral co-ops after seeing their success in Quebec and P.E.I. When Goldblatt had a negative experience with a private funeral home dealing with the death of his mother, he knew it was time for change in the industry.

“All [private] businesses are in business to make money for their owners, whereas in the case of our non-profit co-op we have no pressures like that—there’s no one to pay,” says Goldblatt, who estimates the cost of co-op funerals average 30-40 percent less than that of traditional funeral homes.

The Ottawa co-op operates out of a modest strip mall on St. Laurent Boulevard, and is co-owned by anyone who purchases a $20 lifetime membership. The showroom features reasonably priced urns and caskets rather than higher-priced luxury caskets that cost as much as a decent second-hand car.
Some of the cremation containers are simple chipboard boxes, instead of the more elaborate boxes sold by private funeral homes.

The average cost of a traditional funeral in Canada hovers around $7,000 to $10,000, including services at a funeral home, cemetery burial, and gravestone. Goldblatt says the most common complaint he hears about private funeral homes is their “up-selling” tactics and subtle suggestions that going cheap on a funeral is disrespecting the dead.

A majority of small family-owned funeral homes in Canada have been bought out by conglomerates such as U.S.-based giant Service Corporation International, which owns 1,800 funeral homes in North America, including in eight Canadian provinces.

Part of the buy-out deal is that the funeral homes can keep the family name and branding, creating the illusion that they remain humble mom-and-pop operations. Meanwhile, SCI’s charges are nearly double that of small, family-owned funeral homes, according to data compiled by Everest Funeral Package, a Houston-based funeral planning service.

Goldblatt says his co-op’s funeral prices are set just high enough to cover basic costs, and all profits are put back into the business. The co-op also saves money by renting available community buildings—chosen by the families—for visitations, religious, and memorial services and receptions. This allows the co-op to avoid the burden of maintaining and mortgaging a traditional funeral home, which drastically cuts overhead costs.

The market forecast for Goldblatt and other co-op operators appears promising. The first Quebec co-op, La Coopérative funéraire de l’Outaouais (CFO) was established in Gatineau in 1979 with 1,000 members and now handles 75 percent of all funerals in the Outaouais region. There are over 20 co-ops in Quebec today, consisting of more than 170,000 members.

In P.E.I., with a population of just over 145,000, there is a relatively large network of seven co-ops that have gained a 23 percent market share. In some of the small farming communities on the island, co-ops perform 100 percent of the funerals.

Josh Slocum is the executive director of the Funeral Consumers Alliance, a U.S.-based non-profit organization dedicated to protecting consumer’s rights when choosing a funeral. Slocum spoke at the international funeral co-op conference in Quebec City last year and was stunned by the strength of the movement in Canada, which is far more established than in the U.S.

“I was impressed by the number of funeral co-ops, and how refreshing it was to talk to people who believed, as I do, that funerals can be delivered at a fair price, with sensitivity not sales, and at a reasonable profit,” said Slocum.

“Certainly the structure – ownership by members, an elected board, member service not shareholders as a business goal – provides ways for much better pro-consumer oversight.”

Goldblatt admits it’s been a struggle to get the word out about co-op services in Ottawa, because families often use funeral providers “who they’ve always used” throughout the generations. The biggest driver of customers to his store is word of mouth, he says, after people have tried his services and realized it’s an affordable, tasteful option.

“We’re always mindful of our goal of providing people with quality services, but also at the most affordable price.”