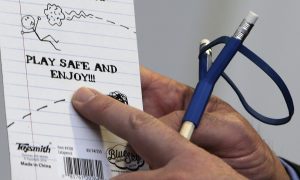 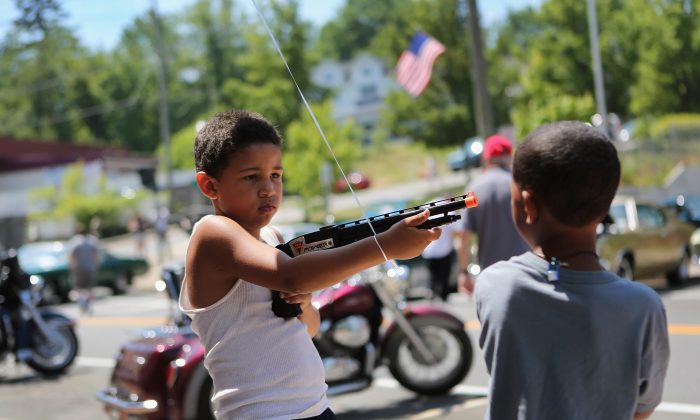 Children play with a toy gun during Fourth of July celebrations in Liberty, N.Y., in 2012. (John Moore/Getty Images)
US

When Cleveland, Ohio, police shot and killed 12-year-old Tamir Rice last November, after they mistook his toy pistol for a real one, the country reeled in shock.

In a surveillance video released by the Cleveland Police Department, officers are seen exiting their patrol car and then shooting the boy within two brief seconds.

But Rice’s story is not unique. Just two months earlier, at a Wal-Mart outside Dayton, Ohio, John Crawford III picked up a pellet rifle that was out of its package and sitting on the shelf. Police rushed into the store in response to a 911 call about a man with a gun. Seconds later, Crawford, 22, was shot and killed by the officers.

Comprehensive data is lacking on the number of police shootings in response to toy guns that were thought to be real.

State and federal legislation have long sought to curb such shootings from happening by requiring toy gun manufacturers to make their products more clearly distinguishable from real ones. But the effectiveness of such regulations has proven limited, as toys with striking resemblances to real weapon continue to be sold—or police fail to recognize the toy markings when making quick decisions.

In 1990, the Department of Justice’s research arm, the Bureau of Justice Statistics, conducted a survey asking law enforcement agencies across the country about police confrontations that stemmed from people with imitation guns.

There were 1,128 reported incidents between January 1985 and September 1989 where officers had warned or threatened to use force on someone with a toy gun. In 252 of the incidents, an officer used actual force (deadly or less than deadly), based on the belief that a toy gun was real.

The survey was commissioned by the U.S. Congress after it passed a law in 1988, requiring toy gun manufacturers to place orange tips in the barrel of toy guns as a way to distinguish them from real firearms.

In the case of Rice’s pellet gun, its orange tip was missing when police found him playing with it in a Cleveland park.

Some states have since placed additional regulations on toy guns, such as in New York state, where imitation guns are required to have nonremovable orange stripes running down both sides of the barrel. But in December 2014, the state Attorney General Eric Schneiderman found that several retailers sold toy guns that lacked such markings, such as Wal-Mart, Amazon.com, and Kmart. He wrote cease-and-desist letters to the companies to immediately stop the sale of such toy guns.

In September last year, California passed a law, called the Imitation Firearms Safety Act, requiring manufacturers to paint the toys’ entire surface with a bright color, or to include fluorescent strips on the gun.

But the law didn’t prevent another police shooting from happening. Last month, Los Angeles police shot and wounded a 15- year-old boy who was with a friend holding a toy gun in his hands. Except for the toy’s small orange tip at its barrel, the gun looked very much like a real firearm.

The Los Angeles Police Department said officers spotted a boy in an alleyway with a gun in his hand, and when the boy didn’t comply with orders to drop the weapon and turned toward them, one of the officers opened fire, according to a report by the Los Angeles Times.

The officer missed his target, but struck 15-year-old Jamar Nicholson.

Police Chief Charlie Beck defended the officer’s decision to shoot, and instead urged manufacturers to stop making life-like guns. “How about not configuring them to have the exact dimensions and machining as a real gun?” Beck told the Los Angeles Times.

In New York state since 1997, at least four people were killed and one child seriously wounded when police officers mistook their toy guns for real weapons, according to Attorney General Schneiderman’s office.

To prevent another mistaken shooting in Ohio, in January state lawmaker Alicia Reece introduced a bill modeled after California’s toy gun law. Reece pushed for the bill after Rice’s death.

But some questioned the bill’s effectiveness. Robert Sacco, president of the Ohio Rifle and Pistol Association, told local NBC affiliate television station WLWT that individuals can paint over or tape over the toys’ bright colors to make it appear real.

Sacco, who is also a 40-year veteran police officer, said a marked or colored gun won’t necessarily prevent an officer from mistakenly shooting a victim.

“When you’re in situations making split-second decisions about life and death, you have to err on the side of caution. The color of the particular weapon virtually means nothing,” Sacco told WLWT.