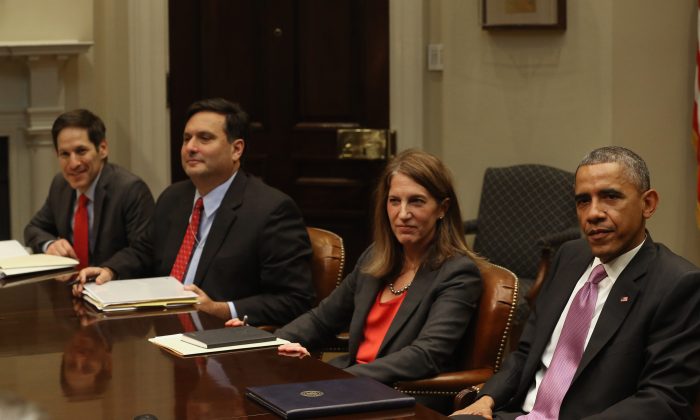 The Deadly Politicization of Ebola

The Ebola story gets stranger every day as administration officials, the CDC, and President Obama himself stretch logic and reason to the breaking point and beyond in an attempt to explain away their opposition to the basic epidemiological method of containment and quarantine.

There is simply no dispute that Ebola needs to be contained in West Africa. This clearly means limiting travel from this region to the United States, and requiring adequate quarantines when U.S. citizens return. Nigeria has done this and has successfully contained its outbreak. Australia became the first of the so-called developed nations to impose a travel ban.

Instead, all the relevant officials are out reciting the party line of no travel bans or quarantines. Ron Klain, a political operative rather than a respected medical leader, is appointed “Ebola Czar” in response to public uproar over the lackadaisical containment strategy of the administration. This is politics, no matter how many times it is called “the science.”

The president just held a staged event with doctors and other volunteers returned from West Africa arranged behind him. He spoke as if some Americans might hold an animus toward these brave volunteers. When the governors of New York and New Jersey imposed their own quarantine requirements for returning medical workers, the White House and the CDC immediately censured them.

What is the political agenda here? Holman Jenkins, writing in the Wall Street Journal, suggests the president doesn’t want to be attacked from his left as racist in not allowing Africans into the country just before the midterm elections. Perhaps he wants to be seen as a savior in Africa, where he has roots. Or perhaps a serious travel ban would draw attention to our porous southern border and the massive recent influx of future Democrat voters.

It gets worse. Instead of travel restrictions, foreign health workers afflicted by Ebola may be airlifted into the United States for treatment. This is the opposite of containment.

When political considerations trump basic medical strategies, proven effective over centuries, the danger can be grave.

Tom Frieden, head of the CDC, initially compared Ebola to AIDS. Though there are many important differences, in one respect they are similar—both diseases have been politicized.

As a medical intern in 1981–1982, I cared for some patients with multiple opportunistic infections during a rotation at Bellevue Hospital. These were the first AIDS patients, years before the term was coined and the offending virus identified. It was immediately obvious that this was a sexually transmitted disease, affecting mostly gay men and intravenous drug users. Because of the stigma attached to the disease, traditional infection control measures such as mandatory reporting, contact tracing, and quarantine were not pursued aggressively.

In 1985 a blood test for HIV antibodies was approved. Rather than testing any and all comers, including all patients admitted to the hospital (as was routinely done for syphilis), barriers were erected. Patients had to give consent and undergo counseling before a test could be ordered. This greatly limited the number of tests performed and allowed the epidemic to spread further. By 1991 there were an estimated 1 million HIV-positive Americans. By 1993, annual deaths from AIDS approached 45,000.

Early aggressive public health measures might have stopped the AIDS epidemic. For lack of them, millions have paid or will pay with their lives.

It is beyond insane to knowingly import Ebola into this country. Treating even one Ebola patient requires a hospital to reorganize, displace existing patients, and train and rehearse staff. And it places the frontline doctors and nurses at risk.

Yes, we can and should do more to stop the spread of the disease in West Africa. We should use what we have learned. The two infected Dallas nurses had a fairly benign course. Both reportedly received plasma infusions from Dr. Kent Brantly, who survived Ebola.

Since Ebola attacks key immune cells and prevents an adequate antibody response, the prompt administration of plasma from an Ebola survivor should be first-line therapy. There are thousands of Ebola survivors in West Africa. We should be sending plasmapheresis equipment and technicians to collect, bank and freeze plasma from them, and use this to fight the disease locally.

Let’s not let politics get in the way.

Richard Amerling, M.D., is an associate professor of clinical medicine and an academic nephrologist at Mount Sinai Beth Israel in New York. He has written and lectured extensively on health care issues and is president-elect of the Association of American Physicians and Surgeons.