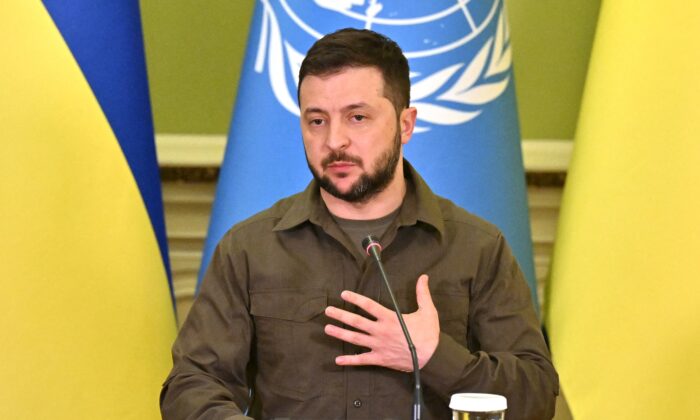 With a population of 46 million and a vast territory that is rich in natural resources, Ukraine was the largest and most formidable of the states to secede from the Russian Federation, in 1991. About half the population is Russian-speaking. Curiously, Leonid Ilyich Brezhnev, the Soviet leader from 1964 to 1982, was actually born in Ukraine and retained a peculiar Ukrainian accent and mannerisms his whole life.

Russian history and the Orthodox religion began in the region, leading celebrated anti-Soviet dissident, Aleksandr Solzhenitsyn, to insist that Ukraine is an integral part of Russia.

Indeed, for 500 years it was. But when the Ukrainians decided to leave the Russian Federation, the Kremlin promptly recognised the region’s sovereignty and territorial integrity.

Ukraine is a multi-ethnic nation and many citizens are ethnic Russians. Do these Russian-speaking Ukrainians have a right to celebrate their own culture, values, and heritage? Apparently not.

The current pro-Western government in Ukraine has enacted a series of laws aimed at the so-called “de-Russification” of Ukraine.

For example, the Zelenskyy government has just banned Russian books and even music from Ukraine. The new law states that only books published in Ukrainian or “the indigenous languages of the European Union” can be published in the country, according to the Ukrainian government.

Henry Kissinger, an American scholar who served as the U.S.’s 56th secretary of state from 1973 to 1977, once said the “West must understand that, to Russia, Ukraine can never be just a foreign country. Russian history began with Kievan-Rus. The Russian religion spread from there. Ukraine has been part of Russia for centuries. The Russian Black Sea Fleet—Russia’s means of projecting power in the Mediterranean—is based in Sevastopol, Crimea (with Ukraine’s longtime agreement).”

On March 20, the Ukrainian government effectively concentrated its power when it banned all opposition parties in Ukraine. Despite failing to provide any evidence linking the opposition to the Russian authorities, the Ukrainian president accused its leaders of putting “their own ambitions and careers about the interests of the state.”

Also, on that day Zelenskyy enacted a decree to nationalise all TV channels into one state-controlled platform, citing his own martial law as an excuse.

According to a presidential press release, “combining all national TV channels” into a single information platform of “strategic communication” was designed to suppress the “active dissemination of information” and “distortion of information.”

The president also removed Ukraine’s general prosecutor and the head of the Security Service of Ukraine on July 17. On social media, he announced that 651 treason cases had been registered concerning workers in Ukrainian law enforcement and the prosecutors’ office. He has vowed to deal very harshly with a significant number of alleged “traitors.”

“They will be punished,” the president said.

Support From the West

Yet despite the questionable nature of some of these wartime measures, the European Commission—the executive arm of the European Union—recently announced its desire to see Ukraine join the Union.

“The Commission recommends that Ukraine be given the perspective to become a member of the European Union,” the commission stated.

On July 4, Australian Prime Minister Anthony Albanese pledged an additional $100 million (US$70 million) of aid to the Ukrainian war effort after a face-to-face visit to see Zelenskyy in Ukraine.

Australia’s total support for the Ukrainian government has now climbed to $390 million (US$270 million). That’s the biggest contribution by a non-NATO nation, and more support than offered by some 30 nations who are actually members of the 32-country grouping devoted to Europe’s defence.

The Australian government has also deployed a formidable number of lethal weapons to Ukraine, including long-distance missiles and heavy ammunition.

According to Senator James Peterson, former chair of the Parliamentary Joint Committee on Intelligence and Security, this “important investment” will “deliver lethal and non-lethal military capability” to Ukraine.

Commenting on March 2, then-Assistant Defence Minister Andrew Hastie stated: “Be in no doubt: that assistance will find its way into the hands of the brave men and women defending Ukraine. It will make its way to the Russian end of the battlefield, and it will arrive violently.”

I find this sort of rhetoric disturbing—especially considering Russia is a nuclear power.

Of course, if the goal is to just punish Russia for what it is doing to Ukraine, then it makes sense. But if the higher goal is to prevent more bloodshed, well, this is simply not the way to do it.