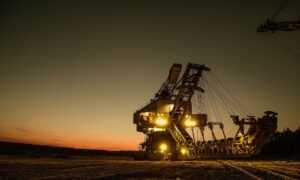 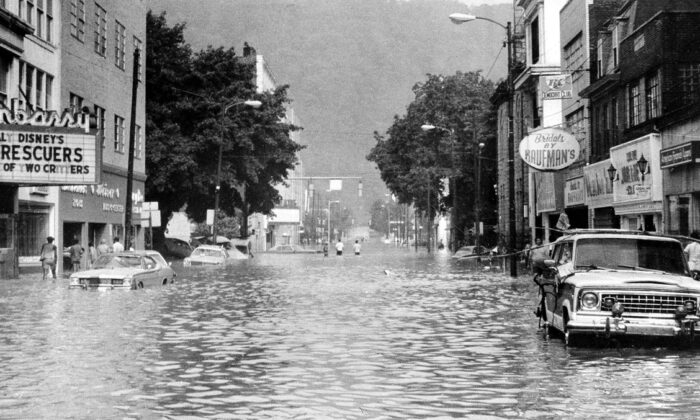 This is a general view of Main Street in downtown Johnstown, Pa., Wednesday morning, July 20, 1977 after floodwaters began to recede. Heavy rain and the breaking of a dam caused the city to be flooded. (AP Photo)
Viewpoints

SOUTH FORK, Pennsylvania—One hundred and thirty-two years later, the truth of what happened here in May 1889 is still difficult to put into words.

Standing on the very soil where Col. Elias Unger, the last president of the South Fork Fishing and Hunting Club, had his home overlooking Lake Conemaugh, you can see from the distance where the Pittsburgh elite had their grand fishing club and elaborate cottages along the shoreline.

Look right and you can also see the remnants of the poorly maintained dam that once held back their pristine private lake. It gave way on May 31, 1889, after days of relentless rain, sending 20 million gallons of water raging down 14 miles toward the city of Johnstown.

With each inch and foot and mile, the force of the water gathered and carried with it trees, boulders, dirt, barns, animals, mud, people (dead and alive) and houses. It flung them all at the unsuspecting town, killing more than 2,000 and causing millions of dollars of damage.

The people of Johnstown had spent that day preparing not for a horrific catastrophe but for the typical post-storm flooding from the Little Conemaugh and Stonycreek rivers. They moved their perishables to the upper stories of their buildings, as they often did to wait out minor floods.

“They had little idea of the fate that awaited them,” National Park ranger Doug Bosley, who manages the three sites that make up the Johnstown Flood National Park, said.

On that morning of May 31, club officials were frantic. They understood the 2-mile-long, 1-mile-deep lake was at its breaking point. “By 3 in the afternoon, those that had gathered to try to stop the inevitable watched in horror as the dam gave way,” Bosley said.

It is said that it hit the town and its people with the force of Niagara Falls.

“Most people only heard it coming,” Bosley said. “Those who saw it and lived described it as a rolling mountain of dirt and trees, building over 40 feet high.”

A life-sized diorama of that wall of debris is the first thing that greets those entering the visitors center, which overlooks the completely intact Unger home. In addition to the wealth of artifacts and scale dioramas, visitors can feast their eyes on a gripping film called “Black Friday,” which leaves the viewer feeling as if he or she were in Johnstown when the flood hit.

Across what was once Lake Conemaugh, the South Fork Fishing and Hunting Club remarkably still stands. So do the elaborate and ornate cottages once owned by industrial America’s famed robber barons. The National Park Service has purchased the club and several of the homes and is painstakingly restoring them.

It is well worth the visit.

None of those club members ever came back after that horrific day. They just left their homes and their resort and walked away. Nor were they ever held legally responsible. The death toll became a national scandal, and their role in the neglect of the dam’s structure made headlines for years.

The elite playground, within months, became a coal town.

You can stand where the dam broke and look down in one direction and out in the other over the expanse of the former lake that emptied off this Appalachian plateau. Once again, it is hard to write any words that do justice to what was lost that day.

Railroad tracks now run where the lake once stood. The long-long-short-long whistle of an oncoming freight train routinely echoes through the valley as it approaches.

The body carried farthest by the ill tide was found in Cincinnati, Ohio. The last body was found in 1911. All told, 99 families perished in the flood, including 396 children. One hundred and twenty-four women and 198 men were widowed. Ninety-eight children were orphaned, and one-third of the dead, or 777 people, were never identified, according to the Johnstown Area Heritage Association.

Walking around the places here, two things stand out. First, one can understand why the lake was built in this spot. The majestic scenery all around is soul-lifting. One is also struck by the dedication that went into preserving this critical moment in American history, first by the locals and then by the National Park Service.

The year 1889 is critically important in the development of our nation. We were 24 years past the ravages of the Civil War and well into the societal shifts that the Industrial Revolution was causing our country.

We had added four new states that year—both Dakotas, Montana, and Washington—the most in 101 years. Coke was first bottled in Atlanta, and the Gilded Age was about to peak. We were changing, and with this moment at the lake, our popular views of the elite were changing as well. This moment, the disappearance of Lake Conemaugh and 2,000 of the inhabitants below, was a pivotal one in shaping how we would regard one another going forward.