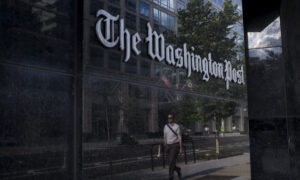 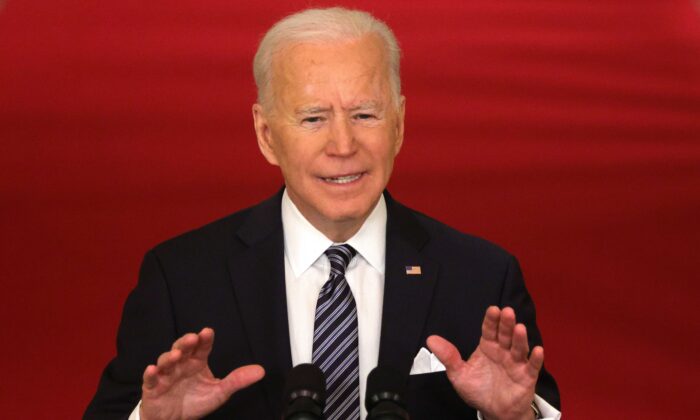 President Joe Biden gives a prime-time address to the nation from the East Room of the White House on March 11, 2021. (Alex Wong/Getty Images)
Viewpoints

The Dawn of a New Age of Tyranny Is Upon Us

If you’re bewildered by the breakneck pace of “change” since the inauguration of Joseph Robinette Biden Jr. on Jan. 20, you’re not alone.

Average Americans have been puzzled and, in many cases, chagrined by the flurry of executive orders, ukases, policy prescriptions, social proscriptions, vengeful rollbacks, and other government meddling in the lives of our citizens. Conservatives, meanwhile, understand that all this activity has one overarching purpose: to punish the bad Orange Man and the country that voted for him. And make sure he never happens again.

To that end, the string of top-down bossiness has been designed to look, and be, punitive. Every major Donald Trump initiative or accomplishment must be negated and anathematized. His supporters who unwisely marched on the Capitol on Jan. 6—what did they hope to accomplish?—shouldn’t just be deplored but hunted down by the FBI for “sedition”; there’s even a tip line for junior Stasis-in-training to rat out their friends and neighbors.

Woke hall monitors must screech like Donald Sutherland at the end of the 1978 version “Invasion of the Body Snatchers” whenever they see a constitutionally free and unmasked citizen daring to appear in public without a slave muzzle.

Meanwhile, “white supremacy” (which is just a leftist term for Western civilization) and rampant “bigotry” (disagreement over political processes and objectives) must be hunted down and eradicated, civil rights suspended, and core provisions of the Bill of Rights overthrown, including all or parts of the First, Second, Fourth, Fifth, Ninth, and 10th amendments. It’s a mad scramble for a Year Zero to rival those of the French and Bolshevik revolutions—the dawn of a new age of tyranny masquerading as compassion.

Why the rush? At first blush, the Democrats ought to be content with their famous victory. They control the White House (whether in the person of Joe Biden or a Committee of Public Safety), have a slim but comfortable margin in the House, and can employ Vice President Kamala Harris as a tie-breaker in the Senate should one of collaborationist Republicans (Susan Collins, Lisa Murkowski, Mitt Romney) somehow manage to resist the temptation to cross the aisle and vote with their good friends in the party of slavery, segregation, secularism, and, well, actual sedition.

You’d think that they’d relax, take a deep breath, and use the next two years to plot how they’re going to ballot-“cure” and -harvest their way to a more secure victory in 2022. Because the democracy-destroying bill known as H.R. 1—amusingly called the “For the People Act of 2021”—is just the beginning.

After all, the fix can never be in quite enough when you need a sure thing.

The Democrats haven’t quickly forgotten the grand takeaway lesson of 2016: that never again must the specter of populism, in the form of what used to be called Jacksonian democracy—raise its misshapen head again. To that end, they’re hurrying to ram through their socialist objectives, demoralize and demonize their political opponents, and arrange the electoral system so that they’ll never lose again.

Instead, rule by experts, academics, and bureaucrats must now be institutionalized. Their model is the ferociously anti-constitutional reign of the racist southern Democrat/egghead Woodrow Wilson from 1913–21, during which racial segregation was reinstated in the federal workforce, the United States launched itself into the bloodiest foreign war in history up to that time, American citizens and foreigners alike were thrown in jail on the slightest pretext, free speech was curtailed, and the media was bent to conform to the White House’s wishes via Wilson’s Orwellian Committee on Public Information, headed by a journalist named George Creel and established in 1917, the year America went to war.

The Creel Committee’s first task was selling the war to the American people, especially the young men who suddenly found themselves drafted into a nearly nonexistent Army and sent to France as cannon fodder. This was tricky, since Wilson had run on a peace platform in 1916—“he kept us out of war” and “America First” were his slogans—against Charles Evans Hughes. Sworn in as president in March 1917, Wilson promptly thrust the United States into the Great War a few weeks later. But with the help of Sigmund Freud’s nephew Edward Bernays, the Austrian-born “father of public relations,” they managed it.

The committee was nothing short of a ministry of information, a full-on propaganda agency that covered everything from newspapers, newsreels, advertising; there was even a government newspaper called the Official Bulletin, which pushed Democrats’ talking points, thus becoming a role model for today’s New York Times and Washington Post. Then, as now, a Democratic administration saw the press as one of its most potent armaments against freedom of speech and thought, and weaponized it accordingly.

Consider the recent “press conference” in which a confused and often rambling Biden, 78, read answers off cue cards to questions from media apparatchiks that had been selected in advance by his handlers. He was provided with a picture book of the White House stenographers camouflaged as correspondents sitting before him, and instructed on whom to call in order to present a simulacrum of a briefing. Unsurprisingly, most of the questioners were young women, and most of the questions had more to do with statements of feelings than an attempt to elicit actual information.

What a contrast to previous administrations! In the televised heyday of John F. Kennedy, the enjoyment JFK took in the give-and-take with the gentlemen of the press was palpable; Kennedy prized his command of facts and enjoyed matching wits with the media. During the Trump administration, the reporters were seething with hostility, rude beyond any earlier measure, unabashed in their loathing.

But the Biden snoozefest, about as spontaneous as the Baltimore Catechism, was simply elder abuse, an attempt to convince a senescent puppet that, at least for an hour, he really was president of the United States. Then, he was off the stage, into the wings, and off to bed.

Biden, however, wasn’t the real object of the charade, nor is he the brains behind the frantic pace of change, hope, and even “rescue” being promulgated in his name. No, the object of the pantomime is … you.

If you—as the media insists you must—believe that Biden is in charge, the country is getting back to “normal,” and that all will be well if we just adjust our understanding of the Constitution a little here and a little there, then you’re either a fool or a glutton for punishment.