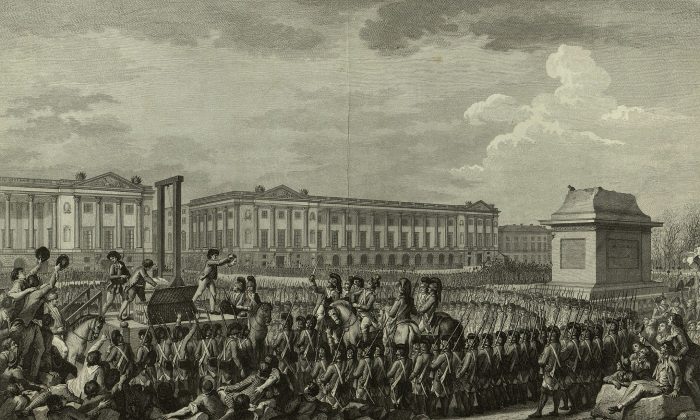 An engraving shows the beheading of Louis XVI during the French Revolution. (Bibliothèque nationale de France)
The Dead End of Communism

The Dark Origins of Communism: Part 2 of 3

The Reign of Terror in the French Revolution laid the foundations from which communism grew. It pushed for an idea of “liberation” that gradually destroyed free will, and was based on a top-down system that sought to establish social good by regulating the beliefs and opinions of the individual.

Communism sustains itself by violently suppressing all other ideas. Its dictators hold that their ideas are Utopian—the end of human progress—and that all ideas contrary to their own should be crushed by force.

Before François-Noël “Gracchus” Babeuf attempted his Conspiracy of Equals, and before his ideas spawned the League of Outlaws, his was just another name within Maximilien Robespierre’s club. Robespierre was behind the bloodiest segment of the French Revolution, the Reign of Terror.

The mistakes they would make would be repeated under the communist regimes that arose in other parts of the world.

The leaders of the French Revolution turned to sweeping laws in chasing their obsession with liberation—and with each new law, they branded new swathes of society as enemies of the “revolution.” Likewise, under communism the doctrine of “the personal is political” became a reason for creating new laws, and similarly, each new law identified a new set of “enemies.”

Soon after Vladimir Lenin took power in Russia through his 1917 October Revolution, he erected a statue of Robespierre, according to “Le Bolchevisme et le Jacobinisme,” written in Paris in 1920 by Albert Mathiez and translated by the communist website Marxists Internet Archive.

This was symbolic, Mathiez wrote, since “Lenin, like all the Russian socialists, is nourished by the history of our great [French] revolution, is inspired by its example, and puts it into practice while adapting them to his country and the circumstances.”

He wrote that both Robespierre’s Jacobinism and Lenin’s Bolshevism were “class dictatorships operating by the same methods: terror, requisition, and taxes, and proposing as a final outcome the same goal, the transformation of society. And not only of Russian or French society, but of universal society.”

Robespierre’s party was from within the Jacobin Club, a radical revolutionary society, which was in turn divided between the liberal Girondins and the radical Montagnards, of which Robespierre was a leading member.

Disagreements between its moderate members and its extremist members would cause much of the chaos the French Revolution would come to be known for. When Robespierre took power in July 1793, the Committee of Public Safety had only recently, on June 2, launched the Reign of Terror, bringing an end to parliamentary democracy within the French Revolution.

“Many Jacobin deputies had already concluded that saving the Revolution required ruthless measures,” wrote William S. Cormack in the book “Revolution and Political Conflict in the French Navy 1789-1794.” Cormack adds that Robespierre believed that “France needed a single will, ‘une volonté une.'”

The movement of state terror can be summed up in a speech from one of its leading participants, Louis Antoine de Saint-Just:

The mass use of violence in the Reign of Terror would begin in early September 1793, after crowds invaded the assembly and demanded it accept the program of their collectivist movement. The Sans-culottes, the lower-class commoners in 18th-century France, blamed the lack of food on farmers, who they believed were hoarding it for themselves. They asked the Jacobins to increase the Terror against the farmers and to push food out of their storehouses with bayonets.

This movement mirrored what would be seen under many communist leaders, from Lenin to Mao Zedong, who launched movements to seize seeds, crops, and even tools from farmers, which triggered even worse famines.

On Sept. 17, 1793, the Committee of Public Safety introduced its Law of Suspects. It declared as guilty anyone suspected of being against the policies of the regime, and violations could include acting suspiciously, associating with the “wrong” people, or saying or writing anything considered out of line. Those who violated this new law were beheaded by the guillotine.

Robespierre explained this concept: “Those who accuse us are themselves accused.”

Between the people and its enemies, there is nothing in common but the sword.
— Louis Antoine de Saint-Just, leading member of the French Revolution

Similar policies were seen under communist dictatorships, when anyone who opposed the various violent revolutions were labeled as “counterrevolutionaries” and were similarly denounced or killed. This was a cornerstone of Mao’s policies during the Cultural Revolution from 1966 to 1976.

On Oct. 24, under the Law of Suspects, among those beheaded first were 22 leaders of the liberal Girondins. This ended the Girondins’ influence in the French Revolution and galvanized the control of the radical Montagnards.

During a purge of the French town of Leon, Saint-Just said,”Between the people and its enemies, there is nothing in common but the sword.”

Lenin would later push a similar concept, under his idea of “partisanship.” There were those who supported the revolution, and those who did not—and the ones who did not support it were marked for destruction. The idea that society should be divided into only two factions, with no middle ground, can still be found in today’s political conflicts.

The French Revolution leaders preached collective good to justify the use of widespread violence. There was a “certain consistency in the Revolution’s appeal to the authority of ‘the People’ to justify violence against the population,” stated Ralph C. Hancock and L. Gary Lambert in the book “The Legacy of the French Revolution.”

The French Revolution leaders preached collective good to justify the use of widespread violence.

While the French Revolution called for principles of liberty, equality, and fraternity, the concept of “total liberty” they proposed is best described as “total anarchy,” said Fr. William Jenkins, in a 1980s segment of the TV show “What Catholics Believe.”

During the Terror, he said, Robespierre and his fellow revolutionaries slaughtered many French peasants. He said based on the extremist logic, “People here had never seen [violence like this] before, people here had never committed a crime, but they had to die so that France could be transformed into a socialist society.”

A smaller and more extreme clique within the Montagnards, known as the Cordeliers Club, would play key parts in this new movement.

The Cordeliers Club founded the first Paris Commune, which ruled Paris during the French Revolution, from 1789 to 1795. Through movements that included the September Massacres, which killed more than 1,200 priests and other prisoners with the aim of eliminating Christianity among the churches and the people, the Paris Commune would be remembered as one of the first institutions of modern state terror.

The Cordeliers Club’s founders were Georges Danton, who played a major role in storming the Bastille, and Camille Desmoulins, who was a childhood friend of Robespierre and a key player in the revolution.

Among this extreme faction was the still more extreme Jacques Hébert, who spawned the Hébertist movement and promulgated the Cult of Reason, a state religion aimed at crushing religion.

The Cult of Reason had been formed by Antoine-François Momoro, but the worship of reason was started by Hébert and Pierre Gaspard Chaumette. The new system rejected the idea of any deity, and in its “explicit religion of man,” it constructed a new “Goddess of Reason” and became the first known state religion of atheism.

“It is such a mockery for Robespierre to have led a procession into Notre Dame to honor the ‘Goddess of Reason,’ and then in the midst of this bloodshed—in the name of liberty, equality, and fraternity—destroy hundreds of thousands of innocent lives,” Jenkins said, referring to estimates the French Revolution killed between 300,000 to 400,000 people by famine, war, executions, and other causes.

The Cult of Reason brought with it the dechristianization campaign to eliminate Christianity and Catholicism in France.

In November 1793, the Cult of Reason launched its Festival of Reason. Priests were publicly shamed and humiliated; men dressed in clerical garments urinated on altars and smashed up churches; religious symbols were removed from graveyards; and farm animals were dressed as priests and put in the churches.

It was a movement all too similar to the destruction of religion and traditional beliefs that came later under Lenin, Mao, and other communist dictators who installed similar systems of state atheism.

The Cult of Reason was marked by indulgent masquerades, lewd acts, and scenes of destruction. It reached such depravity that even Robespierre turned against it.

Robespierre’s answer was a law to recognize freedom of worship, and the formation of his own religion, the deist Cult of the Supreme Being, which worshiped a vague higher power. He launched the cult with his Festival of the Supreme Being in June 1794.

For Robespierre, however, this was the beginning of the end. He was beheaded the following month, on July 28, 1794. This ended his Reign of Terror, although France would still have many rough years ahead before Napoleon Bonaparte restored order in 1804.

Fr. Donald Sanborn said in an episode of the TV show “What Catholics Believe” that “the French Revolution reduced a nation to a mob. Communism feeds off that.”

The French Revolution reduced a nation to a mob. Communism feeds off that.
— Donald Sanborn, Roman Catholic bishop

“Communism is the complete equalization and socialization of a whole nation,” which works by obliterating individual rights, property rights, families, and even the most basic social structures, he said, “and you are—every aspect of your life—is controlled by the state.”

He said, “That is only possible if you break down all of the God-given institutions of men. … If you break that down and say everything is equal before the state, and the state doesn’t even look at families, doesn’t look at the church, doesn’t look at God, and it just looks at individuals, that is the basis of communism.”

He referenced a quote from Pope Pius XI, who declared on May 15, 1931, “No one can be at the same time a sincere Catholic and a true socialist.”

The Dark Origins of Communism: Part 3 of 3