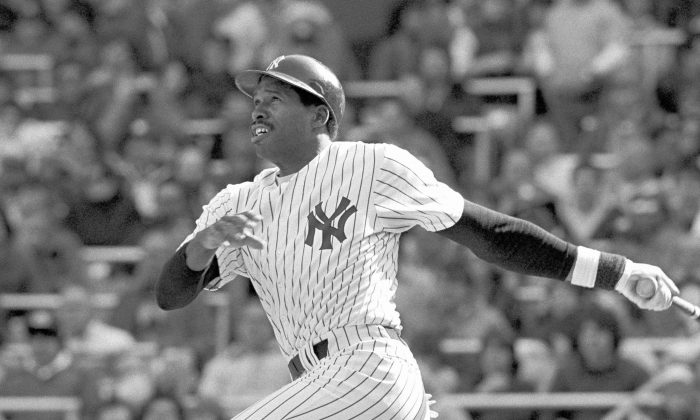 Dave Winfield of the New York Yankees watches his two run homer sail out of Yankee Stadium in the fifth inning of game with the Toronto Blue Jays on Sunday, April 17, 1983 in New York. The homer proved to be the game winning RBI in the Yanks 7-5 win. (AP Photo/Ray Stubblebine)
12- OBSOLETE

Apparently, even though the Bronx Bombers are out of the post-season this time around and did not have much going for them during the 2015 winter meetings, there are enough fans still interested in all things Yankees. So as a result of popular demand—here is the fourth installment of the brain-teaser called ULTIMATE YANKEE QUIZ.

Incidentally, your loyal scribe is hard at work on what is being billed as “The Ultimate Yankee Book” so if you have questions and answers, stories, sidebars, send them along for the book.

Now, let’s get to the quiz:

42. Mickey Mantle hits his final home run, off a Red Sox Pitcher. Who was he?

43. Who has put in more consecutive years as the everyday play-by-play announcer than anyone else in Yankees history?

44. How many attended to make for the record smallest crowd in the history of the Yankee franchise?

46. How many times did George Steinbrenner change the manager during his first twenty-three seasons?

48. Who said “Yankee Stadium was a mistake, not mine, but the Giants.

49. Who played more games for the Yankees than any other player in history?

50. When did the Yankees play at Shea Stadium when Yankee Stadium was being refurbished? _______

52. Who originally designed the Yankees logo?

53  First-baseman Wally Pipp has gone down in history for being the player Lou Gehrig replaced. What other distinction belongs to Pipp?

A. He was a manager. B. He came from the same neighborhood Gehrig grew up in.  C. He was a home run champ. D. He made money endorsing aspirin.

54. Who was the first major leaguer to hit two grand slams in the same game?

55. Who played the most games for the Yankees?

49. A. Mickey Mantle played more games for the Yankees than any other player, with 2,401.

52. The interlocking NY logo was originally designed by Louis C. Tiffany for the NYPD valor medal.