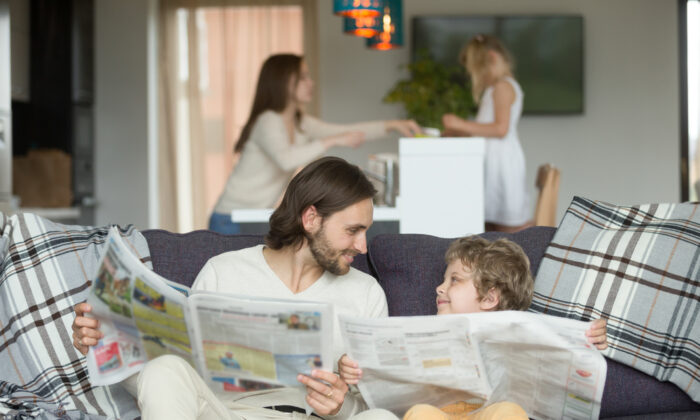 The Dangers of Becoming a Stay-at-Home Dad

In 2018, The Atlantic published a rather interesting essay extolling the virtues of men who decided to sacrifice their careers to raise their children. In doing so, their wives became the primary breadwinners.

The essay, aptly titled “How Stay-at-Home Dads Are Redefining Manhood,” celebrated these supposedly brave men. However, the redefinition of manhood comes with significant costs.

Some might argue that manhood never needed to be redefined in the first place. But it has been. Drastically so. After all, men can now have babies. Haven’t you heard?

From Shanghai to San Francisco, an increasing number of men are opting to become stay-at-home dads. What will this mean for society? And what, if any, dangers await us in the future?

Now, before I am accused of being a cretinous, knuckle-dragging ignoramus (it wouldn’t be the first time), let me state the following: this is not an attack on men who opt to become stay-at-home dads. This is a free world, and people can do as they wish (within reason, of course).

The rise of the stay-at-home dad is a very recent phenomenon. It’s closely tied to the idea of “bucking” social norms and reversing traditional gender roles. The two most important words in that previous sentence are “norms” and “traditional.” Of course, norms and traditions are not always perfect. However, they are significant when it comes to gender roles and romantic relationships.

This is not to say that dads shouldn’t play a significant role in a child’s life or that all mothers should stay at home. Not at all. This is to say that, traditionally speaking, men have been the primary breadwinners, and men have always worked outside of the home.

By reversing thousands of years of tradition, we should expect to see some rather profoundly negative impacts. We are, after all, the products of tradition.

We must look at the rise of stay-at-home dads objectively, not emotionally. Today, close to a third of American wives in heterosexual dual-income marriages earn considerably more than their husbands. For many feminist-oriented authors, this is something to be celebrated.

From a traditional perspective, however, serious questions must be asked. Studies show that marriages tend to struggle when women earn more than their husbands. According to a recent University of Chicago study, marriages led by female breadwinners are 50 percent more likely to end in one of the partners filing for divorce.

Moreover, the husbands, many of whom feel emasculated, are more likely to cheat. With stay-at-home moms, depression is a very real issue. Of course, men are also prone to experiencing depression, especially those who feel emasculated. In fact, as research shows, men who experience downward mobility (for example, slide down the social ladder) “take the blow much harder than women in the same position,” according to Science Daily.

It’s (No Longer) A Man’s World

It’s a man’s world, or so we have been told. However, when James Brown crooned those lyrics, he referred to red-blooded, American men. Remember them?

He was referring to the type of men who actually made things for a living—cars, buildings, and of course, money. But those days are coming to an end. Today, to secure a high-paying job, one requires a respectable degree (not always, but usually). In the United States, 60 percent of college degrees are now earned by women.

This brings us back to stay-at-home dads. Hypergamy, the practice of a person (usually a woman) marrying a spouse of a higher caste or social status than themselves, is real. Women gravitate toward a man with prestige and status. Whether or not you think being a stay-at-home dad should be recognized as a legitimate job title is not the point.

I reached out to Richard Cooper, an entrepreneur and author of “The Unplugged Alpha,” for comment on the matter. “Truthfully,” he said, “women really struggle admiring a man she can’t look up to.”

Cooper continued, “No man playing ‘Mr. Mom’ is ever pined for by women.” Instead, women “pine for the shirtless, buff, firefighters in calendars, not ‘Mr. Mom.'”

They want a CHAD, not a SAHD (stay-at-home dad). It’s very difficult, if not impossible, to be both a CHAD and a SAHD, ask any honest woman. Cooper urges us to “take a look at any stay-at-home dad” because this type of man “isn’t the apple of her eye; he’s an accessory to her life.”

Cooper, a man who has written and spoken about the topic of marriage in great detail, argues that it’s odd to come across a woman who gets “excited about dealing with a man, over the long term, that makes less money than she does,” mainly because women “want to look up to a giant, not down to a beta.”

Cooper accurately added, “One of the precursors to divorce is when a married couple has been living as ‘equals’ both working in their own respective careers, and she gets a big pay rise and promotion, but he keeps skipping along the bottom.”

This is why Cooper tells his male clients “to chase excellence, not women.”

In short, men “can’t relax in a marriage.” They must always “chase excellence and make something of themselves in life.” Become a master of something, be it writing, wrestling, and/or making money. With stay-at-home dads, Cooper, a father himself, believes that “nobody looks upon these men as heroes.” They are, in fact, “accessories.”

He finished by stating the following: “There’s a reason why when history celebrates great men, there are no ‘stay at home’ dads mentioned. They are all forgotten.”