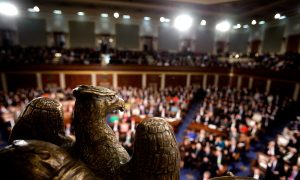 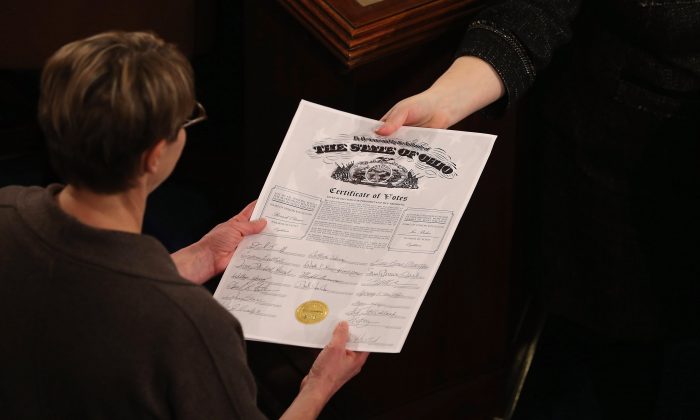 Congressional clerks handle an Electoral College certificate in the House of Representatives, in Washington on Jan. 4, 2013. (Chip Somodevilla/Getty Images)
Viewpoints

Elizabeth Warren is on the bandwagon. Kamala Harris is, too.

Impatient Democratic power brokers are trying to sell Americans on scrapping the Electoral College. While they claim to care about the will of the people, their actual reasons are quite reckless. Fortunately, in this divided era, the brilliance of the founders will thwart them.

The Democrats have won four of the last five popular votes in presidential elections. But they didn’t win the presidency two of those times. That bothers them immensely, and that isn’t all that bothers them.

They think they can cement a ruling Democrat majority of voters in the near future—if only they had the presidency. The Democrats believe that if enough Americans are dependent on government, they will be bound to vote Democrat each election. Barack Obama said as much before he was president.

Given that our state, local, and federal governments will spend and hand out nearly $7.5 trillion in 2019, they certainly can make a case for creating dependency. After all, nearly cradle-to-grave spending on education, health care, and retirement does impact voting preferences—not to mention transportation funding and other programs.

More than 200 years later, however, the founders are smiling. Their genius, embodied in the Constitution, specifically sought to thwart such mass appeals to major changes in our Republic.

Indeed, the system of a people’s House and a more deliberate Senate was designed to slow the legislative process. A president with veto power was part of the same grand plan. Overall, the possibility of divided government was in their slow-down plan as well.

They wanted all that because they saw the efficiency of an all-powerful king of England with a power-hungry agenda. They wanted to slow growth in government because they studied and understood how runaway populism played major roles, amidst deadly violence and socialist policies, in the downfall of Rome and ancient Greece.

They flat out didn’t want that for the United States. As John Adams recognized: “Democracy never lasts long. It soon wastes, exhausts, and murders itself. There never was a democracy yet that did not commit suicide.”

To avoid that, our founders built in safeguards overall and especially with division in mind.

Returning to the Electoral College, everyone by now should know that it was part of a grand compromise to get small states like Delaware to join a united set of states under the Constitution. The smaller states, with good reason, assumed the larger states like Virginia that dwarfed Delaware in size and population would rule over them. The Electoral College was meant to give smaller states a voice into the future—and so it does today.

Yet a simple truth remains. Alexander Hamilton worried that the colonies under the Articles of Confederation were at risk for civil war, and George Washington wrote that it was either this Constitution or “the next one would be drawn in blood.” Because of their forethought, we have a union today and small states have a stabilizing voice.

But there is one more gem to consider.

Changing the Constitution was made immune to unchecked populism as well. Because it takes a vote of three-quarters of the states to amend the Constitution, no Constitutional amendment to discard the Electoral College is likely for decades—if at all.

In this divided era, nearly 30 states are red or lean red. Fewer than 20 are blue. They are the big states to be sure—California, New York, Illinois, and others—but they are not enough to bulldoze the Constitution. It’s true that some of those blue states are pushing legislation to have their electoral votes go to the popular vote winner. Those states vote blue already, however, so that likely won’t change much and can be undone.

In the meantime, once again, our founders have proven far smarter than the politicians of today who want to make the United States socialist or risk policies that would place us on socialism’s doorstep—or even worse, as John Adams warned.