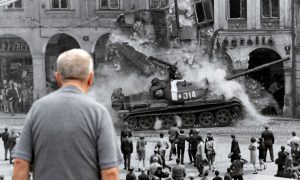 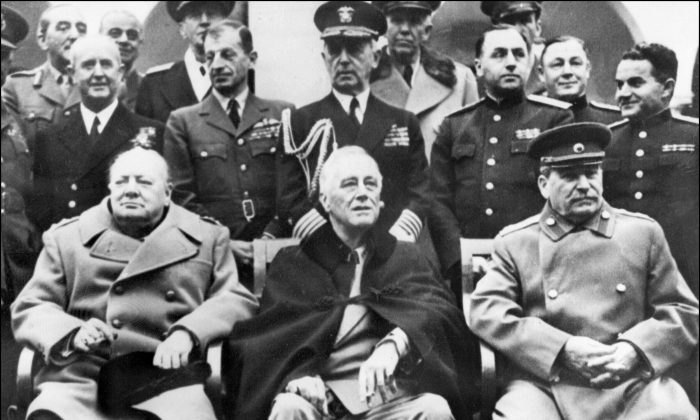 The Danger of Communist Monopoly on Media, Firearms

A lesson from history

By February 1945, victory in Europe in World War II was within sight. At the infamous Yalta Conference, President Franklin Roosevelt agreed to let Soviet leader Josef Stalin have all of eastern Europe and some of central Europe as a Soviet sphere of influence. Stalin promised to uphold democracy within his new dominions.

Over the next few years, Stalin worked to replace the free governments with puppet communist dictatorships. As Winston Churchill noted in a famous speech on March 5, 1946, “An iron curtain has descended across the continent. … The Communist parties, which were very small in all these Eastern States of Europe, have been raised to pre-eminence and power far beyond their numbers and are seeking everywhere to obtain totalitarian control. Police governments are prevailing in nearly every case, and so far, except in Czechoslovakia, there is no true democracy.”

Democracy in Czechoslovakia survived until the spring of 1948, when it was exterminated by what the Czechoslovak communists described as “the revolution from above,” according to Paul E. Zinner’s book “Communist Strategy and Tactics in Czechoslovakia, 1918–48.”

When the Czechoslovak coalition government was forming in 1945, the communists demanded, and got, the cabinet post of Ministry of the Interior, which was in charge of the police. Non-communists were purged from the police, and the police force converted into an armed instrument of the Communist Party.

To protect Sudetenland industrial installations from attacks by German-speakers who had supported the Nazis, armed “factory guards” were created, comprising factory workers. But the German danger soon vanished, as the German population was forced to leave Czechoslovakia and settle in Germany proper. Nevertheless, the now-vanished danger of pro-Nazi Germans was used as a pretext for keeping the factory guards as an armed reserve, a “Workers’ Militia.” The militia’s purpose was to be ready to assist a communist coup, while receiving arms from secret caches.

Within the police, the communists’ main force was the Security Police. This was supplemented by police “mobile detachments”—paramilitary forces.

The police made all sorts of accusations that leaders of the democratic parties were foreign agents and were plotting a coup. Actually, the communists were the ones planning a coup, and they were willing minions of the Soviet tyrant Stalin.

The crisis began to come to a head in February 1948. Illegal communist caches of arms for the Workers’ Militia had been discovered. The communist-run Security Police announced the eight police divisional commanders in Prague would be fired and replaced by communists. Since divisional commanders were in charge of arms supply to police officers, the implication was that arms would be distributed only to pro-communist police.

Against strong communist opposition, the National Assembly annulled the police commander appointments and passed a resolution to create a special committee to investigate the police. An essay in the Svodobné Slovo newspaper, “We Will Not Permit a Police Regime,” documented what communists had been doing to the police and exposed the abuses of the Ministry of the Interior.

“The Communists knew that we had touched the sore spot, and that our campaign against the police regime imposed by them could have profound repercussions on the elections, if these took place under normal circumstances. Hence their decision to prevent free elections by any means. Obviously they could succeed in this only by stifling by violence the democratic forces of the nation,” Hubert Ripka, a minister in the former democratic government, recalled in his book “Czechoslovakia Enslaved, The Story of A Communist Coup D’Etat.”

The communists mobilized their Workers’ Militia and other paramilitaries. Quickly, Prague was occupied by armed communist forces, who began arresting political opponents. It was reminiscent of the first days of occupation by the Nazi SS in 1938. The same tactics were used in Bratislava, the Slovak capital.

In Czechia, the paper mills had been nationalized, and their pro-communist managers cut off paper supply to opposition newspapers. In Slovakia, the pro-communist printers union refused to print the opposition press.

Students poured into the streets of Prague, and demonstrated for two days in support of democracy. But they were soon “brutally repressed by the police,” according to Ripka.

Czechoslovak President Edvard Benes could have called out the army, which hadn’t yet been taken over by the communists. But no one was sure what the army would do. In any case, if the Czechoslovak army had defended the republic, Stalin’s Red Army stood ready to intervene on behalf of the communists.

Benes capitulated, and handed his country over to foreign totalitarians. The government’s decision to surrender was based on the fact that if they successfully resisted the Czechoslovak communists, they could not stop the Red Army. The U.S. ambassador had informed the Czechoslovak government that the United States would not intervene against a communist takeover.

Not knowing that Benes had already acted, a group of nearly 10,000 students marched to the presidential residence to try to persuade him to stand firm. The Workers’ Militia and the Security Police arrived, but as they approached, the students began to sing the National Hymn. The police respectfully stopped and stood to attention. Once the song was over, the communist police commander gave the order to attack. Several students were shot, hundreds were wounded by clubs, and more than a hundred were arrested.

Following the coup, the Workers’ Militia were kept in Prague as a visible manifestation of the new dictatorship’s power. They used machine guns to break up a parade in St. Wenceslas Place that had been organized by one of the democratic parties.

The Social Democrat Party was Marxist in ideology, but the vast majority of its members were opposed to the coup. With the cooperation of traitors in the party, the Social Democrats were quickly eliminated.

The Svodobné Slovo newspaper, which had published the expose of the communist police, was occupied by police from the Ministry of the Interior.

Ripka recalled, “My heart bled at the sight of these poor people who saw themselves reduced to slavery for the second time in 10 years, without having a chance to defend themselves without being able to cry out in despair.”

Soon, Czechoslavaks were forced to attend mass rallies in support of the new dictatorship. It was like during the Nazi occupation, as one student recalled to Ripka: “The same promises, the same enthusiasm, which rang false, the same discipline of a crowd kept in awe of the machine guns.”

Once again, listening to foreign radio was outlawed. Concentration camps were established, judicial independence was eliminated, and arbitrary arrest and torture became the norm. The Czechoslovak economy was converted to serve the Soviet Union. The same system under the Nazis had been called Raubwirtschaft (economy of brigandage). The English word is kleptocracy (rule by thieves).

According to New York Times reporter Dana Adams Schmidt, who covered Czechoslovakia during and before the coup, “It seems obvious from the preceding points that the anti-communists should have organized a paramilitary force. Paramilitary forces are illegal almost by definition and are not a pretty thing, but the non-communist political parties would have been justified in organizing such a force considering what the communists were doing.”

Although the government had capitulated, popular resistance to the new totalitarian rulers began quickly. In May 1949, a truckload of armed resisters unsuccessfully tried to break into the Litomerice prison, and liberate the political prisoners. The prison liberation was intended to be the signal for a national uprising, for which extensive preparations had been made. However, government spies had infiltrated the resisters and reported the plans. Small partisan groups operated in the hills for at least the next two years, but all were eventually destroyed by the Workers’ Militia, the police, or the army.

Starting in 1949, a push began to bring the Czechoslovak Catholic church under communist government control. When the bishops defied the government, the government began arresting priests who supported the bishops. The arrests provoked riots in parts of Slovakia.

“Peasants armed with clubs, scythes and pitchforks defied the police who arrived in these villages to arrest the priests,” wrote Schmidt in his book “Anatomy of a Satellite.” Although the peasants had some initial success in driving off the police, the peasants were eventually suppressed by the Workers’ Militia.

The Czechs and Slovaks had suffered under Nazi tyranny from 1939 until 1945. Now, they were again under the totalitarian boot, and would remain so until 1989, when the communist Evil Empire finally collapsed, because of the strong policies begun by President Ronald Reagan in 1981.

Once free, the Czechs and Slovaks soon decided on an amicable divorce and created separate republics. Today, their freedom, like freedom everywhere in the West, is again in peril, as new generation of proto-totalitarians are hard at work to destroy dissent from “socialist” orthodoxy and to eradicate the right to arms and self-defense.

David Kopel is an associate policy analyst at the Cato Institute in Washington. His most recent book is “The Morality of Self-Defense and Military Action: The Judeo-Christian Tradition.”

David Kopel
Contributor
Follow
David Kopel is an Adjunct Scholar at the Cato Institute, in Washington. His most recent book is "The Morality of Self-Defense and Military Action: The Judeo-Christian Perspective."
TOP NEWS