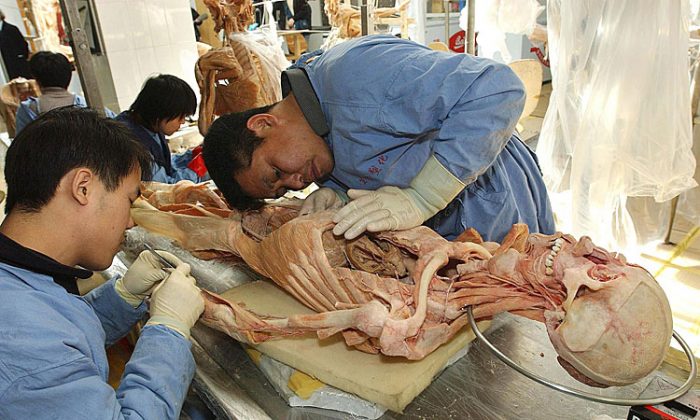 The Dalian Business: How Gu Kailai Turned Persecution Into Profit

The trial of Chinese billionaire Gu Kailai for the murder of British businessman Neil Heywood has been a sort of show trial. The point of the drama has been to hide great criminality rather than to publicize it.

According to accounts in state-run media, the court accepted Gu’s confession that she murdered Heywood out of fear that he might harm her son. It is also entertaining arguments from Gu that would justify leniency in her sentence, including remorse and a mother’s anxiety.

If the court had chosen to look into the business relationship between Gu and Heywood, they would have found the pair had profited over the course of 13 years from the murders of hundreds or thousands of individuals—the number of victims can only be guessed at. Those are the crimes that the proceedings in Hefei City Intermediate People’s Court have been meant to obscure.

The story began in Dalian City in northeastern Liaoning Province in 1999. Gu’s husband, Bo Xilai, had been mayor of the seaport city for six years. He chafed at his lot, seemingly exiled from the higher reaches of power.

Gu shared his discontent. Beautiful, stylish, tough, and smart, holding a master’s degree in politics from Beijing University, Gu struck at least one American, according to the Wall Street Journal, as the Jacqueline Kennedy of China. Dalian was too small a stage for her.

A conversation Bo had with then head of the CCP Jiang Zemin would change things forever for Bo and Gu.

The journalist Jiang Weiping reported this conversation in an article he published in 2009 after immigrating to Canada. In 2002 Jiang Weiping had published an article accusing Bo of corruption, and Bo rewarded him by arresting him on charges of exposing state secrets and inciting subversion and then had him sentenced to seven years in prison.

“You must show your toughness in handling Falun Gong much like the toughness shown by Hu Jintao in handling the 1989 Tibetan riot; it will be your political capital,” Jiang Zemin told Bo.

Bo and Gu did not need any more encouragement. While many top central Party officials and provincial officials were less than enthusiastic when Jiang Zemin launched his campaign to eradicate the spiritual practice of Falun Gong on July 20, 1999, Bo and Gu seized on it as their ticket out of Dalian.

The city quickly became a hellhole for Falun Gong practitioners, and Bo’s ascent began. In 1999 he was named the head of Dalian City CCP—the most powerful position in Dalian. In 2000 he was named acting governor of Liaoning Province and then in 2001 governor. By 2002 he was a member of CCP Central Committee and had vaulted into national prominence.

Meanwhile, Falun Gong practitioners were flooding Beijing, seeking to tell the CCP to stop the persecution. The prisons and labor camps in Beijing and the surrounding areas were overflowing. Bo saw another opportunity to ingratiate himself to Jiang Zemin.

Bo arranged to fill his newly refurbished facilities with the overflow from Beijing, so that his prisons and labor camps came to hold practitioners from all parts of China. In particular, Bo took those practitioners who were arrested in Beijing but refused to reveal their names.

While Bo and Gu first saw the persecution as a chance to climb up the CCP’s ladder, Gu quickly saw in all of the practitioners crowding Bo’s new jails something else: a chance for immense profits. According to a source familiar with the matter, Neil Heywood was there with her from the beginning as a trusted aide as she began making money from the organs and bodies of the practitioners.

In August 1999, Gunther von Hagens opened the first corpse-processing factory in Dalian. Using a process von Hagens says he invented in the 1970s called plastination in which bodily fluids are replaced by polymers, the factory preserved human bodies for display and research.

In 1995, von Hagens had begun mounting exhibitions of his preserved bodies, turning his invention into a profitmaking industry. In fact, the exhibitions that von Hagens and his competitors mount in tours around the world have attracted audiences in the tens of millions and earned receipts in the hundreds of millions of dollars.

The factory was approved by the Dalian Bureau of Foreign Trade and Economic Cooperation and the Dalian Industrial and Commercial Administrative Management Bureau, with Bo personally involved in approving the registration.

Requiring an initial investment of US$15 million, the factory was located in the high-tech development zone of Dalian, a beautiful place close to the ocean and at the foot of mountains.

Von Hagens told the New York Times that he had set up the factory in Dalian because he had found cheap labor, eager students, few government restrictions, and easy access to Chinese bodies, which he said he primarily uses for experiments and medical research purposes, not for his exhibitions.