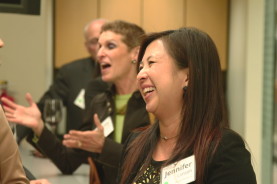 Leveraging your network is a delicate dance in the business world. Heed these faux pas, and you're on your way to managing excellent business relationships
News

The Currency Of Compassion: Leveraging Your Network With Perspective

Network management is like wine: The more you expose yourself to it, the more you appreciate its nuance. Once you’ve achieved a certain level of expertise (and hopefully enjoyed a few glasses of nice Burgundy along the way), you’re off-and-running toward network management’s fourth stage: leveraging your network, or as I like to refer to it, flexing some communicative muscle.

Connecting people with one another certainly reinforces your influence. Think of those introductions as your network currency; you are as valuable as your relationships. But here’s the nuance: You must network with perspective. In other words, don’t try to mimic what you read in “Three Steps to Building a Strong Network” without factoring compassion into your equation. As you begin to actively connect people, it also helps to remember the words ‘authentic’, ‘thoughtful’, and ‘impactful’.

Somehow, many of us with extensive networking experience have remained a little wet behind the ear in some aspects of being an effective networker, myself included. But, being in an entrepreneurial position for the past few years, I’ve come a long way toward applying the skills and the senses that the true networking legends exhibit. Let me share with you some networking faux pas, roadblocks and social pressures that had clouded my thinking in the past, devaluing my currency. Learn to work through these scenarios, and you’ll be transformed into a more effective part of your own network.

The words “I have nothing to offer” should never cross your mind. No matter what stage of your career you find yourself in, you always have something to bring to the table. It may not be an introduction that you have to offer at this moment, but you certainly can brandish a morsel of expertise or even an alternative point of view. Asking great questions and looking at a situation with fresh eyes are other highly valuable contributions to folks in your network, requiring nothing but presence and a genuine interest in the other person.

A Favor With No Flavor

“How can I help you?” Have you been the recipient of this modern networking approach? So many times, after I’m introduced to someone, the first meeting or phone call begins with their asking of this disingenuous question. Then, the hair on the back of my neck promptly stands up. Of course, the person may have good intentions, but their statement is in danger of either communicating a sense of apathy, or an objective to move things along without understanding your brand or your unique value proposition. If ever you’re compelled to take the “how can I help” approach, remember that this meeting is just a first date…instant results are overrated. First get a feel for the person and assess if you want to work with them. Then, get a sense of how you can be helpful to them in the future. For example, ask questions about their ideal referral sources to get an idea of what their perfect client looks like.

Beware of promiscuous introductions from others. At the beginning of my corporate career, I didn’t even know it was happening to me until it was a bit too late. A new contact had introduced me to about a dozen people within 2 months of our meeting. Before long, I noticed a problem: There were no synergies, no commonalities, and I was squandering too many hours finding this out. As it turns out, this person was just randomly introducing me to everyone in her BNI, without putting any thought into her matchmaking. It’s sort of like throwing different foods against a wall to see what sticks. In this case, it was too many apples and oranges.

“Even Steven” And His Sibling “Hard To Shop For”

I hear story after story about a giver doing a favor for another, and nothing comes back his or her way in return. Then, there are the ‘takers’, as Adam Grant eloquently describes in his book Give and Take. These are the ones who never return those favors. But one favor unreturned does not a taker make! The goal is to avoid becoming either one of these examples, and to instead aspire to be like Even Steven. In his world, each time the opportunity presents itself, he gives and receives the appropriate favors within his network. He does, however, encounter a roadblock from time to time….his sister “Hard To Shop For”. You’ve met her; She’s given you multiple thoughtful introductions, but you haven’t given her any, because you either don’t have the type of referrals in your network that she could benefit from, or you’re not clearly understanding what her ideal client looks like. Don’t feel ashamed. Keep her at top of mind for when the right opportunity arises. It’s better to hold out for the appropriate contender than to introduce her to three mismatches.